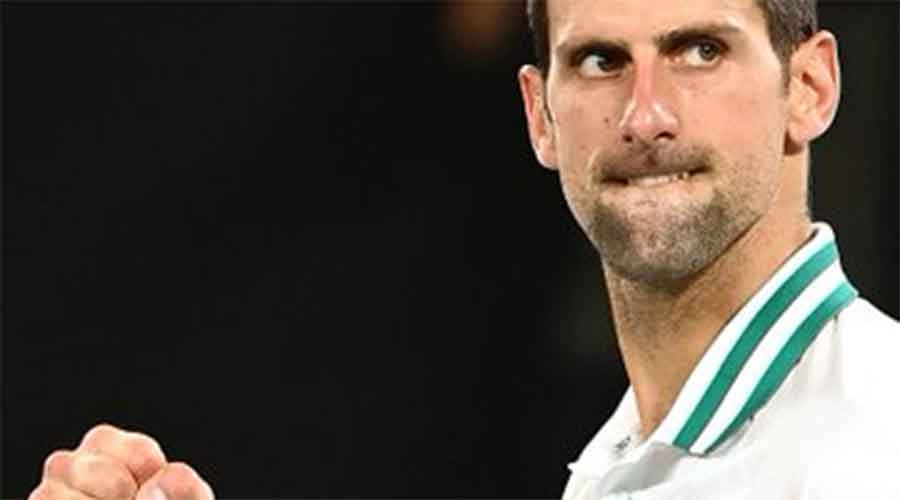 Defending champion Novak Djokovic declared himself fighting fit for the Australian Open final after ending the incredible run of Russian qualifier Aslan Karatsev with his “best match” of the tournament on Thursday.

The Serbian world No.1 eased into his ninth decider at Melbourne Park with a 6-3, 6-4, 6-2 win under the lights at Rod Laver Arena and will battle either Stefanos Tsitsipas or Daniil Medvedev for the title.

Djokovic’s tournament appeared on a knife edge when he suffered an abdominal injury during his third round match against Taylor Fritz less than a week ago. Yet he has put that aside and will have two days off to recover before Sunday’s final.

“This is the best I felt during the entire tournament,” he told Jim Courier on court. “Felt great, I could swing through the ball, no pain, just best match so far, and it came at the right time and I’m thrilled to feel this way. Recovery is priority right now. I’m feeling the ball well, I’m playing well, I had enough match play, enough practice so right now it’s just gathering all the necessary energy for the most important match of the Australian Open.”

While Karatsev would have been regarded one of Djokovic’s more unlikely semi-final opponents, the world No. 114 put up a decent show at Rod Laver Arena as fans returned to Melbourne Park following a five-day lockdown.

He broke Djokovic twice in the match and came back from 1-6 down in the second set to briefly rattle the Serb.

“We need to give him a hand. Huge congratulations to him,” Djokovic said of the 27-year-old Karatsev, who reached the main draw of a major for the first time after failing to qualify at nine previous Grand Slams.

Serena Williams broke down in tears and cut short her post-match news conference after her 6-3, 6-4 defeat to Naomi Osaka ended her bid for a record-equalling 24th Grand Slam title.

Serena won her last major title in 2017 at Melbourne Park before taking a break to give birth to daughter Alexis Olympia, and has lost four major finals since returning to tennis in 2018.

The 39-year-old, who is one Grand Slam title short of Margaret Court’s record, walked off Rod Laver Arena to a standing ovation, pausing for a moment to put her hand on her heart and wave to the crowd.

Asked whether her defeat to Osaka was just a “bad day at the office” she choked. “I don’t know. I’m done,” she said, leaving the room in tears.

Before Thursday, Serena had looked her sharpest in years at the tournament but 24 unforced errors proved costly against Osaka, who also beat her in the 2018 U.S. Open final.

Set to battle Jennifer Brady on Saturday for a fourth Grand Slam title by the age of 23, Osaka is rapidly developing an aura similar to that of Serena.

Brady ensured there would be at least one American in the final after battling to a 6-4, 3-6, 6-4 win over Karolina Muchova. On a stifling afternoon at Rod Laver Arena, former college player Brady dug herself out of a mid-match hole to reach her first Grand Slam decider.