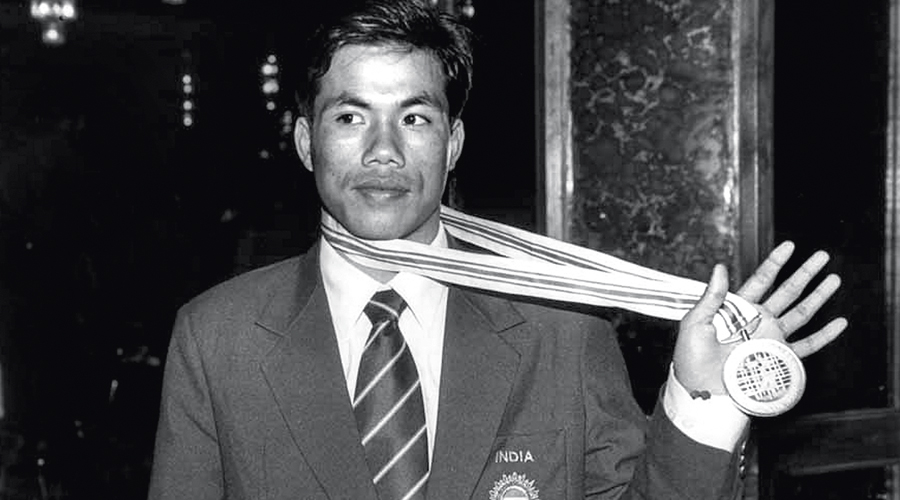 Asian Games gold medallist boxer Ngangom Dingko Singh, who inspired a generation of Indian pugilists with his swashbuckling ring craft and flamboyant personality, lost his bout with cancer at his native Sekta village in Imphal East on Thursday morning.

He was 42 and is survived by his wife, son and daughter. Dingko had been fighting liver cancer since 2017. His health woes were compounded by jaundice and Covid-19 last year.

The former bantamweight boxer, who was employed with the Indian Navy, shot into limelight when he filled the drought-hit coffers of the Boxing Federation of India with a gold medal at the Bangkok Asian Games in 1998. Before Dingko, the last high for Indian boxing was Kaur Singh’s gold at the 1982 Asian Games in New Delhi.

On way to the final in the 54kg category in Bangkok, Dingko punched above his weight as he outboxed Thai star and crowd favourite Sontaya Wongprates in the semis. The diminutive boxer then shocked all when he felled the highly rated Timur Tulyakov of Uzbekistan in the final. Tulyakov was the world No.5 in his category at the time.

But the legend of Dingko Singh is not just about glory, it is also about the fight he fought on way to stardom. It is interesting to note that Dingko wasn’t the original pick for the 1998 Asian Games and made the cut only after registering his protest by “threatening to commit suicide”.

Born and brought up in a poor peasant family from Sekta Mayai Leikai in Imphal East, Dingko had a passion for sports from an early age. But it was only in 1990 that he could pursue his dream when he joined SAI/SAG in Imphal.

Just one year into his training, Dingko claimed his first gold medal in the sub-junior championship 1991 held at Ambala.  Dingko received the Arjuna Award in 1998 and was conferred the Padma Shri in 2013. In 2013, he joined SAI/SAG as a boxing coach.

Since Dingko’s rise to prominence, more than eighty boxers from Manipur have shone at the national and international levels. The legendary MC Mary Kom, who considers Dingko her idol, is one of them.

The six-time world champion told PTI: “He was a rock star, a legend, a rage. I remember I used to queue up to watch him fight in Manipur. He inspired me. He was my hero. It is a huge loss. Life is so unpredictable.”

Dronacharya awardee Leishangthem Ibomcha Singh, the in-charge of the SAI/STC centre in Imphal, paid rich tributes to Dingko. “It is a great loss for the boxing fraternity,” he said.

Dingko remained a fighter till the end. He was airlifted to Delhi last year after it came to light that the lockdown had prevented him from getting crucial radiation therapy for his cancer.

Upon landing in Delhi, a bout of jaundice did not allow for the therapy to be carried out. He went back to Imphal in an ambulance and contracted Covid-19 and spent a month in hospital to recover from the infection. “It was not easy but I told myself ‘ladna hai toh ladna hai’. I was not prepared to give up, no one should,” he had said upon recovery.