World champion KelseyLee Barber of Australia stole the gold with a final round throw of 64.43m from compatriot Mackenzie Little 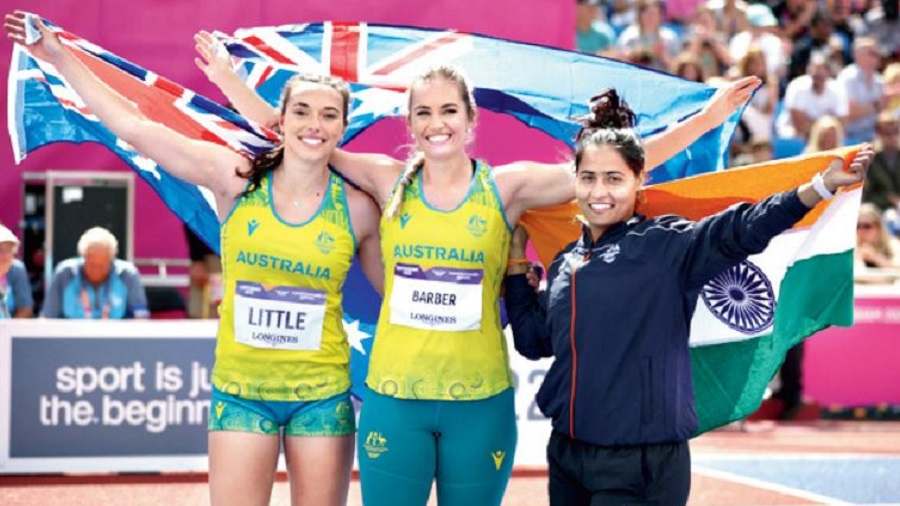 Annu Rani (right) celebrates with the Australian duo of Kelsey-Lee Barber (centre) and Mackenzie Little after the women’s javelin event
Twitter
Our Bureau And Agencies   |   Calcutta, Birmingham   |   Published 08.08.22, 04:30 AM

Annu Rani became the first Indian female javelin thrower to win a medal, a bronze, in the Commonwealth Games on the penultimate day in Birmingham on Sunday. Rani sent the spear to a distance of 60m in her fourth attempt to finish third.

World champion KelseyLee Barber of Australia stole the gold with a final round throw of 64.43m from compatriot Mackenzie Little (64.27m) who was leading at the end of the penultimate round. Before Rani, Kashinath Naik and Olympic champion Neeraj Chopra had won a bronze and a gold in the men’s javelin throw, respectively.

The 36-year-old Indian race-walker showed a brilliant display of fight and grit en route to the medal. Sandeep made a bright start to the final, leading the 10-men group after the first 1,000m in the race as he clocked 3:50:06. However, he dropped to three and remained in that position for the next 2000m. At the half-way mark in the race, Sandeep remained first before dropping two positions again at 6000m point.

Over the next 4000m distance, Sandeep continued to see-saw between third and second position before eventually being overtaken by Australia’s Tingay.

The Indian mixed doubles pairof Saurav Ghosal and Dipika Pallikal won the bronze medal in the squash event. The duo hardly broke a sweat as they prevailed 11-8, 11-4 over the Australian combine of Donna Lobban and Cameron Pilley in the bronze medal playoff.