Advertisement
Home / Sports / ‘All in the head’: Virat Kohli on lack of preparation time before WTC Final

‘All in the head’: Virat Kohli on lack of preparation time before WTC Final 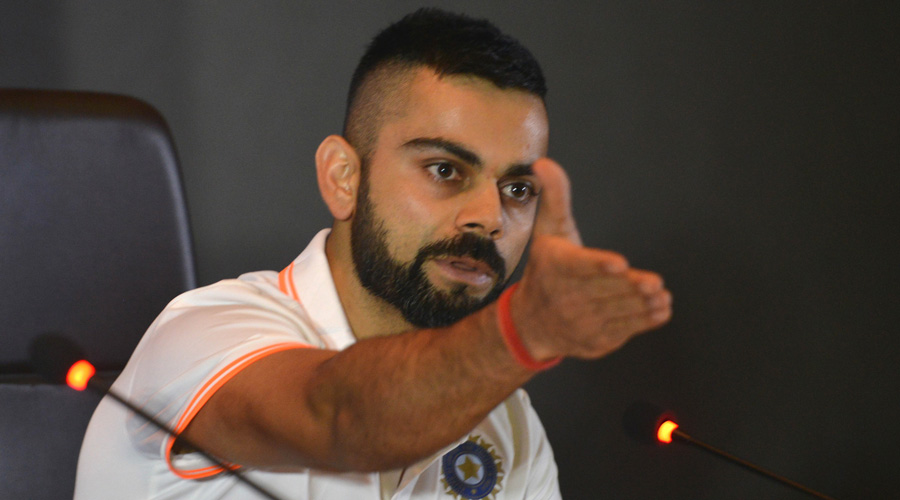 Virat Kohli is not too concerned about the limited preparation time the Indian team will get before the World Test Championship final against New Zealand.

The Indian skipper believes his team has the required understanding of conditions from past experiences of playing in England.

India take on New Zealand in the marquee game at Southampton from June 18. Currently, New Zealand are engaged in a two-Test series versus England, while India would be in quarantine after landing there, as well as three days of hotel quarantine.

“Look, in the past we have landed in places three days prior even in a proper schedule and have had a hell of a series and hell of competition, so it is all in the head,” Kohli said in the pre-departure press conference.

Kohli insisted it is also about the mindset. “It is not the first time we are playing in England, we all know what the conditions are like. And even if you are used to the conditions, if you don't enter the field in the right frame of mind, you are going to nick that first ball or you are going to find it tough to pick wickets,” he said.

“All of us take a lot of pride in playing Test cricket, and the way we have progressed as a side is an example of what Test cricket means to us. So, for all of us as a unit, those who have been part of the Test side for many years, this is like an accumulation of all the hard work,” he said.

‘Two India squads a norm for the future’

While the Kohli-led side leaves for the WTC final and a five-Test series against hosts England, a second string India squad will soon be picked for the limited-overs tour of Sri Lanka in July.

Two India squads travelling to different places at the same time could become a norm in the mentally draining world of bio-bubbles that cricketers are forced to live in amid the Covid-19 pandemic, Kohli said.

With a bio-secure environment taking its toll, Kohli said the players will be given breaks to recover from that and not just for workload management.

“With the current structure and the kind of structure that you're competing inside for a long period of time, it's very difficult for the players to stay motivated and find the right kind of mental space,” he said.

“You know just confined in one area and just doing the stuff, day in day out when you're dealing with high pressure situations. So, this (two squads) will definitely become a norm for the future,” he added.

The Indian team had to quarantine for 14-days in Mumbai and will do a soft quarantine in the UK on arrival. “Apart from the workloads, the mental health side of things will also come into the picture big time because you don't have an outlet at all,” said Kohli.

Elaborating on the challenges involved in sticking to the bio-bubble, he said, “In today's day and age you literally go into the ground, come back to the room, and you have no space where you can just disconnect from the game and just go out for a walk or go out for a meal or a coffee and say, Okay, Let me refresh myself. Let me just get away from the game a little bit so I think this is a huge factor which should not be neglected. Because as much hard work as we've done to create this team, you don't want players falling out because of the mental pressures and not having the capacity or the space to express themselves.”

Kohli endorsed players asking for breaks to address mental health issues. “So I think there has to always be a channel over which the management has left it for players to approach them and tell them, 'Look, I'm not feeling right in the head, and I just need a break and I just want to disconnect from the game'. So I think that's going to be a huge factor and I'm sure that the management understands that,” he said.

Sitting beside Kohli, head coach Ravi Shastri said the current schedules are punishing and the world of quarantines is making players' jobs tougher.

“You are not just talking about the World Championship. But if you want to add that as well, you have to play five Test matches in this environment in six weeks. It's no joke. I mean even the fittest will need a break. More than the physical part, it's the mental part, like he had (Virat) mentioned, you know you can be destroyed mentally.”

“Being asked to do the same things day in day out and then go and perform. And it’s not easy to recover if, especially if you've had a bad day. It’s important that you shuffle the guys around and keep them mentally fresh,” said the coach.

Like Kohli, Shastri too said that playing with two squads in different locations regularly is a possibility in the long run.

“Well you never know. At the moment it's happening because of the current situation and restriction in travel and things of that sort. But you never know. In the future if you want to expand the game, especially in the shorter of formats, then it could be the way to go. You know, why not, when you have that much volume of cricketers and if you want to spread the T20 game, across the globe, then that could be the way ahead because if you’re talking of Olympics in four years or eight years’ time, you need more countries to play the game. So that could be a way forward,” Shastri added.