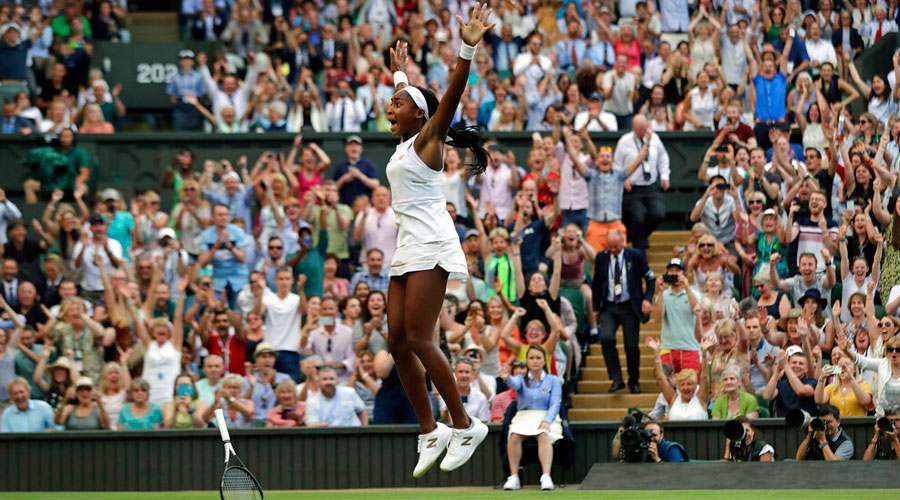 US' Cori Gauff celebrates after beating Slovenia's Polona Hercog in a women's singles in Wimbledon as spectators cheer
AP
Agencies   |   London   |   Published 03.07.20, 05:03 AM

Strawberries that would have been traditionally devoured by tennis fans during the Wimbledon fortnight are being sent to London’s National Health Service (NHS) and frontline staff as a mark of thanks for their efforts during the coronavirus pandemic.
Ordinarily the championships would have been in full flow this week, with defending champions Novak Djokovic and Simona Halep. But this year, the grasscourts remain vacant and the strawberry-and-cream stalls empty.
Instead, with Wimbledon cancelled for the first time since World War II, the All England Club is donating 200 punnets of strawberries per day ahead of the 72nd anniversary of the NHS.
More than 26,000 strawberries are being hulled and portioned by a group of staff at the south west London venue.
“Since the cancellation of the championships, we have focused on doing what we can to help those in our local community who are undergoing hardship as a result of the coronavirus crisis,” All England Lawn Tennis & Croquet Club’s chief executive Richard Lewis said.
“Our staff have been particularly keen to do what they can to help during this time and we were pleased that so many of them volunteered to take part in the strawberry hulling operation during the Wimbledon fortnight.”
Wimbledon has also been active in helping the local community during the pandemic, providing 200 hot meals per day to those in need.
Roughly 27,000 kg of strawberries and 7,000 litres of cream are usually eaten during the Wimbledon championships.
Amerjit Chohan, CEO of St George’s Hospital Charity, the recipient of the first strawberry delivery on Monday (June 29),  said: “St George’s Hospital Charity would very much like to thank the AELTC for their generous donation of the famous Wimbledon strawberries. It was a wonderful gesture and a great token of appreciation for our amazing NHS staff who have been working tirelessly during this crisis.”
Marion Regan of Hugh Lowe Farms said: “We are delighted that our strawberries will bring a taste of Wimbledon to NHS workers.”