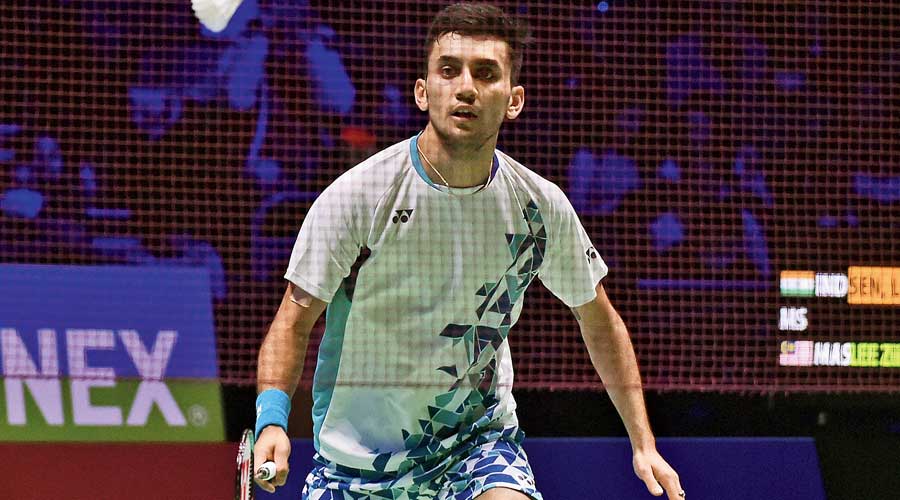 Lakshya Sen during his semi-final match against Malaysia’s Lee Zii Jia at the All England Open Badminton Championships in Birmingham on Saturday.
(AP/PTI)
The Telegraph   |   Published 20.03.22, 02:26 AM

The 20-year-old Sen became only the fourth men’s singles player after Prakash Nath, Prakash Padukone and Pullela Gopichand to reach the final of the prestigious tournament after outwitting the sixth-seeded Lee 21-13, 12-21, 21-19 in a gruelling semi-final match in Birmingham that lasted one hour and 16 minutes.

Sen, who had defeated Lee the last time they faced in an international tournament six years ago at the India International Series, showed great tactical acumen, athleticism and mental fortitude as he recovered from a mid-match slump to script history.

After contrasting tales of dominance in the first two games, the match saw a fierce fight in the deciding game with Sen managing a 3-1 lead early on. But Lee quickly unleashed a backhand cross court return to level the scores.

Lee seemed a step ahead with his pace and won a 67-shot rally next with Sen struggling at the back of his court. A 372km/hr backhand smash gave another point to the Maaysian, who led 7-5 at one stage.

A calm Sen drew parity at 8-8 with Lee going long. A body return gave the Indian another point but Lee managed to grab a two-point lead at the interval.

Playing with the drift, Sen marginally erred in his lifts which went long and Lee was quick to move to 14-10.

But a fighting Sen managed to narrow it down to 16-17 and then came up with a cross-court smash to soon grab two match points. Lee saved one before the Indian sealed it.

Sen admitted that he was a bit nervous but overcame it by keeping things simple.

“I am happy that I won the match and I get to play the final. I will take this time to recover and go all out on Sunday.”

Looking back at the tough match, world No. 11 Sen said: “I think in the first game, I got a good length, but I made a lot many errors in the second game.

“In the third game, I tried to play safe at the net rather than going too close and at the same time getting a good length,” Sen said.

Sen has been in sensational form in the last six months. He secured his maiden World Championships bronze in December, won his first Super 500 title at the India Open in January and finished runner-up at the German Open last week.