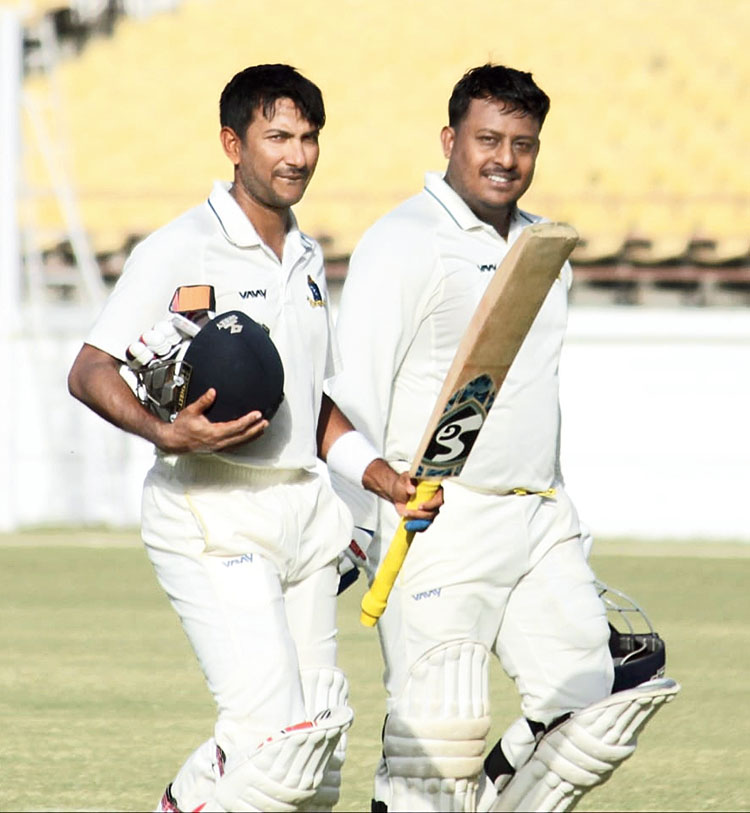 The battle of attrition gets more and more intense in the Ranji Trophy final.

It is still anybody’s game, but by the time the stumps were drawn on the fourth day at the Saurashtra Cricket Association Stadium, Bengal did gain some momentum against Saurashtra.

Anustup Majumdar (unbeaten on 58), in the form of his life, and all-rounder Arnab Nandi (batting on 28) played some fabulous cricket on a difficult pitch to enable Bengal end the penultimate day on 354/6.

So going into the final day, 72 runs separate Bengal from their third Ranji Trophy title as Saurashtra had scored 425 in their first innings. With not enough time left, the match is almost certain to be decided on who gets the first innings lead.

The situation looked almost hopeless when Shahbaz Ahmed was cleaned up with Bengal still 162 short of Saurashtra’s first innings total. But Anustup, as he has been doing since the quarter final this season, put on the saviour’s jacket once again and handled the pressure situation to perfection.

If Bengal go on to attain glory, they will perhaps have to be more grateful to Anustup than to anybody else.

Anustup did have a stroke of luck when he was dropped at slip off left-arm spinner Dharmendrasinh Jadeja late in the post-lunch session. He was on 10 then. But barring that, his knock, comprising eight magnificent boundaries, so far has been clean and courageous. Credit should be given to Nandi as well for his dogged resistance. That surely has added to Anustup’s confidence.

Nandi even got hit on the index finger of his right hand by a rising delivery from Jaydev Unadkat towards the end of the day’s play. But he didn’t look unsettled at all.

For Bengal, the job is still far from over and they know that. Soon after the end of the day’s play, the lower order, featuring Akash Deep, Mukesh Kumar and Ishan Porel, headed straight to the nets for a small session.The focus for Bengal, according to head coach Arun Lal, is on “playing to win hearts, not just the match.”

“Dil jeeto pehle… Of yourselves and the entire team. Think of the result later,” Lal said. “We’ll just fight and play every ball to its merit. We’ll play with guts, with gumption, with belief… That’s it.”

As for what he has told Anustup, Lal said: “Usko ko toh maine kahaa, ‘tere ko toh amar hona hai (I told him, ‘you have to be immortal) in cricketing history.’”

Resuming the day on 134/3, Bengal had a massive task ahead. Overnight batsmen Sudip Chatterjee (81) and Wriddhiman Saha (64) couldn’t get a run off the bat off the last 59 balls of Day III.

The Saurashtra bowlers were spot on as they kept bowling at the stumps, with the ball keeping very low at times. Perhaps the other quicks, barring Unadkat, needed a bit more pace to create further trouble for the Bengal batsmen.

That said, it still was a hell of a task for Sudip (81) and Saha (64). The latter, particularly, was fortunate enough to survive two leg-before shouts, thanks to the limited use of the DRS, a run-out opportunity and a dropped catch. But that didn’t ruffle Saha as whenever he got a scoring chance, he cashed in on it.

To talk of Sudip, it could well go down to be his career-saving knock irrespective of the final result. Defensively at his best, the left-hander played a chanceless knock. Just the kind required on such tough wickets.

The final day of the match will be held behind closed doors, the SCA announced on Thursday evening, as a precaution to the coronavirus outbreak.