As flags across all state buildings in the Bavarian capital flew at half-mast, Israel President and his German counterpart laid a wreath at the site 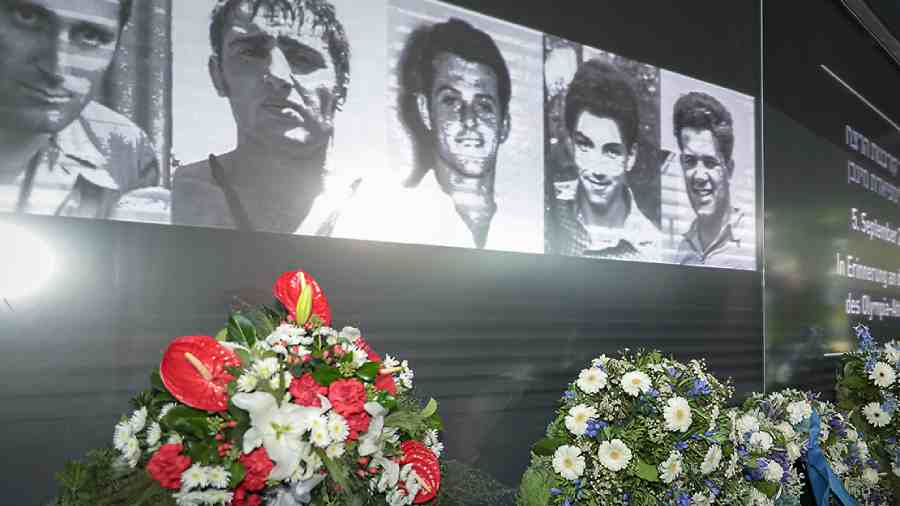 Wreaths are placed during the ceremony in Munich on Monday commemorating the 50th anniversary of the attack on the Israeli team
Getty Images
Reuters   |   Published 06.09.22, 03:12 AM

Germany on Monday marked the 50th anniversary of the 1972 Munich Olympics attacks on Israeli athletes and team members with a ceremony at the airfield near Munich where a failed rescue attempt took place.

As flags across all state buildings in the Bavarian capital flew at half-mast, Israeli President Isaac Herzog and his German counterpart Frank-Walter Steinmeier, laid a wreath at the site. The ceremony was attended by International Olympic Committee (IOC) chief Thomas Bach and other officials.

Members of the Israeli Olympic team were taken hostage on September 5, 1972, at the athletes’ village by Palestinians from the Black September group.

Eleven Israelis, a German policeman as well as five of the Palestinian gunmen died after a stand-off at the Olympic village and the nearby Fuerstenfeldbruck airfield, as rescue efforts erupted into gunfire. The Games continued despite the attacks and the IOC for almost half a century ignored calls from the victims’ families for an official act of remembrance at an Olympic Games ceremony.

The IOC eventually held a moment of silence and a reference to the Munich victims last year at the Tokyo Games opening ceremony — the first time in almost half a century. The ceremony to mark the attacks was welcomed by relatives of the victims and Israel’s government but Monday’s memorial had been put at risk by families threatening to boycott it over Germany’s compensation offer.

The German government and the Israeli families agreed on Friday on a compensation offer totalling 28 million euros.