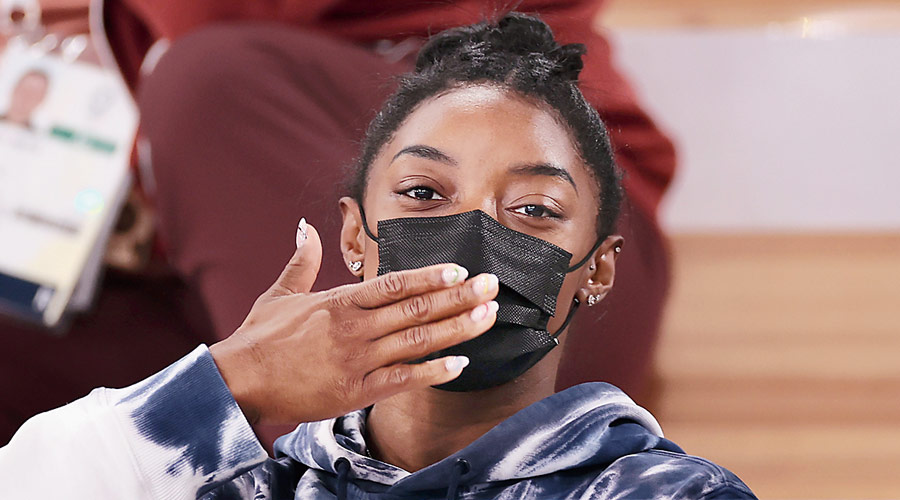 Biles had earlier stunned the Tokyo Games when she dropped out of the team competition following a poor opening vault
Getty Images
Agencies   |   Tokyo   |   Published 01.08.21, 02:01 AM

Simone Biles withdrew from the vault and uneven bar apparatus finals at the Olympics on Saturday as the US gymnast continued to wrestle with mental health issues.

Biles had earlier stunned the Tokyo Games when she dropped out of the team competition following a poor opening vault and then decided not to defend her all-around crown. The 24-year-old, however, might yet make another appearance at the Tokyo Games having not ruled herself out for floor exercise on Monday and beam on Tuesday.

“Today, after further consultation with medical staff, Simone Biles has decided to withdraw from the event finals for vault and the uneven bars,” USA Gymnastics said.

All over for Novak

Novak Djokovic will leave the Tokyo Olympics without a medal. The top-ranked Djokovic lost his cool and abused his racket several times during a 6-4, 6-7 (6), 6-3 loss to Pablo Carreño Busta of Spain in the men’s singles bronze-medal match on Saturday.

After the singles loss, he pulled out of Saturday’s mixed doubles bronze-medal match too, citing a shoulder injury.

Women singles gold was won by Belinda Bencic. The

Mixed day for US

On a morning of mixed emotions and chaotic racing at the Tokyo Aquatics Centre, Caeleb Dressel set a world record in the 100m butterfly to win his third gold. But his bid to win six gold medals fell apart with another US relay debacle. The Americans finished a poor fifth in 4x100m mixed relay. Britain set a world record to win the gold.

Katie Ledecky recorded a third straight victory in the 800m freestyle. Ledecky was pushed hard by Australian rival Ariarne Titmus, but the American held on in a race she hasn’t lost since 2010.

In men’s discus throw, Daniel Stahl and Simon Pettersson led a 1-2 Swedish finish. The Swedes draped flags over their shoulders and jogged on the grass down the backstretch during a celebration in front of a near-empty stadium.

Chinese weightlifter Lyu Xiaojun, 37, became the oldest man to win an Olympic gold medal in the sport. He lifted 170kg in the snatch and 204kg in the clean and jerk for a total 374kg.