Advertisement
Home / Science-tech / Be a dog, douse the fire

Be a dog, douse the fire 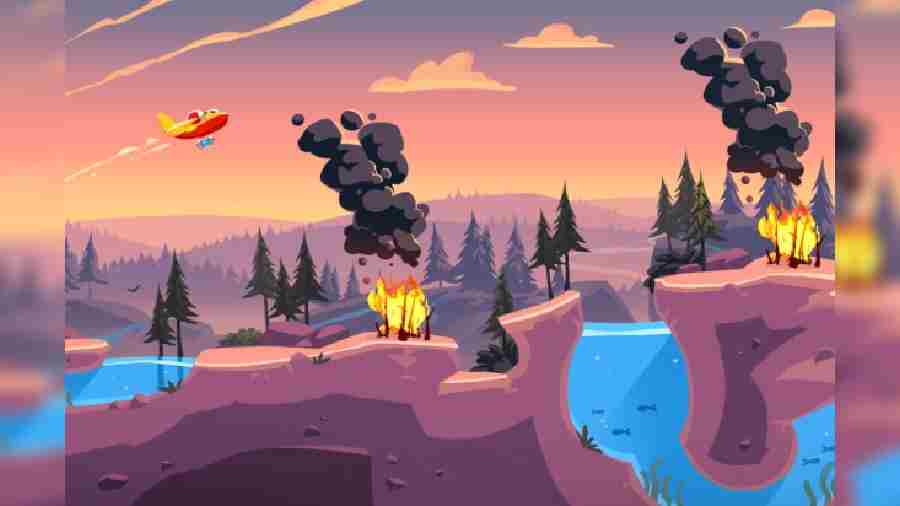 This week, we’re reviewing Rescue Wings, a game about a dog flying a plane and dousing forest fires. It’s a free-to-play game published by Playstack, who have also made Snipers vs Thieves.

Rescue Wings is a 2D sidescroller where you fly a plane through a burning forest while performing aerial acrobatics and, as stated above, dousing fires. You extinguish fires by dropping water bombs. To fill the water bombs, you have to fly the plane underwater and come out without hitting the bottom of the lake. Manoeuvring the plane through tight corners and dropping water bombs at the right time is what it is all about. There are 60 levels in all and along the way, you learn new ways of flying using the same controls. The upbeat music, clean graphics and delightful animations show that the game is well polished.

Being a landscape game, you have to hold the phone horizontally and use both your thumbs. There are four buttons to control the plane, and that makes the controls complex to learn. Learning to use all these buttons at the same time can take a while, and many casual players might give up due to repeated failure. For those who persevere, the game has much scope to use the skills learned in aerial stunts. New levels teach new aerobatics with the plane, like doing a backflip while throwing a water bomb to make it go backward.

Each level earns you coins, and you can purchase more planes with different properties. Some offer better manoeuvrability while others fill water bombs faster. Choosing the right plane does not matter as much in levels as in multiplayer mode. Here, you race against another player to the finish line, and the fastest player to douse all fires and finish the race wins. However, the multiplayer lacks depth, since you’re only playing against someone who has already finished the race earlier, and you’re just trying to beat their time.

You need fuel to play each level, and one of the worst parts is it’s so scarce that you have to wait for one hour after every 5-6 levels. Failing and repeating levels also use up fuel, meaning you can be stuck on a level for a while. This is not helped by the complex controls, which take time and multiple replays to learn, something that the limited energy doesn’t allow.

VERDICT: Rescue Wings is a fun and polished arcade game, in which manoeuvring the plane is not very easy to learn, and even harder to master. But if you like dexterity-based challenges, it is quite fun to learn and master this skill, as the levels are fulfilling when you’re able to perform the manoeuvres. Competing with other players is fun, but lacks depth as it’s only asynchronous multiplayer. But the bane of this game is limited fuel, which stops you from playing the game for more than 5-8 minutes. I would rate this game eight out of 10.