The Galaxy Tab S7+ is easily the friendliest Android tablet around

Millions of teachers, students and parents who are already using Android can easily switch over to the tablet without experiencing a learning curve 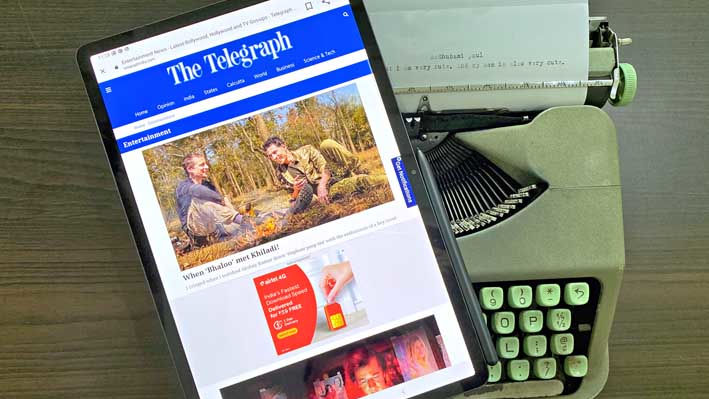 Samsung Galaxy Tab S7+ is the most powerful Android tablet at the moment and it comes with a free S Pen. It’s a versatile device that can handle all work-from-home needs.
The Telegraph
Mathures Paul   |     |   Published 15.09.20, 11:12 PM

It has been a reversal of fortune for tablets as the pandemic has forced people to work — and play — out of homes. Too bad that Google has not done too much in recent years to jump-start the device category for Android. Apple, obviously, remains a pillar in the tablet market, not only because it has amazing hardware to offer, the company has applied technical resources in abundance to iPadOS, making it a priority. The results have been stunning.

Market research firm Strategy Analytics says global tablet shipments increased by 17 per cent year-on-year in the second quarter of 2020 to reach 43.3 million units — its biggest growth in six years.
Much of the failure of Google with tablets stems from solving software problems. It creates apps for the phone but hardly any of them get redesigned for big screens. It’s time for a change. Not that software issues that Android has disappear on a Samsung tablet. No, Instagram continues to look weird. But the South Korean company has come up with hardware that’s finally comparable to the iPad; has powered it up with some great apps and tricks; and is giving a clear message — the tablet category of Samsung is only getting better.

Samsung’s Galaxy Tab S7+ is what can be termed cool tech. The millions of teachers, students and parents who are already using Android can easily switch over to the tablet without experiencing a learning curve. It can be the videoconference device one always wanted. It can be the e-book reader one can get hooked to. It can be the champion streaming screen one demands. It can be the device to help with education needs. Having to stay at home, this is probably the only device one would need.

Until the Galaxy Tab S7+ arrived, the story has been the same year after year — hardware tweaks. This is probably a turning point, not because Android has changed overnight, it’s Samsung which has made a few changes that puts the device on top of the heap. There are three clear winners for the Galaxy Tab S7+ — amazing screen, versatile pen, good selection of partner apps.

Many people have often wondered why Samsung didn’t offer something to match the larger iPad Pro. It’s here... on the beautifully put-together device with a frosted glass back, which is easy on the hands. Weighing just 575g, there is nothing unpleasant about the tablet. The bezels are slim but at the same time, thick enough to rest your thumbs without bothering the display, which is Super AMOLED. If watching a film on the iPad Pro is amazing, here it’s more of a cinema-like experience as the blacks come through really dark, offering a lot of contrast.

Adding to the viewing experience is the 120Hz refresh rate, which obviously is the minimum one should expect on a pricey tablet. A large screen such as this can be best enjoyed at this refresh rate. Don’t bother to take it down a few notches, even if it’s at the cost of battery because running out of charge on a tablet is not as big an issue as on a phone. Complementing the screen is a set of quad speakers, delivering crystal clear music.

A meaningful way in which the company has cut corners is by providing a 15W charger in the box but the 10,090mAh battery supports 45W fast-charging. Since it’s a large battery, spending on a faster charger makes sense.

We won’t bore you with the spec sheet as the innards of the tab are as robust as possible. What matters on a tablet is experience, an area that ranks high in the Apple universe. A redefining moment at WWDC 2019 was the introduction of iPadOS, which meant that the iPad got its own native operating system, which goes beyond just another term.

The Galaxy Tab S7+ has to make do with Android but there are some great tweaks to improve the experience and cutting down the difference between a mobile device and a computer.

You can open up to three tabs at once plus you can save your favourite combination of apps, which you can call up without having to undertake the entire process again. For example, I like the combination of Microsoft 365, Spotify and Canva on the screen. Working in different “windows” remains seamless even though Canva is a complex app. But there is a niggling problem, which is personal. I like my Word document to take up half the screen... more precisely the right half. That won’t be possible because when it’s a three-grid system, the app on the left half takes half the screen. So I need to switch to a two-grid option.

Improving the productivity quotient is the list of partner apps or ‘Galaxy Picks’ — Clip Studio, Noteshelf and Canva. Of course, one man’s “partner apps” can be termed by another as bloatware but there is something unique about the three. All of them make good use of the S Pen or the stylus. Canva is one of the best apps for making creatives for social media, Noteshelf is something anyone who takes down copious amounts of notes would understand. Clip Studio is an offering that stands out among artists. Palm rejection — which usually happens when one rests the palm on the screen, leaving behind stray lines — while using Clip Studio matches that on the iPad.

Yet, tablets remain consumption devices and be it an iPad or Galaxy tablet or Surface two-in-one, one wouldn’t like to edit a full movie on it, which technically you can. It’s an issue that won’t go away anytime soon.

Since we mentioned the S Pen and how it helps with the apps on the tablet, it’s important to note that the stylus is more versatile than before. Forget all the new Air Action tricks that have been added, which are gimmicky. The S Pen has a more rubbery tip, which stops it from sliding on the smooth screen. There is good pen pressure, ensuring lines are spot on.

Second, the S Pen comes free with the tablet, which is a saving. Apple as well as Microsoft make you spend more money on the stylus, which comes separately. Third, and this one is impressive, the S Pen can work without charging it on the back of the tablet. There is a long magnetic strip near the rear camera. Attach the pen and it easily charges. (The S Pen has to be attached in a certain direction for charging, something Samsung should work on in next editions.) But if you feel like not charging the stylus, just attach it to the side of the tablet. Neat trick.

Since you are saving money because you don’t have to buy the S Pen separately, invest in a clip-on keyboard, which can be bought separately (Rs 17,999 for Tab S7+ LTE). We had the opportunity to try the new Samsung keyboard which comes with a kickstand. The kickstand obviously allows the user to keep the tablet at an angle, but it is also helpful while drawing — fold it to an angle which will make the tablet appear a bit raised.

There are separate function keys and an escape button. The keys have good travel and clicks well. What would have been better is a backlit keyboard. The keyboard supports some shortcuts with which you can open Gmail, calendar, browser and so on. Using the Ctrl-spacebar shortcut, the language can easily be changed. The touchpad is of great quality and precise, it supports touch gestures. How does it compare with Apple’s Magic Keyboard? We will compare it in future articles.

Cameras? Nobody buys a tablet for a good set of shooters (FYI: the cameras are spot on!) but here’s a tiny change that Samsung did which shows that little goes a long way. Instead of the front camera being on top, it has been moved to the centre of the long right bezel. One holds a tablet in horizontal mode while chatting, which means staring sideways, even on the new iPad Pro. Here, you can look straight at the tablet and voila!

These are meaningful changes… changes that make one feel that Android tablets are not light years away from an iPad. The Samsung Galaxy Tab S7+ is easily the friendliest Android tablet around.

Head to head, Samsung Galaxy Tab S7+ and the Apple iPad Pro have equally big-hitting features but at the same time each has a different ecosystem. But there are small things on the Samsung tablet that wow us.