The Jeep Compass has returned with not only two new BS6 engines, but also a plusher interior 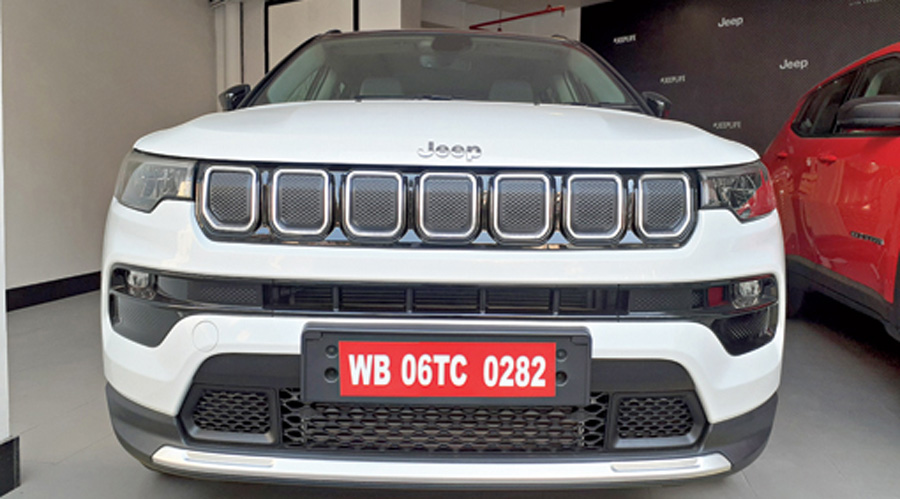 The front end is where more of the visual changes have been made, from the grille to the lights.
Sourced by the correspondent
Abhijit Mitra   |   Published 04.04.21, 12:53 AM

When Jeep launched the Compass in India about four years ago, it was, in a sense, a bit of an outlier. While it was comparable with most other vehicles in that segment, in terms of off-road capability it had the good old-fashioned Jeep chops and was head and shoulders above pretty much anything else in that segment.

Four years on, competition has grown tougher and is offering way more than they used to. Plus, at the higher end of the Compass’s price range are a bunch of very well-appointed vehicles. So the Compass has upped its game as well. Also, with the switchover to BS6 emission norms, it now has new engines. While there are both petrol and diesel models, we got to drive only the diesel, both in 4x2 and 4x4 configurations. Here are our impressions.

The exteriors
The Compass always had a nice square stance and not much has changed there. The body shell remains unchanged. The changes are essentially up front. The signature seven-slat Jeep grille doesn’t have air intakes now. In fact it has been blocked out and the actual intake has shifted lower into the bumper in the section below the grille as well as further down.

The Compass always had a nice square stance and not much has changed there.
Sourced by the correspondent

In the vehicle we drove there were chrome highlights up front, although other versions are offering more muted grey. The fog lamps are now in deep recesses in the bumper and the bumper redesign makes it look heavier than before.

The headlamp clusters (incorporating LED lights) are new too and so are the tail lamps. Along the flanks the only obvious changes are the alloy wheels of the new five-spoke design. Dual-tone paint jobs are available for most colours. Three new colours, including a Techno Metallic Green that is quite eye-catching, have been added.

This is where the biggest changes are. The old dashboard has been thrown out and replaced with a far more upmarket one. Just that takes the premium feel of the vehicle up a couple of notches compared with the earlier model.

The two-tone cabin with the light upholstery is airy, but can get hot with the large sunroof open.
Sourced by the correspondent

There was leather wrapping in the Limited version we drove and it also had a tan leather insert that made the whole thing look quite smart. There are chrome strips here going right across the width of the vehicle.

Topping off the new dash is a new 10.1-inch touchscreen that is excellent — bright, sharp and responsive. The instrument cluster, too, is a nice one with very readable white-on-black gauges. The top end has a LED screen for this as well. The S version also gets ventilated seats for both the driver and front passenger.

The black-and-tan colour scheme of the dash of the Limited model along with the lighter upholstery look good, and less heavy than the all-black options. The infotainment touchscreen is now a 10.1-inch affair.
Sourced by the correspondent

In true Jeep style, the rear seats offer very good support, especially under the thighs, which should be good for longer trips. Space too is quite generous, both legroom and headroom. The new panoramic sunroof makes the cabin feel airy, but unless closed off, can make things pretty hot when the temperature outside is on the rise at this time of the year.

The 4x4 AT also gets hill descent control, hill hold, 4WD Low and 4WD Lock options. The drive selector now combines the Sand and Mud modes into one. The selector dial has also been replaced by a toggle switch. With this interior, the Compass can hold its ground at the higher end of its price range as well.

The engine and transmission

We drove the 2-litre diesel version in 4x2 configuration with a six-speed manual and one in a 4x4 configuration with a 9-speed automatic. The 170ps diesel behaved the way it was expected to and as long as the revs were held in the 2,000rpm range or higher, it worked just fine, delivering power pretty linearly.

The vehicle did not seem particularly heavy, so one really did not need to thrash the engine at any speed since enough torque was available throughout the range. That said, the diesel does sound like it is protesting at higher rev ranges.

Working the gear shift in the manual (the knob seems to have been carried over and we liked it in the first place anyway) too often in stop-go traffic can seem like a bit of a chore at times, so it is probably better to go for the automatic transmission if buying the diesel version anyway.

The downshifts can at times seem to be a little leisurely though in the AT, but we didn’t have much trouble negotiating city traffic. And with the engine start-stop it is pretty much a tension-free experience driving with auto transmission.

The one area where there have been no doubts of the Compass’s capabilities is in the ride-and-handling department. It is incredibly good at evening out bad roads and even off-road stretches.

Some of the undulations do seep into the cabin but one doesn’t feel even half of what one sees on the ground. And the higher the speed the better it gets. Because of a certain stiffness in the suspension set up, cornering is also very poised even when the speedo needle is spooling up.

This is one vehicle that inspires a lot of confidence in the driver, whether you are driving the automatic or the manual since it tracks nice and true. We did not get the opportunity to do full-blown off-roading in the 4x4, but if it is even as good as the earlier version, there shouldn’t be a problem in most situations.

The Jeep Compass was always a capable vehicle that had the stance that one expects of an SUV and also the pedigree to match. Where, over the years, it did tend to fall a little short was the quality of the interiors, primarily because competition had upped its game significantly.

That shortcoming, if one can call it that, has now been fixed. So the Compass is very much back in the reckoning, particularly the diesel automatic version.

The Compass in numbers