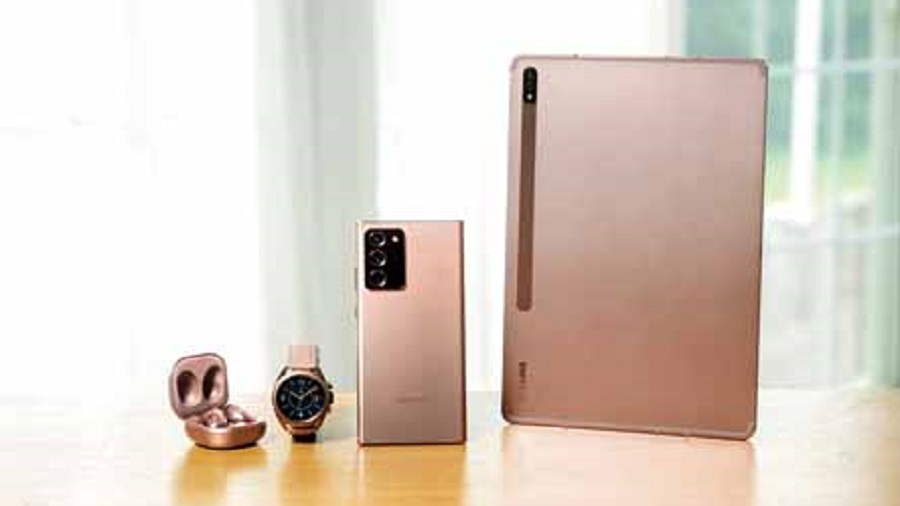 Launching a set of premium devices during the ongoing pandemic is not easy. The only way a brand can pull it off is by adding enough productivity features that would hold the user in good stead for a few years. Samsung has done just that with the launch of the new Galaxy Note20 and Note20 Ultra, besides two new Galaxy Tabs, Galaxy Watch3, Galaxy Buds Live and… hang on… Galaxy Z Fold2. What the South Korean company has done is fix all the chinks and pack in meaningful innovations.

With Note20, Samsung hasn’t played around with the shape, which could have easily taken the form of rounded corners. It still resembles a piece of paper, which does justice to the device’s USP — the S Pen. At the same time, Samsung has rethought the shape of the camera module on the back. On the Galaxy S20 Ultra, it is a biggish block but on the Note things are snazzy; the rear shooters seem to have purpose. Equally interesting is the use of the new version of Gorilla Glass (on the Ultra) that’s supposedly more resistant to drops and scratches.

Number-to-number comparisons are not useful all the time. A case in point is the camera setup on the Note20 Ultra and Galaxy S20 Ultra. The S20 Ultra has a great camera spec sheet but that doesn’t mean it works for everyone. There have been occasions the camera on the S20 Ultra has been slow to focus and the big selling feature is the 100x “space zoom”, which, honestly, is something one would use once in a few months. Samsung has balanced things out this time. So zoom is capped at 50x. The selfie camera has been brought down from 40MP on the S20 Ultra to 10MP on the Note20 Ultra but the crispness is still very much there. Why this move? First, Note is about productivity and “space zoom” is more of a fit on the lifestyle front. Second, the company has fixed what’s necessary. There is something called Laser AF on the new Note Ultra, which basically allows quick auto focus and we mean far quicker than on the S20 Ultra.

The other big improvement one can look forward to is better battery management. The Note20 Ultra comes with a 4,500mAh battery compared to the 5,000mAh on the S20 Ultra. Don’t be worried. There is something called adaptive refresh rate of up to 120Hz, which means if you are doing an activity that doesn’t require a high refresh rate, the screen can adjust.

A more important change is in the S Pen department. Obviously people buy this phone for the pen. Now the S Pen boasts lower latency — 9ms versus 42ms, which would make you feel that you are actually writing on paper; it’s more precise. Also, the S Pen can now straighten handwriting in Notes.

Soon, Notes from Samsung Notes app will be able to sync with the OneNote app and with your OneNote feed in Outlook on the web.

Samsung Reminders will be able to sync across Outlook, Microsoft Teams and Microsoft To Do.

Samsung has managed to make their foldable phone appear far more approachable. There were complaints about the early generation of the Fold but the new Galaxy Z Fold2 is much more refined and practical. When you snap shut the new foldable device, the outside display is much bigger than before and it looks cooler. It’s 6.2 inches while the main screen stretches to 7.6 inches. The weird notched corner has been replaced by a hole-punch camera that takes up far less space on the folding OLED screen. And it now runs at up to a 120Hz refresh rate. According to the company, the hinge mechanism is now sturdier.