If this mission lands safely in February 2021, it will answer the most difficult queries of all time: Was there ever life on Mars? Will it be suitable for future colonisation? Apart from Earth, could there be life anywhere else in the universe? 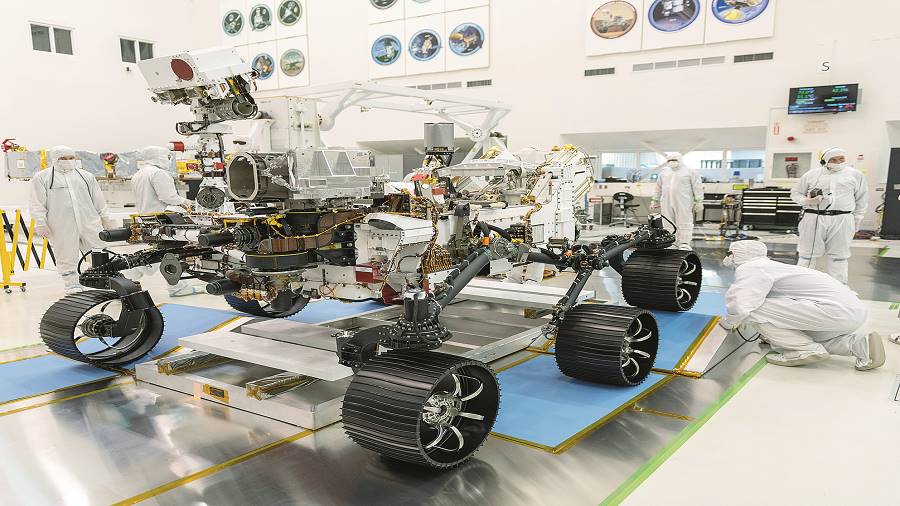 Nasa engineers work with Perseverance during its first driving test at the Jet Propulsion Library in Pasadena, California, US, in December 2019
J. Krohn/Nasa via The New York Times
The Telegraph   |     |   Published 02.08.20, 04:34 PM

Nasa has added a very colourful feather to its cap by putting Mars 2020 into orbit. If this mission lands safely in February 2021, it will answer the most difficult queries of all time: Was there ever life on Mars? Will it be suitable for future colonisation? Apart from Earth, could there be life anywhere else in the universe?

The mission has a list of firsts to its credit. The rover Perseverance, piggybacking on a helicopter named Ingenuity, will land on a riverine delta located in the crater Jezero. The landing will be autonomous, at a flat spot adjudged to be the best after in-situ comparison of 20-odd camera images with pre-loaded images on board. It will drill holes (and listen to the sound with a microphone), dig out pencil-shaped rocks, cache them in capsules and store them in a suitable area to be picked up and brought back to Earth by one of the next missions.

The mission has taken back a Mars rock that fell to Earth about 6,50,000 years ago for help in calibrating its spectrometers. It carries prototype machines that will extract oxygen from carbon dioxide in preparation for future colonisation and rocket propellant for return trips. The area will be surveyed by a helicopter with twin blades that rotate at 2,400rpm —which is 10 times the spin rate of a terrestrial chopper — to stay afloat in the tenuous Martian atmosphere.

It is no mystery why the possible biological activities of Mars are being investigated; many of its parameters are similar to those of Earth. Since it is roughly half the size of Earth, its gravitational pull is about 40 per cent that of Earth — a number we could be comfortable with. The inclination of the planet is only slightly higher (25° as opposed to Earth’s 23°) so there are similar seasons. Well, almost. There used to be rains and water flows and lakes about 3.7 billion years ago. Currently, there is not enough water vapour in the Martian atmosphere for a rainy season. The water vapour is directly absorbed and desorbed by the Martian soil. Atmospheric pressure is about 0.1 per cent compared to Earth and the atmosphere is composed mostly of carbon dioxide with a pinch of oxygen, water vapour and argon. This carbon dioxide and possible subsurface water must be tapped for much-needed oxygen for human survival.

The well-chosen landing site of Mars 2020 is within the 50-km Jezero crater, which was formed by hundreds of kilometers long, sediment-carrying rivers flowing into it. There is an intricate network of deltas formed for at least 10 million years. Water-rock combination produced mineral rich clay in the crater bed, which is widely thought to be the ideal catalyst to form microbial lives from pre-biotic molecules that arrived during the formation of the solar system 4.6 billion years ago. The same molecules gave rise to microbial life on earth, which evolved into higher forms of life, thanks to its atmosphere. The weak gravity on Mars led to the loss of its primitive atmosphere and therefore any chance of complex live forms ended prematurely.

Instruments onboard Perseverance and Ingenuity will scrutinise the surface, weather and atmosphere for at least one Martian year — equivalent to 686 Earth days — to obtain signs of past and present life forms as well as suitability for future colonisation. The instruments are designed to work much longer. Curiosity, the rover that landed on Mars in August 2012, is still inching towards the peak of the Sharp Mountain and collecting valuable information on geology and minerology from all accessible strata. Based on the same platform, the improvised and strengthened Perseverance should be extremely successful in enhancing our knowledge of extra-terrestrial life.

If we do find that Mars was habitable in the past and could possibly be terraformed in future for us to live there, should we be delighted?

Perhaps not. A barren land without greenery and the melody of early-morning bird calls would not be my cup of tea. But at least we would be assured that living beings are generic. That’s a great relief. Meanwhile, I wish to stay put on Earth hoping that it remains habitable forever and there is never a compulsion to leave it for an alien planet. 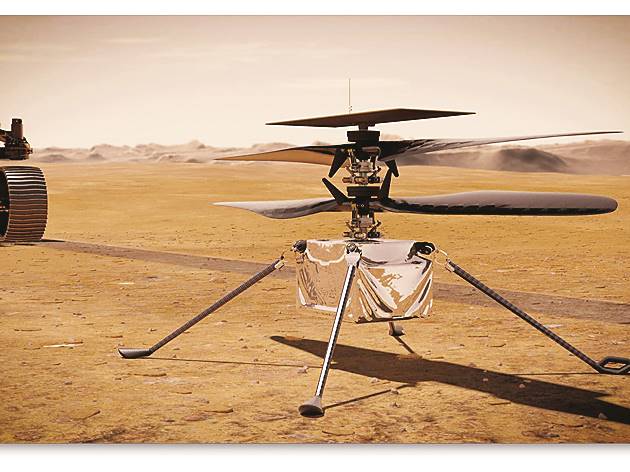 Perseverance is carrying an experimental helicopter called Ingenuity. The four-pound Marscopter is a technology experiment, and if it works, it will be the first powered flight on another planet. The rotors have to spin at 2,400 revolutions a minute to generate lift in the thin atmosphere of Mars, that is just 1 per cent as dense as Earth’s.

Bob Balaram, the chief engineer for the helicopter, started working with some colleagues on the idea back in the 1990s. Balaram, an IIT Madras alumnus, believes if the chopper succeeds on Mars, it will be kind of a “Wright Brothers moment on another planet”.