Advertisement
Home / Science-tech / May the C-RAM be with you

May the C-RAM be with you 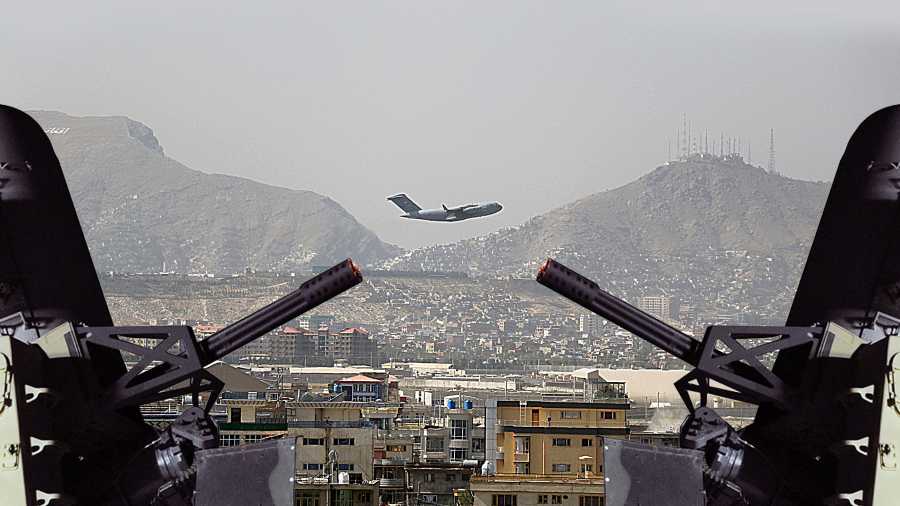 The airspace above Hamid Karzai International Airport in Kabul looked like something from a Star Wars movie on the morning of August 26, as a sophisticated US robot shot down at least three rockets. Five rockets were apparently fired by the terror group ISIS-K; they were aimed at the last American fighter planes preparing to leave Afghanistan. Eyewitnesses in the Kabul neighbourhood of Khair Khana later told media that they heard “a few loud bangs” and found some parked cars “catching fire” in the explosions. One of the rockets hit a nearby building and the impact of another was visible on a high-rise building.

In time, it emerged that the US robot is actually the Counter-Rocket, Artillery and Mortar (C-RAM).

C-RAM is a missile defence system used to detect and destroy incoming rockets, artillery and mortar rounds in the air before they hit the ground. It shoots down close-range rockets with a powerful machine gun that can fire up to 4,500 rounds per minute countering anything from missiles to rockets to artillery shells.

Following the attack, Pentagon spokesman John Kirby said during a press briefing that “the C-RAM ‘successfully’ took out one of the five rockets launched at the airport Monday — as three others did not make it to the airfield”. The US later admitted that one of the rockets did manage to enter the airport.

Major General William D. “Hank” Taylor of the US Army told reporters, “We assessed five rockets were in the air and went… Three landed off the airfield... were of no

effect… C-RAM was able to affect and thwart the attack. The one or the other rocket landed with no effect to the mission or any danger to our personnel.”

C-RAM was developed by US weapon manufacturers to help the US army counter frequent missile, mortar and drone attacks by insurgents and militias in Iraq and Afghanistan. It is an improvised version of the US Navy’s Phalanx Close-In Weapon System (CIWS), pronounced “sea whiz” and sometimes called R2-D2 by US Marines, because of its resemblance to the eponymous droid from the Star Wars  films.

The Phalanx CIWS was developed in the late 1960s as a last-line defence against incoming anti-ship missiles. The latest CIWS employs dual antennas to track targets. The primary radar continually scans for incoming threats, and its computers measure a target’s speed and trajectory. Once that system confirms the incoming threat, the secondary targeting system kicks in. When the Phalanx senses the threat is within the “kill” range, it spews a stream of bullets to detonate the rocket before it reaches the ship. The entire unit is self-contained and can operate on its own — locating, tracking and engaging fast-moving targets.

C-RAM functions in much the same way.

The US-made Centurion C-RAM uses the 20mm 2,000 RPM auto cannon. However, it employs additional sensors, different ammunition and is mounted on a semi-truck with an attached generator because C-RAM has more threats to defend against than its sea-faring twin, the Phalanx. It has to counter mortars and often operate in areas surrounded by civilian population.

On land, they are more likely to cause collateral damage. Therefore, C-RAM uses additional tracking sensors, including the US Army’s Lightweight Counter Mortar Radar and Q-36 Target Acquisition Radar. These can target, track, prioritise and eliminate multiple incoming rounds before they hit the ground. They also include a warning system for nearby troops. To cut down collateral damage, instead of the full-tungsten anti-armour rounds the Navy uses, the C-RAM’s rounds self-destruct before they hit the ground. The Centurion can reportedly defend a 1.2km square area from airborne threats with a 60 to 70 per cent shoot-down rate.

Israel’s Iron Dome missile defence system is equally efficient, if not more. Since its development, it has neutralised about 90 per cent of the thousands of rudimentary rockets fired towards Israel by Hamas and other Palestinian groups. The Iron Dome is sophisticated enough to differentiate between missiles likely to hit built-up areas and those that won’t.

The country has now deployed 10 such systems and Israeli military claims that “the number of Israelis killed and wounded would be far higher if it had not been for the Iron Dome system”. Some defence analysts say that recent attacks from Gaza suggest militant groups are attempting strategies to find holes in the Israeli system.

Meanwhile, the Germans have developed Mantis and Skyshield on the lines of C-RAM. The Italians have developed Porcupine and the Chinese the Spaagm system to protect their skies from missile and rocket attacks.

Analysts, however, say that such an individual unit of a sky defence system has limitations. A unit can protect a maximum of three square kilometres of air space from missile or rocket attacks. To be effective, multiple systems must be installed.

In the meantime, one has to wait for a super duper all-powerful defence system as seen in Star Wars films, protecting the rebel alliance from lethal attacks of the villainous galactic empires.