How a tiny asteroid may save earthlings 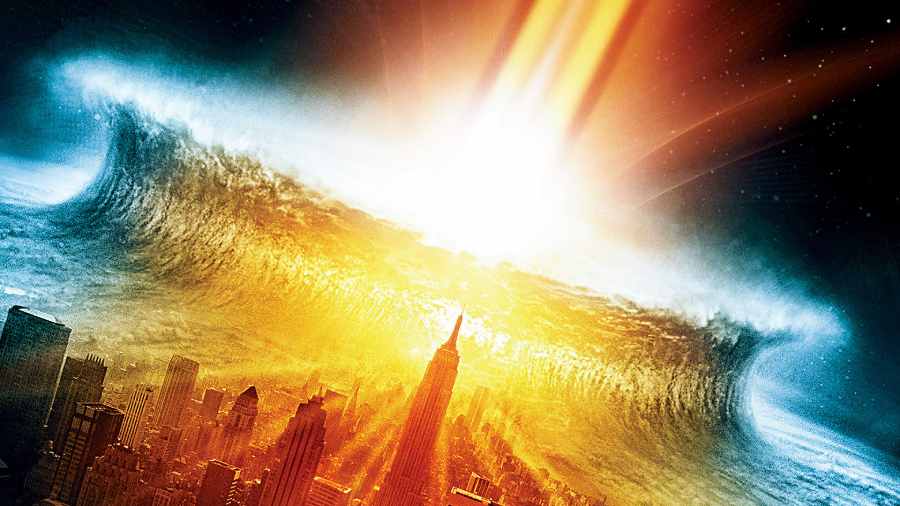 A scene from Deep Impact, a 1998 sc-fi disaster film that depicts attempts to destroy a seven-mile comet on its way to collide with Earth
NYTNS
Robin George Andrews   |   Published 11.04.22, 12:02 AM

Movies that imagine an asteroid or comet catastrophically colliding with Earth always feature a key scene: a solitary astronomer spots the errant space chunk hurtling toward us, prompting panic and a growing feeling of existential dread as the researcher tells the wider world.

On March 11, life began to imitate art. That evening, at the Konkoly Observatory’s Piszkésteto Mountain Station near Budapest, Hungary, Krisztián Sárneczky was looking at the stars. Unsatisfied with discovering 63 near-Earth asteroids throughout his career, he was on a quest to find his 64th — and he succeeded.

That may sound like the beginning of a melodramatic disaster movie, but the asteroid was just over six feet long, an unthreatening pipsqueak. And Sárneczky felt elated.

“I have dreamed of such a discovery many times, but it seemed impossible,” he said.

Not only had he spied a new asteroid, he had detected one just before it struck planet Earth — only the fifth time such a discovery has ever been made. The object, later named 2022 EB5, may have been harmless, but it ended up being a good test of tools Nasa has built to defend our planet and its inhabitants from a collision with a more menacing rock from space.

One such system, Scout, is software that uses astronomers’ observations of near-Earth objects and works out approximately where and when their impacts may occur. Within the hour of detecting 2022 EB5, Sárneczky shared his data and it was speedily analysed by Scout. Even though 2022 EB5 was going to hit Earth just two hours after its discovery, the software managed to calculate that it would enter the atmosphere off the east coast of Greenland. And at 5:23pm. Eastern time on March 11, it did just that, exploding in midair.

although EB5 was meager, it doesn’t take a huge jump in size for an asteroid to become a threat. The 55-foot rock that exploded above the Russian city of Chelyabinsk in 2013, for example, unleashed a blast equivalent to 470 kilotons of TNT, smashing thousands of windows and injuring 1,200 people. That Scout can precisely plot the trajectory of a tinier asteroid offers a form of reassurance. If spotted in sufficient time, a city faced with a future Chelyabinsk-like space rock can at least be warned.

It normally takes a few days of observations to confirm the existence and identity of a new asteroid. But if that object turns out to be a small-but-dangerous space rock that was about to hit Earth, deciding to wait on that extra data first could have disastrous results. “That’s why we developed Scout,” said Davide Farnocchia, a navigation engineer at the Jet Propulsion Laboratory who developed the programme, which went live in 2017.

Scout constantly looks at data posted by the Minor Planet Center, a clearinghouse in Cambridge, Massachusetts, US, that notes the discoveries and positions of small space objects. Then the software “tries to figure out if something is headed for Earth,” Farnocchia said.

That Sárneczky was the first to spot 2022 EB5 came down to both skill and luck.

Using 14 observations taken in 40 minutes by a sole astronomer, Scout correctly predicted the time and place of 2022 EB5’s encounter with Earth’s atmosphere.

This isn’t Scout’s first successful prediction. In 2018, another diminutive Earth-bound asteroid was discovered 8.5 hours before impact. Scout correctly pinpointed its trajectory, which proved instrumental to meteorite hunters who found two dozen remaining fragments at the lion-filled Central Kalahari Game Reserve in Botswana. That won’t be possible for 2022 EB5.

“Unfortunately, it landed in the sea north of Iceland, so we won’t be able to recover the meteorites,” said Paul Chodas, the director of the Center for Near Earth Object Studies at Nasa’s Jet Propulsion Laboratory.

that Scout continues to demonstrate its worth is welcome. However, it will be of little comfort if this programme, or Nasa’s other near-Earth object monitoring systems, identifies a much larger asteroid heading our way, because Earth presently lacks ways to protect itself.

A global effort is underway to change that. Scientists are studying how nuclear weapons could divert or annihilate threatening space rocks. And later this year, the Double Asteroid Redirection Test, a Nasa space mission, will slam into an asteroid in an attempt to change its orbit around the sun — a dry run for the day when we need to knock an asteroid out of Earth’s way for real.

But such efforts will mean nothing if we remain unaware of the locations of potentially hazardous asteroids. And in this respect, there are still far too many known unknowns.

Although scientists suspect that most near-Earth asteroids big enough to cause worldwide devastation have been identified, a handful may still be hiding behind the sun.

More concerning are near-Earth asteroids about 460 feet across, which number in the tens of thousands. They can create city-flattening blasts “larger than any nuclear test that’s ever been conducted,” said Megan Bruck Syal, a planetary defence researcher at the Lawrence Livermore National Laboratory. And astronomers estimate that they have currently found about half of them.