Do we really need foldable phones?

To make gadgets bend, you have to sacrifice some hardness 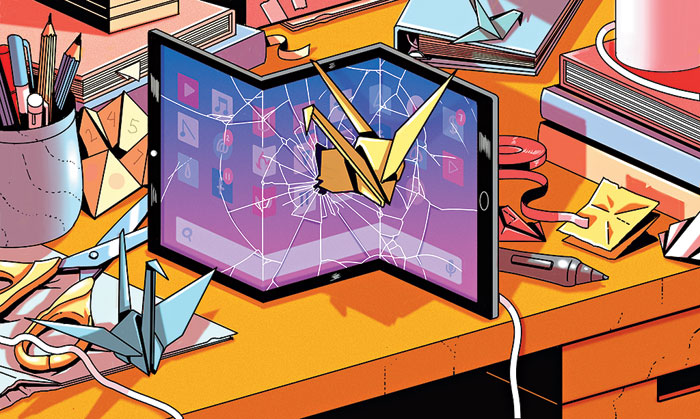 The consensus among consumer technology experts is that you and I should wait for the devices to mature before even considering buying one
Souced by The Telegraph
Brian X. Chen/NYTNS   |   Published 16.02.20, 11:25 AM

Your next smartphone may flip open to reveal its screen and fold up when you are ready to put it away — just like the old-school clamshell phones from the 1990s. The question is: Do we even want something like that anymore?

Tech companies such as Samsung, Motorola and Huawei hope so. Many of us realised a few years ago that the smartphones we had were already very good — and their successors were only slightly better — so we have been holding on to our phones longer before upgrading. That hurts the bottom lines of phone companies. In an effort to come up with something exciting that will make us spend money, phone-makers are bombarding us with so-called foldables. They include Samsung’s Galaxy Z Flip and Lenovo’s Motorola Razr.

For years, tech companies experimented with new phone designs driven partly by consumer surveys, which brought us handsets with bigger screens, longer battery life and sharper cameras — things we really wanted. But folding phones are not something most of us have asked for. And the few foldables unveiled so far have had major problems. Samsung’s first foldable phone, the Galaxy Fold, released last year, broke within days of use by tech reviewers. According to early reviews, the new Motorola Razr suffers from poor battery life and a fussy hinge. “It’s a solution looking for a problem,” said Paolo Pescatore, a technology analyst for PP Foresight. So are foldables a passing fad or here to stay?

Folding screen technology is certainly fascinating and worth keeping an eye on. But the consensus among consumer technology experts is that you and I should wait for the devices to mature before even considering buying one.

Some devices, such as the Galaxy Fold and Huawei’s Mate X, have two screens. When you unfold them, you get a tablet with a roomy screen. Once it’s shut, you have a second outer touch screen to type away at.

Other devices, such as Samsung’s Z Flip and Lenovo’s Motorola Razr, open to reveal a standard-size touch screen. When the phone is folded up, a miniature screen in the outer shell shows notifications or app previews.

Larger bendable devices are also coming, such as Lenovo’s ThinkPad X1 Fold, which has a bigger bendable screen so it can function as a tablet computer that folds up like a book. All of these gadgets rely on a hinge, which introduces a moving part to a smartphone. It’s another component, other than the screen, that could break.

The main benefit of a foldable phone is that you can enjoy a big screen that takes up less space in your pocket. Um, that’s about it.

And the many cons

Foldables come with many downsides. They rely on flexible OLED, a display technology that is much thinner than traditional screen panels. Gadget-makers have used flexible OLED for years to make our phones and smartwatches slimmer.

To make gadgets bend, you have to sacrifice some hardness. The flexible displays of foldables are generally covered by a plastic layer, which can be scratched up or penetrated more easily than the tough glass protecting traditional phone displays. (Samsung said its Z Flip uses an ultrathin, foldable glass that would let you fold and unfold your phone 2,00,000 times.)

“If you take a ballpoint pen and push really hard on the iPhone screen, it’ll be fine,” said Kyle Wiens, chief executive of iFixit, a company that provides instructions and parts to repair gadgets. “If you do the same thing on the foldable displays, you’ll kill it.”

In theory, the clamshell designs of the Z Flip and the Razr offer a partial solution to the durability problem. That’s because the main screens are not exposed when folded up. Yet if you drop the phones while using them — say, you are walking and texting and trip over something — you will have a problem.

Foldables also have a design flaw. In general, when unfolded, the screen has a visible crease — an eyesore compared with the seamless displays on our smartphones and tablets. Last but not least, it remains to be seen whether the mechanical hinges of folding phones will survive the test of time.