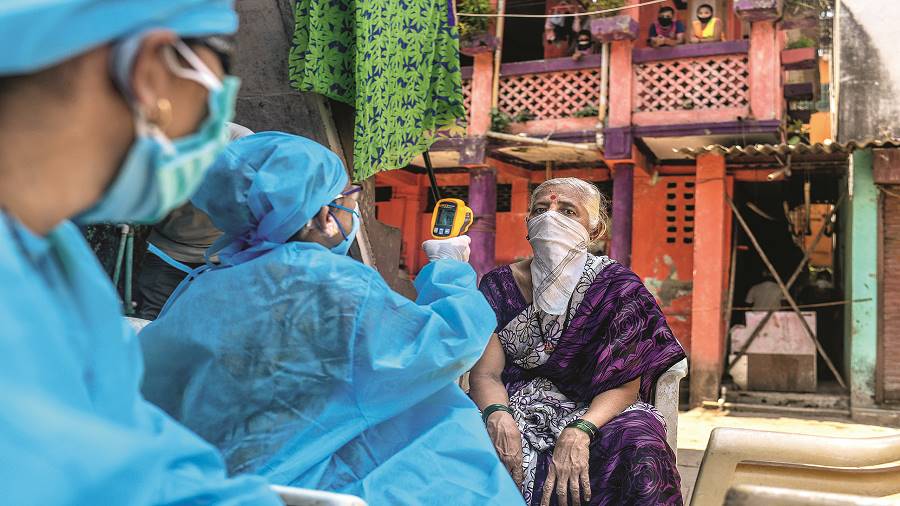 The much-apprehended second wave of the Sars-Cov2 pandemic is here. But what is more disturbing is the timing of the emergence of a more infective form of this virus. Even if we console ourselves with the belief that we are still ranked second on the chart of infected countries, we need to note that our current testing rate (53,636 per million) is still six times lower than that of the US (3,20,550 per million). With this difference in testing rate, if the US currently has only 11.7 lakh cases (74,10,000) more than us (62,40,000), it shouldn’t require rocket science to figure out which is actually the most infected country in the world right now — we are.

A bigger concern is how we are denying this fact and the impending threat of a much larger crisis through complacency, unrestricted socialisation and preparation for festivity at a very wrong time.

Although several labs in Europe and the US sequenced the genome of the Sars-Cov2 virus during different stages of this pandemic to understand its behaviour, such data were unfortunately not sufficient or causally co-relatable to available clinical data. This hindered pre-assessment of the behavioural traits of the virus, particularly to prepare for a predicted “second wave”.

It was only after two well-defined studies from the UK and the US —which correlated the viral genome sequences to the clinical data of a sizeable number of patients —that the world got to assess the precise genetic and behavioural changes the virus has undergone to initiate this new wave of infection. Both studies were conducted amidst the peak of a second wave in the UK and Houston, US.

The studies detected signature mutations in the spike proteins, which the virus uses to hook onto human cells and enter the body.

Prominent among these was the change of an aspartic acid (D) amino acid residue in the 614 position to glycine (G). The independent studies found that patients infected by a virus strain having the D614G mutation in their spike protein could induce massive viral loads and be highly infective. Out of the 12,000 plus mutations detected in the Sars-Cov2 so far, this mutation is being consistently observed wherever there is an emerging second wave. However, the mutated strains were not found to be more virulent or cause increased mortality.

All RNA viruses, of which Sars-Cov2 is an example, are known to change their biological character through extensive mutations. However, it is very difficult to predict whether the virus would transform into a less dangerous or a more virulent form. Theories of natural selection say that the virus usually orchestrates such mutations to help it survive and grow or proliferate better in its host. It is against the evolutionary interest of the virus to become more virulent and increase the threat to the life of its host — its prized abode.

That the newly emerging strains of the virus that are defining the second wave are not showing increased virulence or killing power is thus not entirely surprising. However, they are manifesting a stronger capability to infect and spread. This is also being witnessed in our country now as part of the second wave, particularly in Maharashtra and Delhi, the first to be hit by the pandemic.

Admittedly, there is currently a pervading public euphoria regarding the vaccines being developed, with many strongly believing that such vaccines would ultimately free us of the virus. Honestly, developing a safe vaccine, especially against RNA viruses like the Sars-Cov2, is a daunting job as it may take months to ensure that they are effective as well as safe. Moreover, most of these vaccines are being administered to young, healthy volunteers during  trials and it is still uncertain how safe they would be for the aged and people with co-morbidities who will probably get priority when the vaccines are finally released. It will take at least another six months to ensure that such vaccines don’t cause more harm than the virus itself before they are released for public use. Thus, there is little chance that a vaccine would be able to rescue us from this second wave.

As the transformed virus defining the second wave multiplies aggressively to cause severe infections, there is a higher probability for it to elicit a life-threatening “cytokine storm” during which the chemokines released by the body can cause fatal organ damage. This is the most common cause of death from the Sars-Cov2 infection. As the virus gets more desperate and potent, there is no way to predict who amongst us would survive such a cytokine storm. But with more people getting infected, the mortality rate is certainly expected to surge.

Amidst this new threat of a second wave, large groups of people are impatiently waiting to venture out for frivolous socialising as well as preparing for the upcoming festive season. This is an alarming trend. These individuals must realise that this time around the virus is more aggressive and unlikely to spare the impatient or unprotected. Once infected, they can become potential threats for all, especially the old and the sick, besides risking their own lives. It would be prudent to appreciate the underlying risks of gambling with this virus.

Finally, a word for those getting impatient to bid Sars-Cov2 good-bye: it would be sensible to come to terms with the fact that this virus is here to stay. We need to mentally and physically gear up to deal with its prevalence in our lives.

The writer heads the department of biotechnology and Dr B.C. Guha Centre for Genetic Engineering and Biotechnology, University of Calcutta