THE THIN EDGE | Zoom has produced its own protocols, absurdities and hilarities 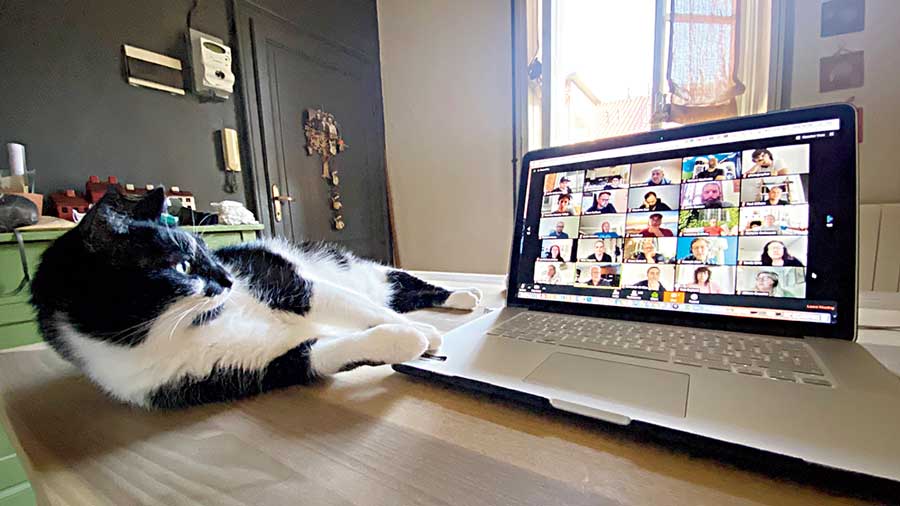 For those of us privileged enough to be able to work from the comfort of our homes, one of the biggest things the pandemic has brought into our lives has been Zoom and other similar video-conferencing applications. The basic concept is not new; Skype, Google Chat and, more lately, smartphone video-calls, have been around for a while; what Zoom et al have added to the mix is the possibility of several dozen or more people being able to see and hear each other at the same time. Had there been no Covid-19, the usage of these apps would have spread unevenly and perhaps at a slower pace, chiefly being used by commercial corporations while the rest of the world went about its Zoom-free business. What the pandemic has ensured is the rapidly multiplying usage and the absolute centrality of these web-conferencing programmes in many of our lives.

As with any new technology, gizmo or fashion, the Zoomiverse has produced its own protocols, etiquettes, tropes, absurdities and hilarities. In India, we’ve now become used to the verbal brawls that pass for television debates; therefore it is really funny how quickly participants on Zoom calls have learnt not to interrupt each other; everyone seems to have understood that the limits of digital sound mean that a bunch of people speaking together turns into incomprehensible static; it’s wonderful how quickly we have reverted to being well-behaved Class VIII students, raising our hands for permission to speak. The other thing we’ve instinctively grasped is the need to sit quite still, from seeing others fidgeting and moving around, creating a cell of distraction in the mosaic of faces. What Zoom has also done is made us physically schizoid. Now there is the whole business of what you wear for a Zoom meeting, about how one pays detailed attention to what is visible on camera and completely ignores what is out of frame and below the desk. All sorts of jokes abound on the internet about how high-end tailors are now selling half-suits or ‘Zoom suits’, with several cartoons showing a man or woman sporting colourful pyjamas or slovenly track pants and slippers, but attired on top in the crispest of formal office-wear.

The entire presentation of the self becomes distilled into the frame being captured by one’s computer camera. The advice goes that at the start of any Zoom session, you should only switch on the camera and mike after having made sure of how you look and what is visible and audible. Sometimes, of course, there are accidents. There is the unfortunate journalist in New York who turned himself into a world legend when his camera caught him vigorously pleasuring himself during an office meeting; there is the staff member of a city council in Brazil who decided that the municipal committee meeting he was attending was too tedious and entered into coital action with his partner, neglecting to switch off his camera first. The journalist in New York lost his job, the world-weary woman hosting the municipal meeting merely used her over-ride to switch off the staff member’s camera and everybody continued as though nothing had happened.

There are also subtler, less dramatic pleasures to be derived from what one can only call Zoom-watching. Take, for instance, the whole business of background and lighting. Apparently people spend a lot of time ‘sculpting’ their faces with light in preparation for important Zoom meetings. It seems that an ordinary old lamp or room illumination will no longer do; ring lights used by professional photographers have now made their way into academics’ studies. As for the backgrounds, suddenly we have become like mannequins in a puppet theatre. It’s not just about one’s face or costume, it’s also about giving oneself the ensconcement of an illusory environment. People know just how much time they themselves spend checking out what is visible behind other Zoom participants. It stands to reason, therefore, that others will have the same prying, judgmental gaze focused on your frame. The special effects concept of the green screen from cinema has now been imported into video-conferencing and people can digitally insert different backgrounds. So, a cousin living in a Manhattan high-rise sits in a thick tropical jungle; every time she gets up to get a glass of water she disappears into the foliage; a well-known Covid-expert doctor sitting in Gurgaon has a huge American ranch-style living room sprawling behind him, complete with a grand piano.

Then there are the people who couldn’t care less — veritable vessels of insouciance who leave their surroundings untouched. These characters fall into two categories. There is, for instance, the famous desi tenured academic sitting in the study of his house near his Ivy League university. Unlike the good doctor in Gurgaon, this is a real American house, large, airy, rooms opening into rooms, bookshelves marching away as far as the eye can see. Unlike the mensongious backdrops of people who photograph their friends’ bookshelves to use for their green screens, you know this background is real because you can see the curtains fluttering in the large picture windows. Then there are those people who actually don’t give a damn. On a much-forwarded meme there is a still from the Zoom ‘window’ of the Arab academic, Talal Asad, which shows the epic chaos of the study behind him, including his exercycle being used as a clothes rack. The text above it concludes: “Talal is not worried about log kya kahenge regarding his Zoom background. Be like Talal.” An academic friend of mine has become a fan of a senior English scholar she follows in Zoom seminars. Having spent her whole life in wild landscapes, this professor, too, dries her laundry within the frame of her camera. While my friend values the deep scholastic knowledge and insights, her voice takes on the excitement of a bird-watcher at the changing laundry in the background: “Today she’s hung red pyjamas!”, “Oh, she’s washed that polka dot t-shirt again!”, “Oh-ho, she really needs to dump those torn argyle socks!”

Only time will tell if this Zoom moment is just that — a freakish point in our history when we were obliged to work with a fairly primitive digital interface solution — or whether it was a hinge point when we transitioned from being a (semi-intelligent) species that mostly interacted face-to-face to one that increasingly began to use technology to abbreviate most of our essential exchanges, most of us happily or unwillingly reducing ourselves to a screen inside our room, to an obsessively arranged, minutely observed box within a box.