The Delhi violence is a symptom of a vastly altered India 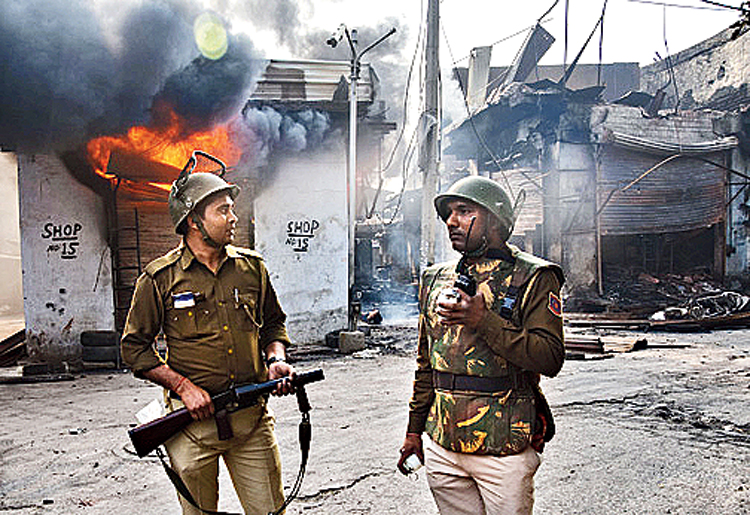 The carnage of Delhi, horrific as it was, cannot be understood as only about the volatilities of a low-income tinderbox on one edge of the capital. It has to be understood in the context of the never-before circumstances we are in
(PTI photo)
Sankarshan Thakur   |   Published 03.03.20, 06:52 PM

“Furniture and goods flung from homes and shops...”

Familiar headlines. Headlines we’ve seen leap out nearly ten days now from a strip of Delhi gone phosphorescent with hate and the mayhem it often spells. These could well have been headlines from Delhi. They aren’t. They are headlines from more than eighty years ago, from a faraway place called Germany and its overrun neighbourhood whose uneasy resonance amidst us we must begin to sense.

Here are the real, fuller headlines.

“All Vienna’s synagogues attacked; fires and bombs wreck 18 of 21”

These headlines appeared on the front page of The New York Times of November 11, 1938. The reports recounted what later came to be known as Kristallnacht, or the night of broken glass. It set off events that would stain human history as never before. Or thereafter.

We aren’t there yet, but we may be on a proactive toboggan down that road. We must caution ourselves and be warned before it is too late that we are acquiring those stains willingly and unabashedly. We are acquiring them with a war cry that is fast becoming the flaming credo of the ruling establishment, its apparatchik and its apprentices: “Desh ke ghaddaron ko, Goli maaro saalon ko!”

The carnage of Delhi, horrific as it was, cannot be understood as only about the volatilities of a low-income tinderbox on one edge of the capital. It has to be understood in the context of the never-before circumstances we are in. The clues that lie woven into the cluster violence of Delhi make it far more unspeakable and portentous than any other communal riot in independent India, its short roll-out and relatively lower toll notwithstanding.

This is a vastly and swiftly altered India. The essence of that alteration, it must be bluntly said, is the cauterization of the Muslim psyche and its space in the national scheme. Its manifestations are many and varied. This India, for instance, does not have a Muslim majority state any more; the only one we ever had was truncated and reduced to a Union territory last August. This India has come to widely celebrate a shameful act of vandalism and its consequences. This India has rewarded those vandals. This India is at peace with — and often exhorts and applauds — wanton murder of folks for what they eat or wear or how they pray. This India is a nation where Indians have begun to routinely rejoice in the plunder and pathos of other Indians. This is an India which will, under stubborn executive diktat, not flinch from rendering vast numbers of its citizenry stateless.

This needs to be said again because it requires re-stating: The reasons that powered Narendra Modi’s 2019 romp to power were radically different from those that secured him helmsmanship in 2014. These reasons were not about vikas, these reasons had nothing to do with rage or ennui at a dispensation that had descended into corruption and paralysis, these had nothing to do with hope or aspiration for a surging modern India. Modi had not delivered credibly on any of those to have secured a more robust endorsement. What he had begun to deliver on was his core, and often deceitfully unspoken, promise: Hindu Rashtra, a Hindu Reich. Inspired by the ideas and methods of the Reich of Adolf Hitler and his criminal accomplices. From plans to radically reshape Delhi’s seats of power to plans for reordering the people of India, the march towards a Hindu Reich is resolutely afoot. This is a sacred project, it will not be shaken in its resolve, it will not be apologetic about whatever it takes to get done. Dozens are brutally slaughtered in the capital, but there need be no expression of remorse, no regret, no assuaging. There’s no place for any of that. To fashion the new, in the famously intoned wisdom of the prime minister, Narendra Modi, what’s old and effete must first be scratched and scraped off.

That is, broadly, the context in which the Delhi plunder — of lives, of property, of faith in institutions of governance and public order and of investment in a just and equitable regime — must be understood. It was a violent powder-flash brought upon by gas-lights. Those gas-lights have not been put off, nor will be. Because, in the understanding of some of those who articulate the way ahead from where India stands today, this is an unfinished “civilizational war” that needs to be waged to its “logical conclusion”. Here’s what R. Jagannathan, editorial director of Swarajya, an opinion portal that mirrors the consciousness of the establishment, said recently off his Twitter handle: “Hindus should know they are in a long term civilizational war. Every Hindu must commit to do his bit and fight on till the goal is achieved. Ensuring global peace and diversity and pluralism depends on deleting the ideas propelling predatory, expansionist and imperialist faiths.”

Taken down by the platform, Jagannathan appeared via another handle to justify his standpoint and assert he would rather quit Twitter than delete his post. This is what he said: “Hinduism is being limited by cults that are predatory, expansionist and imperialist... you need to fight this war till it comes to the logical conclusion...” Jagannathan insisted that he believed he had said nothing objectionable.

There’s a question here that needs to be asked. Since when, under the scheme of the Constitution that the prime minister, Modi, pays obeisance to and swears by, did exhorts to war and to Hindu absolutism become not objectionable?

But it must also be said, in Jagannathan’s defence, that he doesn’t bear the same reverence to the Constitution as the prime minister. He has, in the past, remarked upon its foreignness and the need for changes. He isn’t apologetic about any of that. He is a Hindu supremacist. He is not alone in that category, but he is unafraid and honest about calling himself out. Jagannathan’s viewpoint could also help us locate the context to the whys and wherefores of Delhi, and where the consequences might lead us, or are intended to.

There is yet more context, alas. There are fragments of a memoir Stefan Zweig wrote after managing to escape the Nazi boot-tramp across Europe in 1941. This is what he wrote of a technique that Hitler and his men also employed. They effected their most extreme measures gradually, one after another, so as to get a sense of how each new outrage was received. “Only a single pill at a time and then a moment of waiting to observe the effect of its strength, to see whether the world conscience would still digest the dose... [T]he doses became progressively stronger until all Europe finally perished from them...”

Does that also sound familiar? Like those headlines from the Germany of 1938? Does that remind you of how the chronology of new citizenship measures, some taken, some in abeyance, has been spelt out? Delhi is located deep in that context too, in the deep anxieties of it.

PS: Zweig’s memoirs were titled “The World of Yesterday”. We could be in the troubling throes of the world of tomorrow.