How the night of broken glass was planned and executed 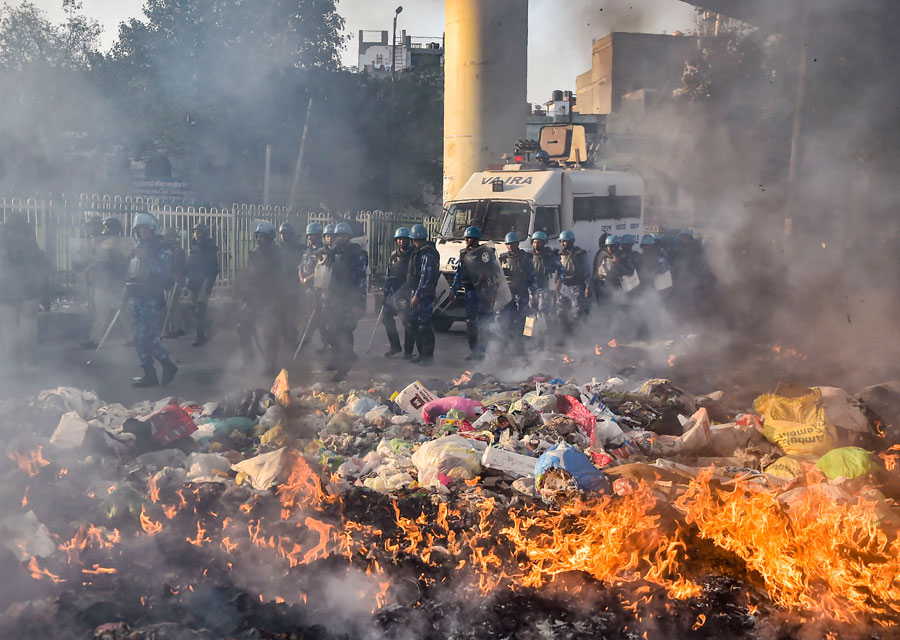 Security personnel conduct flag march during clashes between those against and those supporting the Citizenship (Amendment) Act in north east Delhi on Tuesday.
(PTI)
Samantak Das   |   Published 27.02.20, 07:42 PM

At about 9:45 on the morning of Monday, November 7, 1938, 17-year-old Herschel Feibel Grynszpan, a stateless, unemployed Jewish refugee, living in Paris with his uncle under the perpetual fear of arrest, walked into the German embassy on 78, Rue de Lille, in the fashionable Seventh Arrondissement, and asked to meet the German ambassador to France to whom, he said, he had to hand over an important document. Since the ambassador had just gone out for his morning constitutional, the duty clerk asked Grynszpan to meet the relatively junior diplomat, Ernst vom Rath, instead. Grynszpan walked into Rath’s office, called him a “filthy Boche”, pulled out a revolver he had bought earlier that morning, and shot him five times in the stomach to — as he had written in a postcard to his parents that was found in his pocket — protest against, and bring to the world’s notice, Nazi Germany’s persecution of 12,000 Jews. He made no attempt to escape when the police came for him. The German Führer, Adolf Hitler, sent his personal physician, Karl Brandt, to tend to the grievously wounded Rath, who, in spite of the best efforts of German and French doctors, died two days later.

News of Rath’s death reached Hitler in Munich, where he was celebrating the 15th anniversary of the abortive Beer Hall Putsch, along with other functionaries of the National Socialist German Workers’ Party, better known as the Nazi Party, among whom were present the minister of propaganda, Paul Joseph Goebbels, and the Gestapo chief, Heinrich Müller. After discussing matters with Hitler, Goebbels made a fiery speech to a group of veteran stormtroopers, urging them to avenge Grynszpan’s hideous act in the guise of “spontaneous demonstrations”; telephone calls were made across Germany asking for many more such “spontaneous” actions to take place against Jews. Later, shortly before midnight on November 9, Müller sent a telegram to all police units across Germany telling them that “in shortest order, actions against Jews and especially their synagogues will take place in all of Germany. These are not to be interfered with”. Between then and the following day, November 10, 1938, hundreds of synagogues were severely damaged or totally destroyed; about 7,500 Jewish businesses ransacked, looted, and/or burnt; at least 91, possibly more, Jews murdered; and an uncountable number of Jewish homes, hospitals, schools, cemeteries, and so on attacked. The perpetrators were often the neighbours of those they killed, looted, attacked, or harmed in other ways. Obedient to the orders of their boss, Gestapo chief Müller, the police arrested some 30,000 Jewish men between the ages of 16 and 60; to accommodate them, facilities at the concentration camps of Dachau, Buchenwald, and Sachsenhausen were expanded. When synagogues were put to the torch, firemen stood by, following explicit instructions not to interfere unless, of course, neighbouring “Aryan” buildings were threatened. The night of November 9-10, 1938, has earned a permanent place in the history of human infamy as “Kristallnacht”, (literally “crystal night”, sometimes rendered as “night of broken glass”), referring to the millions of shards of shattered glass that littered the streets where Jewish homes, schools, synagogues, shops, buildings, and so on had been damaged or destroyed. Kristallnacht, also known as “Pogromnacht” or “the November Pogrom”, is generally acknowledged as the first pogrom in Nazi Germany.

The online Encyclopaedia Britannica tells us that the word “pogrom”, which came into English from Russian via Yiddish, originally meant “devastation” or “riot” and was “usually applied to attacks on Jews in the Russian Empire in the late 19th and early 20th centuries”; it is now used to describe “a mob attack, either approved or condoned by authorities, against the persons and property of a religious, racial, or national minority”. It is possible to argue that Kristallnacht gave birth to a new kind of pogrom, which was both a culmination of events (sporadic attacks on, and sustained propaganda against, Jews, accompanied by the passing of anti-Jewish laws by the German State) as well as the inspiration for a new cycle of ruthless anti-Jewish measures (fining the Jewish community for the damage caused by the events of Kristallnacht, preventing German Jews from claiming insurance, barring them from theatres, making Jews travel in separate train compartments, and so on) leading to the formulation of the “final solution” — the total extermination of all Jews from the face of the earth. The modern pogrom is thus both an end and

a beginning: the end of a cycle of relatively minor attacks on a targeted community (which may be physical as well as otherwise), and the beginning of a new, State-sanctioned and sponsored, and efficiently discharged, series of violent assaults (accompanied by legislative measures to hinder or wholly prevent any kind of remedial action), often culminating in genocide.

It is worth noting a few other features of modern pogroms. First, the sustained demonizing of the targeted minority community, and the labelling of members of that community as posing a threat to the integrity and identity of the majority community (which is often conflated with the identity and integrity of the nation); such demonizing is carried out over a significant span of time by a variety of actors, both State and non-state, using various channels and forms of communication before, during, and after, the actual physical assaults on persons and property belonging to the targeted community. Second, the naming and shaming of those members of the majority community who challenge, protest against, or question the need for, the violence unleashed on the targeted community, and, often, the social and/or professional ostracization of such individuals, which might include the enactment of laws, rules, or regulations banning such protests or challenges; if such protesting individuals are government functionaries, they may be transferred, suspended, prosecuted, or, in extreme cases, imprisoned. Third, the support of the State, either through silence, inaction, overt or covert incitement to violence, and, perhaps most importantly, the labelling of violence against the targeted community as spontaneous retaliation against acts committed by a member or members of the minority community (see the story of Herschel Grynszpan recounted earlier), beyond the best efforts of the State to control it. Fourth, the deployment of what the noted political scientist and long-time scholar of India, Paul Richard Brass, calls “diversionary tactics” which, in his words “are essential to the production and reproduction” of “mass collective violence”. The process of diversion begins, Brass reminds us, with mislabelling, where a more extreme form of violence is labelled, either by its perpetrators, or supporters, or even scholars, as a lesser form. “Pogromists insist that the violence that has just occurred is nothing more than a riot. Genocidal acts are labelled by their perpetrators as merely spontaneous revenge and retaliation by justly and excusably outraged members of a group, acting spontaneously against an ‘other’ group whose members have misbehaved.” Finally, when a pogrom is underway, the silence of those who are at some distance from it — whether physical, intellectual, or emotional — and who refuse to take cognizance of the action and the discourse around it becomes complicit in the downplaying, and ultimate justification, of such violence. A pogrom, which some might insist is nothing more than an ordinary riot, can quite easily turn into genocide.

The author is professor of Comparative Literature, Jadavpur University, and has been working as a volunteer for a rural development NGO for the last 30 years.