Advertisement
Home / Opinion / Will NRC be a wedge in India-Bangladesh ties?

Will NRC be a wedge in India-Bangladesh ties? 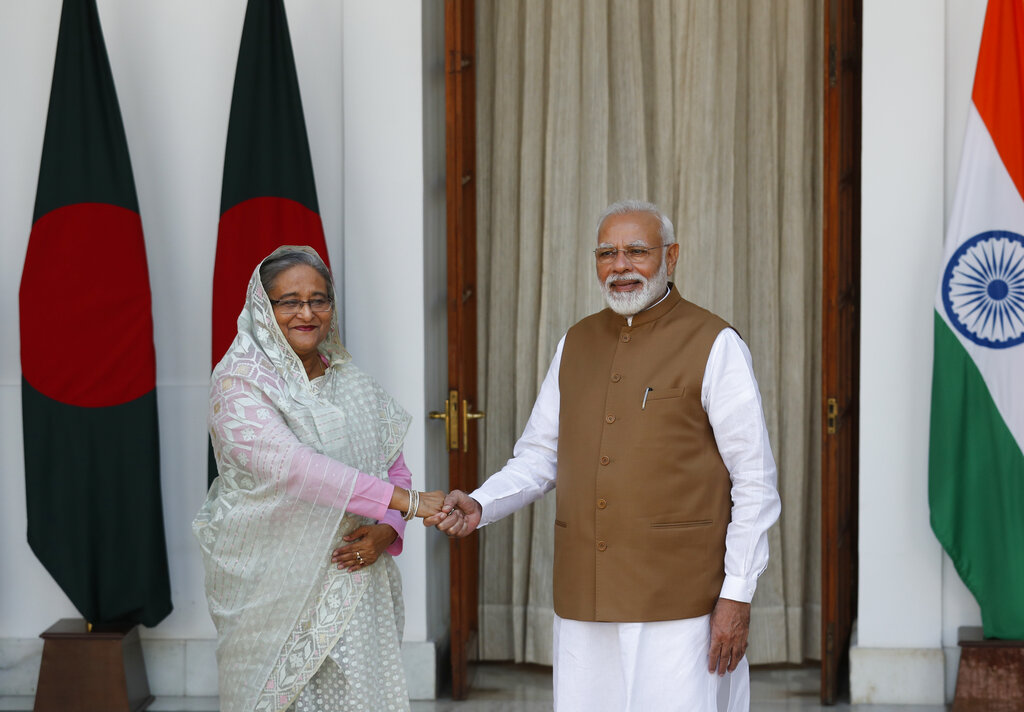 A shared history, geographical proximity and cultural affinity are parameters that define cross-border relations. The visit of the Bangladeshi prime minister, Sheikh Hasina, to India earlier this month highlighted strong bilateral ties with an announcement upholding “the importance of effective border management for ensuring a tranquil, stable and crime free border”.

Of the 4,096.7 kilometre India-Bangladesh border, approximately 3,052.014 km has been fenced and the ongoing work in the remaining area is expected to be completed by March 2020. Both the Indian prime minister, Narendra Modi, and Hasina appreciated the positive impact of haats on the lives and livelihood of the people in remote border areas. At present, there are four border haats — two each in Meghalaya (Kalaichar and Balat) and Tripura (Srinagar and Kamalasagar). Efforts are on to expedite the establishment of 12 border haats.

The sense of bonhomie and shared umbilical cord is more than evident at these haats. When I visited the one at Kamalasagar, 60 km from the Tripura capital, Agartala, the Border Guard Bangladesh welcomed me warmly onto their side and insisted on a photograph. “Consider this your home,” was the common refrain. The Indian side of the border was much more guarded. Not only are permits of every Indian entering the haat stringently checked, one also did not notice the “won’t you walk into my parlour” invocation to Bangladeshis by any of the Border Security Force jawans on the Indian soil.

When the Centre decided to replicate Wagah’s beating retreat ceremony on the India-Bangladesh border in Tripura in 2016 and sanctioned 18.9 crore rupees for a stadium at Akhaura, west of Agartala, there were misgivings aplenty. Especially since the BSF on the western front and the Pakistan Rangers indulged in a symbolic parade of rivalry and brotherhood, watched from the galleries in India and Pakistan on either side of the iron gates in a frenzy of raucous patriotism and melodramatic display of animosity.

However, after having witnessed the flag-lowering ceremony on the Tripura-Bangladesh border, I realized the gulf between these boundaries. Agartala boasts of border gates and the relation between the neighbouring countries are generally cordial. In Tarapokhar village in the Sonamura sector, 87 km from Agartala, even crossing the zero line between India and Bangladesh proved to be a cakewalk under the benevolent gaze of BSF jawans.

Stories of Partition are ingrained in those rendered refugees on the whims of governments. And borders are often witness to some moving tales of reunion. At other times, the schism is underscored by families remaining out of reach only for want of a passport.

Last month, the eastern border played host to a tearful, cross-border reunion of a mother and daughter after 15 years. A colleague witnessed Lakshmirani Pal from Chunta in the Sarail subdivision of Brahmanbaria district in Bangladesh reuniting with her daughter, Kanan Pal, who is married to a family in Agartala. Of Lakshmirani’s six daughters, five are married in Bangladesh and only Kanan lives across the border, so the reunion at the flag-lowering ceremony was infinitely moving. Four days later, the Bengal chief minister, Mamata Banerjee, extended birthday greetings to Hasina. “Heartiest birthday greetings to the Prime Minister of Bangladesh, Sheikh Hasina. Let ties between #India and #Bangladesh strengthen with every passing year,” Banerjee tweeted.

However, symbiotic relationships are prone to fray when governments turn hostile. One need only look at the Mexico-US border as an example. A decade ago, we could breeze into Juarez in Mexico from El Paso in Texas. But the scenario now, with the “wall” being erected, is so ominous that it is safer to clamber up the Franklin Mountains for a bird’s eye view. Will the National Register of Citizens and Hasina’s dogged detractors (now crying themselves hoarse over the recent student lynching) drive a similar wedge in Indo-Bangla bonding?