If you think this is about one Indian government showing some spine, you’re wrong 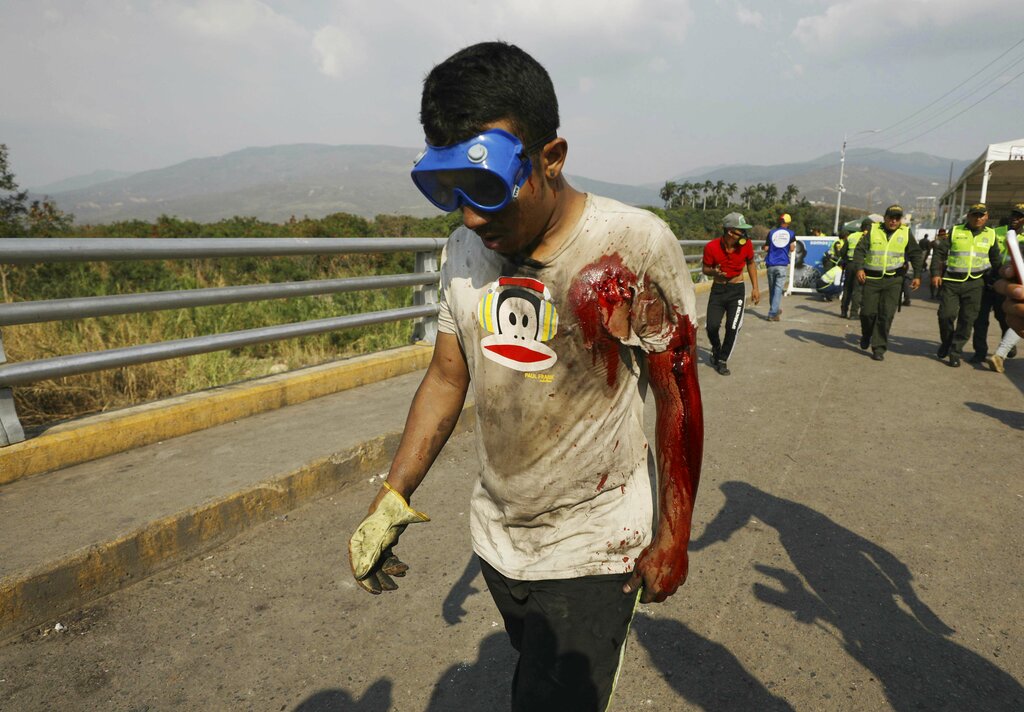 A bloodied Venezuelan youth walks on the Simon Bolivar International Bridge after getting injured during clashes with Venezuelan National Guardsmen who are blocking the entry of US-supplied humanitarian aid in La Parada, Colombia, on February 25, on the border with Venezuela
AP Photo
Charu Sudan Kasturi   |   Published 27.02.19, 11:36 AM

The India-US embrace today is much tighter than it was in 2001, in the chaotic days after the September 11 terror attacks. Yet, a sense of déjà vu is hard to avoid these days from the Indian perspective as the United States of America tries to secure, country-by-country, international support for regime change in Venezuela.

There’s, of course, the obvious parallel. Back then, President George W. Bush had infamously said of his soon-to-be-launched war in Afghanistan: “Every nation, in every region, now has a decision to make. Either you are with us, or you are with the terrorists.” Eighteen years later, the speaker is the current US secretary of state, Mike Pompeo, and the context Venezuela and its embattled president, Nicolás Maduro. “Now it is time for every other nation to pick a side,” Pompeo told the United Nations security council in January. “Either you stand with the forces of freedom, or you’re in league with Maduro and his mayhem.” On February 12, the national security adviser, John Bolton, issued an even more direct threat, commenting on Twitter on an article on India’s oil purchase from Venezuela: “Nations and firms that support Maduro’s theft of Venezuelan resources will not be forgotten.”

What’s less openly acknowledged is why — despite a nuclear deal, a strategic partnership, a common rival in China and multi-billion dollar defence purchases since 2001 — India still refuses to sign onto America’s plans for overseas regime change. The answer isn’t principles, though that’s what the ministry of external affairs will tell you. It isn’t innate love for the current regimes in Venezuela, Iran and elsewhere that the US wants to topple. When it boils down to the reason, it isn’t even realpolitik. Ultimately, the answer is America’s track record, and the distrust that it still evokes in India’s strategic community.

“We are of the view that it is for the people of Venezuela to find [a] political solution to resolve their differences through constructive dialogue and discussion without resorting to violence,” the external affairs ministry spokesperson, Raveesh Kumar, has said, outlining the Indian government’s position. It might appear boilerplate, but in New Delhi and in Washington, American diplomats have interpreted the statement for what it is: a clear assertion that India will not back external intervention in the oil-rich country.

Strip away the diplomatese, and the unstated worry is: what’s to stop the US from some day attempting a regime change in India too, if it is really unhappy with the state of bilateral relations? The US claims of support for human rights in countries where it seeks regime change has few takers in the developing world where memories of colonialism and the subsequent selective overthrow of governments — often democratically elected — are fresh.

That was Indira Gandhi’s worry in the 1970s. Despite public statements to the contrary — Prime Minister Narendra Modi told the US Congress in 2016 that the two countries had left behind the “hesitations of history” — mistrust lingers. Occasionally, it filters through into the open too. At the height of the Anna Hazare-led anti-corruption movement against the United Progressive Alliance government in 2011, the Congress questioned if foreign powers, such as the US, were funding the campaign. The US denied the allegation, and there’s no evidence to back the Congress claim.

Make no mistake, blaming the US or other external actors is also a tactic that governments — in India and elsewhere — have frequently used to discredit popular movements against them. But there’s no escaping that there’s also genuine suspicion at play. That’s why it’s no surprise that Venezuela isn’t the only country where India remains unwilling to support regime change.

Yesterday, India supported Iran in celebrating ‘Chabahar Day’, hosting investors and governments from the region at the strategic port in the Gulf of Oman, which New Delhi is developing. Even as the Donald Trump administration continues to ratchet up tensions with Iran, India is signalling that it intends to publicly do business with the Islamic republic. Indian officials say New Delhi also intends to seek a continuation of the special waiver that allows the purchase of oil from Iran without attracting sanctions against Indian companies from the US.

If you think this is about one Indian government showing some spine, you’re wrong. The previous UPA government took similar positions ahead of the invasion of Libya in 2011 and over the ouster of the Viktor Yanukovych regime in Ukraine in 2014. The BJP-led government of Atal Bihari Vajpayee, too, managed to steer clear of the Iraq War despite pressure from some sections within the party to send troops there.

Are India’s strategic establishment and political class being paranoid? It’s hard to say. But the US certainly hasn’t helped its case. Dov Levin, a researcher at Carnegie Mellon University, counted 81 instances of “partisan electoral interventions” abroad by the US between 1946 and 2000 in a September 2016 paper published in the Conflict Management and Peace Science journal. That doesn’t include overt US-backed coups like the ones in Iran or Guatemala in the 1950s, or military interventions like in Iraq or Libya.

With the US leading the campaign for the world to recognize a self-appointed president, Juan Guaidó, as the new leader of Venezuela and the NSA, Bolton, advocating regime change in Iran, it’s clear that Washington’s approach remains the same. Till it changes, so should India’s.

At Venezuela border, a strange and deadly showdown over aid