What the dead are capable of telling about the living

Can the endurance of spirits be attributed to arbitration from the afterlife? 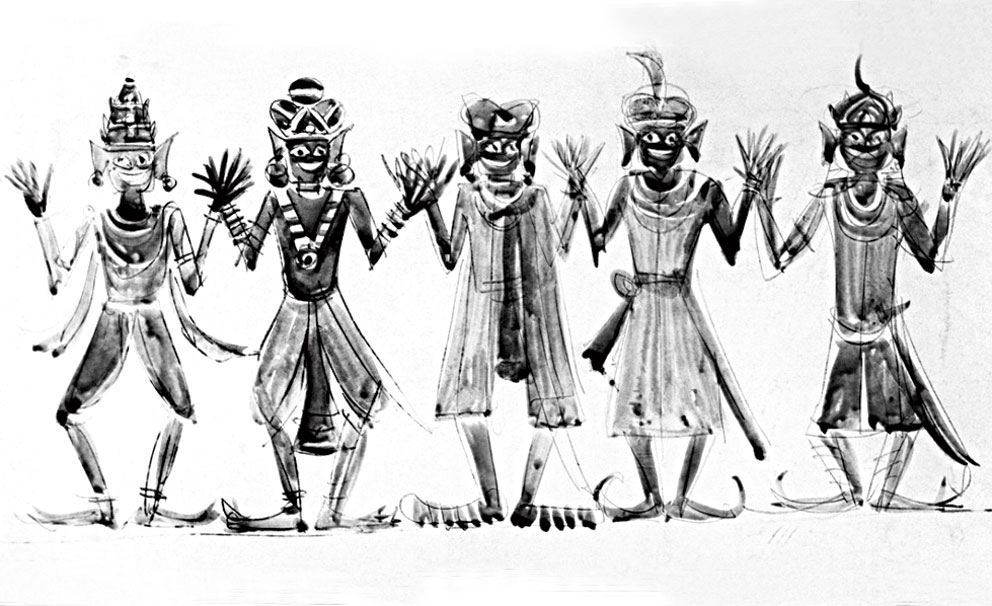 One of several sketches of the 'Bhooter Naach' (the dance of the ghosts) sequence by Satyajit Ray
Image source: inkandmagic.wordpress.com
Uddalak Mukherjee   |     |   Published 26.11.19, 08:10 PM

‘PYTs’ — Pretty Young Things according to the Millennial Dictionary — turned on their distinctly eerie charms on Halloween. Earlier this month, Calcutta’s newspapers faithfully carried photographs of young women and men haunting plush clubs in strange attires, their faces splashed with garish paint. The sightings, to put it mildly, left a chill running down the spine, even though the PYTs may have intended otherwise.

Of course, the millennials were not being original. They were merely reinforcing the bond between spectral and spookiness that is acknowledged by cultures around the world. (There is even a name for the fear of feral spirits: phasmophobia.) The Anglophone world has its ghosts and ghouls; the Middle East shudders at the thought of djinns and afridis, while the Japanese, a people apparently sworn to reason, are known to tremble when they spot the yurei, perhaps in a Kabuki performance.

Literary traditions, unsurprisingly, have served as excellent registers of the living’s fear of, and fascination with, the dead. Be it the sudden appearance of Banquo’s ghost — a bloodied corpse seated on a stool at a banquet — in Shakespeare’s Macbeth, or the reference to the bejewelled Manimalika — a skeleton — standing bathed in the cold light of the moon in front of her husband in Rabindranath’s “Manihara”, ghosts, a superficial reading of great writings may suggest, merely function as symbols of the Uncanny.

Sigmund Freud read the Uncanny as the psychological experiencing of not something mysterious, but the familiar (“Das Unheimliche”, 1919). Unfortunately, the popular discourse has, more often than not, exhibited a disproportionate interest in the terror evoked by the supernatural, causing it to ignore sources — literary and scholarly — that have recognized the phantoms’ potential to be, in the memorable words of a columnist in The New York Times, “social critiques with cobwebs”.

Shakespeare resurrects Banquo not only as an apparition but also a manifestation of Macbeth’s guilt. Is Mrs Danvers’s obsession with Rebecca a mere psychological ailment in Daphne du Maurier’s novel? Or can her fixation with the dead woman be read as an ingenious strategy to get Rebecca’s husband to confess to a horrible crime? A more contemporary example of the dead serving as spirits of conscience would be Hari Kunzru’s White Tears in which Seth and Carter, obsessed with a purer form of the Blues, end up being complicit in cultural appropriation, causing the past — and its ghostly voices — to wreak vengeance for the transgressions committed by present-day America. Thomas Laqueur, a historian, has pointed out that the US, unlike, say, Germany, suffers from the paucity of memorial culture to acknowledge America’s endorsement of slavery, racial discrimination and ethnic crimes. That could explain the eagerness of the modern American ghost story to serve as a mirror reflecting the lesions of the past.

Humour — not horror — it can be argued, has been an element of distraction in Bengal’s bhooter golpo, occasionally preventing the reader from perceiving the brahmadwittyo, dakini, petni, jokkho, shakchunni and other distinguished members of the phantasmal cosmos as bona fide agents of justice and arbitration. Rajsekhar Basu, while regaling us with the antics of Shibu, Nadu Mallick and the matchless Karia Piret in “Bhushundir Maathe”, did not forget to pass a wry comment or two on the infirmities of law in colonial India. Lila Majumdar’s Shob Bhuture, a personal favourite, is a rich repository of just mediation by spooks to set right human affairs: here Shiji and Guji, the incorporeal boatmen, punish school bullies while Ahididi, a childless woman, finds liberation from a life of loneliness and drudgery in the company of a spectral brood of children. Shirshendu Mukhopadhyay’s stallion-borne Pagla Saheb — does he bear some resemblance to the Headless Horseman in Washington Irving’s “The Legend of Sleepy Hollow”? — is emblematic of the light of the law in a corner of the country darkened by a ruthless, shadowy mafia. Satyajit Ray, characteristically, used the Dance of the Ghosts sequence — a technical and satirical marvel — in Goopy Gyne Bagha Byne to condense subcontinental history and its sociology, riven with conflicts and cleavages chiefly along the lines of class, into a few magical minutes. Years later, public enchantment with the spirited spirit of the Mahatma in Lage Raho Munna Bhai, where a genial goon is transformed after discovering and adhering to the Gandhian way of life, showed that postmodernity has not been able to rob ghosts of their right to be the conscientious adjudicator.

Significantly, the arbiter from the afterlife cannot be dismissed as a figment of a fecund literary imagination. Serious scholarship — the work of the anthropologist, Piers Vitebsky, is an example — is in agreement with literature in this context. Through his illuminating studies of animist societies, such as the Sora tribe in India as well as Siberia’s Reindeer People, Vitebsky shows that in social settings on the cusp of rapid, unsettling transformations, the afterlife, speaking through the office of the shaman, can be an effective source of fortitude and reflection, allaying fears and anxieties of the collective in the course of a violent mutation of a familiar reality.

That ghosts can be vested with a therapeutic gift is unlikely to go down well with the rationalist enterprise. Some of the concerns of this constituency merit serious introspection. In India, with its patchy record in the spheres of education and health, psychological afflictions are often explained away — and even punished — as possessions. Yet, the claim of the unworldly on a moral, para-legal and philosophical edifice within specific milieux cannot be dismissed.

A literary critic had predicted the demise of the ghost story in the 1960s. Centuries earlier, the Enlightenment, it was believed, would put the final nail in the coffin of the undead. Neither, however, has come to pass. Could it be that the moral moorings of the twilight world have prevented the complete annihilation of spirits?

“Stay, Illusion,” Horatio had commanded the ghost in Hamlet. That could be because Horatio knew what the dead are capable of telling about the living.

Shot In The Dark

Halloween through the centuries