What our views on surviving cancer reveal about us

Perhaps more than any other illness, it is cancer that challenges the ability of the healthy to empathize with the sick 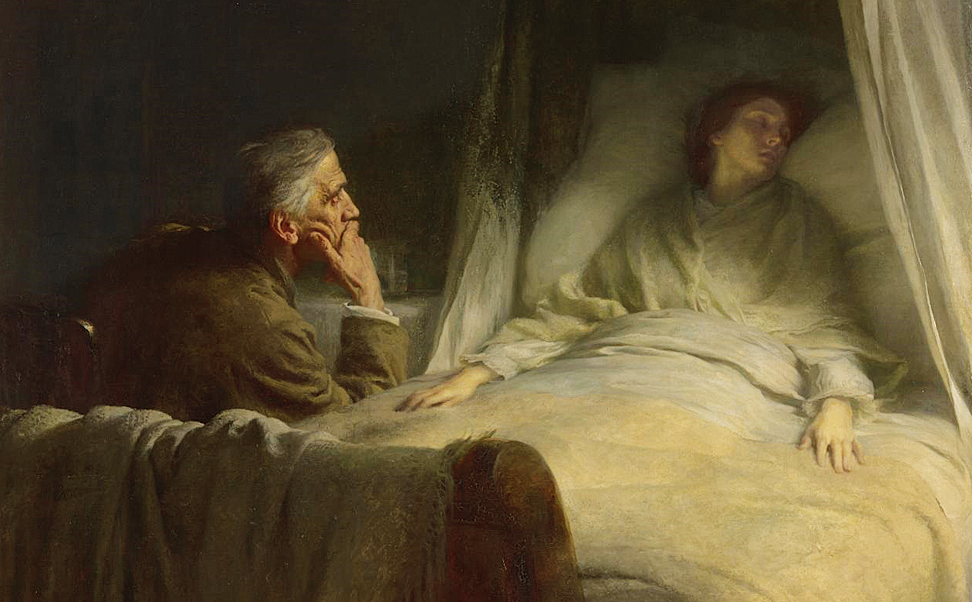 The Crisis (1891), by Frank Dicksee. Perhaps the pharmaceutical-lifestyle complex can exist only by denying the inevitability of the in-between state of life and death
(Wikimedia Commons)
Uddalak Mukherjee   |   Published 24.07.19, 03:55 AM

An apocryphal tale dating back to the Soviet era suggests that the dreary speeches of members of the Politburo were usually greeted with thunderous applause. The applause was the audience’s way of expressing relief at its liberation from a tedious speech. Indians have been known to suffer at the hands of garrulous politicians as well. But lectures can also be engaging, even invigorating. TED Talks — short, crisp videos of speeches that are meant to disseminate singular ideas — bear evidence of the power of the spoken word. Some of the most remarkable TED Talk videos that are available in the public domain include a poignant speech by Isabel Allende in which the author speaks about her fears of ageing; another masterful speech was delivered by Chimamanda N. Adichie in which the African novelist talked about human lives being a mosaic entity of overlapping stories.

To this impressive list, one must add Suleika Jaouad’s recent address. Jaouad, an Arab-American writer and advocate, has another identity, one that has — tellingly — eclipsed her other accomplishments. She has survived leukemia, a cancer of the blood, which, along with lymphoma and myeloma, are expected to account for nearly 10 per cent of new cancer cases in the United States of America this year.

In the TED Talk, Jaouad, predictably, takes her audience through her journey with her disease, describing the shock of the initial diagnosis — she had a 35 per cent chance of long-term survival— the years of brutal chemotherapy, her collection of neon wigs and her bond with other patients.

Soon, however, her narrative takes a hair-pin turn. Jaouad confesses that “the hardest part of my cancer experience began once the cancer was gone”. “[H]ere, among the living,” says Jaouad, “I felt like an impostor...”, going on to add that “sometimes, I even fantasized about getting sick again.”

What is ironic is that in the course of a talk, what Jaouad was possibly alluding to was the chilling possibility of the breakdown of conversation between the cancer survivor and the world. The challenge that cancer posits to medical science is formidable and well-documented. But what often goes unacknowledged is that unlike other maladies in the history of human illnesses — typhus, cholera, tuberculosis, malaria, small pox, even AIDS — it is cancer that most challenges the ability of the healthy to truly empathize with the stricken. The absence — failure — of a dialogic relationship between the wholesome and the broken reveals yet another challenge: the limitation of language — even of TED Talks — to effectively communicate the experience of the battle of survival, a conflict that is at once profound but also made mundane by its everydayness.

In Illness as Metaphor, first published as a series of essays in the New York Review of Books, Susan Sontag — she survived cancer of the breast and uterus — argued that societal metaphors ascribed to cancer patients could be like the proverbial noose, choking the afflicted. It is a contested, but also illuminating, proposition, one that Jaouad refers to obliquely in her speech. “So, when you go through a traumatic experience like this... they start telling you... you’re a warrior. They call you a hero, someone who’s lived the mythical hero’s journey... But it’s important that I tell you what this projection of heroism... does to people who are trying to recover.”

Is the burden of expectation that Jaouad and other survivors are being made to bear simply a result of the limitation of human empathy and language to comprehend the magnitude of the experience of not just the illness but also the process of healing? Is then the modern discourse on cancer complicit in excising — like a surgeon’s scalpel — the trauma that accompanies even the recovery from the disease?

These may not be idle speculations. For Jaouad may be pointing to the existence of a deeper cultural malady. “The divide between the sick and the well — it doesn’t exist. The border is porous. As we live longer and longer, surviving illnesses and injuries that would have killed our grandparents, even our parents, the vast majority of us will travel back and forth between these realms.” Sontag, too, was acutely aware of such a dual citizenship. “Everyone who is born,” she writes, “holds dual citizenship, in the kingdom of the well and in the kingdom of the sick.”

Yet, the overwhelming societal response continues to direct medicine and culture to strive and turn the border between health and illness impregnable. It is a noble but, as Siddhartha Mukherjee shows in his magisterial enquiry into cancer in The Emperor of All Maladies, also a futile endeavour. Mukherjee’s conjecture opens up a further line of thought. What then is the motive of the idealization of health if disease, some form of it, is inevitable? Perhaps the only way the vast, lucrative pharmaceutical-lifestyle complex can exist and prosper is to vigorously deny the inevitability of the in-between state of life and death that is now a feature of modernity.

Sontag’s dual citizenship, what Mukherjee calls the ‘new normal’— a life in the twilight zone between health and disease — demands a radical reassessment of our relationship with time, mortality as well as of attendant philosophies.

Luis Buñuel — the film-maker died of pancreatic cancer — had said that he preferred a slower death. “One that is expected, that will let me revisit my life... ” Was Buñuel being insensitive, even self-absorbed? Perhaps he was just being prescient. The global cancer burden is expected to rise by 27.5 million new cases each year by 2040, but modern medicine, the kind loathed by the Spanish artist, is also enabling cancer patients to live longer, scarred lives, turning death slower.

The ancient ones, Mukherjee hints, may have even had a word for such living. Onkos — oncology is its modern derivative — signified a ‘burden’ among the Greeks.

In colour therapy, grass can be yellow and the sky, pink

Art from a broken heart: An Inktober series on cancer