A sinking island of political pawns

For the residents of Ghoramara island of the Sunderbans, the upcoming elections hold the key to their survival 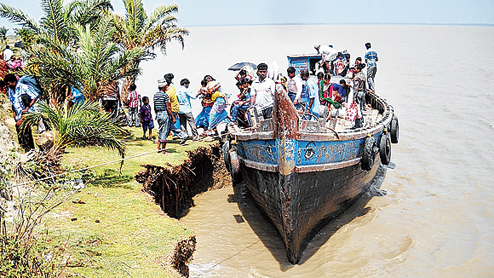 “How long can we keep our faith in words? I feel that not only have I been betrayed, but I have also betrayed my people. What else can I do except boycott the party gatherings [referring to the TMC] and withdraw from all this?” Walking alongside the river, as one observes the landscape that evinces the reality of the shrinking island, Minarul expresses his resentment. A 34-year-old resident of Ghoramara island of the Sunderbans, Minarul has been committed to the Trinamul Congress. In the upcoming Vidhan Sabha elections, West Bengal is poised at a historic juncture with the Bharatiya Janata Party making steady inroads with the hope of coming to power by uprooting the TMC.

Ghoramara, Minarul’s home, is the poster-child for the sinking Sunderbans. From the 1980s, local governments have been resettling its population in neighbouring Sagar island. Minarul explained how, in recent years, after much effort, he had managed to negotiate with the higher echelons of the TMC, including the MLA, and had received an assurance of rehabilitating 40 families. In exchange for their rehabilitation, he would guarantee that these families vote for the TMC. He says, “Nowadays when it is even difficult to bring consensus among three brothers, I brought 40 families to agree with each other.” He continued: “But, even with our best attempts in the last 7-8 years, not a single rehabilitation has taken place from the government's end.” Dejected, he says, “I have lost face; how can I return to ask for votes again? Even if five families would have been rehabilitated I could have understood that there is at least an honest attempt but to my despair we don’t see any movement... just the same old empty promises.”

As per the 2011 census, 1095 households still remain on the fast-sinking island. Current proposals for planned retreat and resettlement away from the Sunderbans are immensely problematic, not just because of the narrow cost-benefit analysis with which economic value is put on investing in lives and livelihoods but also because on other Sunderbans islands there are several push and pull factors, a diversity of desires and a lack of consensus among residents in the same village or even between two brothers of the same household, as Minarul suggested. Ghoramara’s case is different: all its remaining residents aspire to leave. So what is stopping the government from relocating these 1095 households?

The major impediment to rehabilitating residents is the very specific vote-bank politics in light of the upcoming elections. Ghoramara belongs to the Sagar constituency. Sagar island is where many of the households were previously rehabilitated. However, over the years, there is no space left on Sagar for an ingress of another wave of climate refugees. Moreover, sea-level rise is threatening the existence of Sagar too. This means that the remaining islanders of Ghoramara would have to be relocated to other islands, that is, other political constituencies. There is a proposal to rehabilitate them in Kakdwip and, as per the islanders, Kakdwip constituency is willing to offer them the requisite place and support to resettle. As it happens, both these constituencies — Sagar and Kakdwip — are currently under the TMC. But such a shift of populations would dilute the vote bank of the candidate who would contest from Sagar.

With elections coming up, the Sagar constituency is not ready to let go of this vote bank. Ghoramara has 3800 voters. In the last Vidhan Sabha elections in 2016, the TMC won the Sagar constituency by a margin of 18,000 votes. Hence, the rehabilitation of Ghoramara islanders to Kakdwip means that Sagar constituency will lose voters that almost equal one-fifth of its last election vote margin. TMC leaders from Sagar do not want to risk tilting any vote bank that they have already secured through their promises of rehabilitation. With the BJP making inroads, the TMC is doubly cautious about not disrupting its winning margin. As a result, there is no interest in maintaining, improving or sustaining any infrastructures that will protect Ghoramara’s islanders.

Ghoramara’s residents acknowledge that they receive enough aid from the government in terms of food, water, and other essential items. But Subala, a 37-year-old woman, reveals that this is not the kind of welfare they want to continue living on: “each spring tide or every monsoon, our farmlands and homes are engulfed; how can we survive? We don’t need subsidized food. If the government rehabilitates us we can farm, work hard and earn to make both ends meet. We want to live a dignified life.” However, the government values these lives only in the form of 3800 crucial voters and is not keen to rehabilitate them on the off-chance that such a move will unsettle its already tenuous vote bank.

In one sense, these are ‘surplus populations’; in another sense, each of these individuals is an integral voter and is, therefore, seen as essential in these upcoming elections. What is often glossed over in conversations around climate change among the new aristocracy of experts and in the corridors of power is the politics at the local level. Ghoramara’s residents are seen as important political actors. The choice, it seems, is to keep them afloat as long as they can vote.