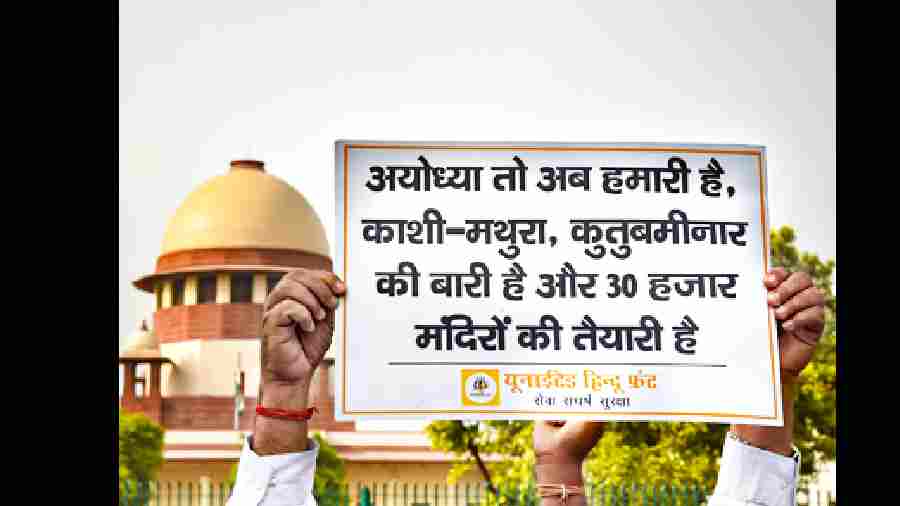 In the late 19th century, the French historian, Joseph Ernest Renan, came up with a new concept of the nation. At the time, the European understanding of the nation was anchored in racial and linguistic lines. However, Renan propounded that the collective identity of the nation wasn’t the result of any essential social or cultural attribute. Instead, the nation was simply a community of shared memory and shared forgetting.

“Forgetfulness, and I would even say historical error, are essential in the creation of a nation,” argued Renan. In Renan’s view, history was a crucible of brutality, and every nation was formed out of violence. Therefore, the unity of the nation depended on keeping shared myths, shared heroes, and shared struggles alive in memory, while forgetting the darker episodes of internecine strife. In his own country, this meant the suppression of the memory of the French ‘wars of religion’, when Protestants and Catholics had periodically slaughtered each other. “[E]very French citizen,” Renan claimed, “must have forgotten the Saint Bartholomew’s Day massacre, the massacres in the Midi in the thirteenth century.”

This is the context in which we must understand the Hindutva politics of avenging history that has presently gripped the country. The project of ‘recovering’ demolished temples in Ayodhya, Mathura and Varanasi from Muslims and ‘correcting historical wrongs’ has little to do with Rama, Krishna or Shiva. It is concerned with another kind of demolition and reconstruction on the site of our collective memory — the demolition of the basis of the old, secular Indian nation and building in its place a new Hindu nation.

The centrality of shared historical memory in the construction of the nation wasn’t unfamiliar to Indian nationalists participating in the freedom struggle. Colonial historiography had taken a sledgehammer to the nuances of the Indian historical experience by dividing it into a Hindu and Muslim period. As the Columbia historian, Manan Ahmed, wrote in his recent book, The Loss of Hindustan, these artificial categories were wholly illogical, conferring an “unanimity to hundreds of years of history linking the Arab kings of Sindh and Gujarat to the Ghazni and Ghuri warlords, to the sultans of Delhi and Bijapur, to the Shahanshah of Agra”. This exaggeration of communal divisions in colonial historiography, of course, dovetailed neatly into Britain’s self-legitimation as an enlightened arbiter of a hopelessly divided land.

Therefore, the first task mainstream Indian nationalist historiography set itself was to emphasise the shared heritage and ‘composite culture’ of Indian peoples. The clearest example here is The Discovery of India, where Jawaharlal Nehru described India as “an ancient palimpsest on which layer upon layer of thought and reverie had been inscribed.” Even when Nehru condemned Aurangzeb as a “bigot”, he framed him as an exception to the general outlook of Mughal rulers who “put themselves in line with the genius of the nation and tried to work for a common nationality and a synthesis of the various elements in the country”.

This emphasis of nationalist history on synthesis rather than conflict extended to other cultural fault lines. For instance, whereas many European historians had seen in the Aryan migration a story of violence and forced displacement of the native Dravidians, Nehru described the interaction that took place “between the incoming Aryans and the Dravidians” as the “first great cultural synthesis and fusion” of ancient India.

The post-colonial elite was unanimous in the celebration of these ‘shared myths’ (composite culture), ‘shared heroes’ (Kabir, Guru Nanak, Amir Khusrau) and ‘shared struggle’ (the participation of every section of society in the freedom movement) as the foundations of the Indian nation. Indeed, after its 1976 amendment, the Constitution made it incumbent on every Indian citizen to “value and preserve the rich heritage of our composite culture” as one of the Fundamental Duties.

This shared myth of pre-colonial Hindu-Muslim conviviality — where Hindu and Muslim elites had shared interests, while the masses participated in a shared syncretic culture — has long been dismissed as romanticised fabrications by both Pakistani nationalists and Hindu nationalists.

Yet, it has largely stood the test of contemporary historical inquiry. The historians, Catherine Asher and Cynthia Talbot, surveyed the wide swathe of medieval history in their book, India Before Europe, and described a unique culture created by the melding of Indic and Islamic influences. This extended not just to the Gangetic plains but also to southern India where “the Vijayanagara Kings incorporated many facets of Islamicate culture and practice in a dynamic synthesis...” Meanwhile, several anthropological studies of both medieval and colonial India have suggested that Hindu and Muslim villagers of a similar class were, in most respects, virtually indistinguishable from each other.

Of course, it cannot be denied that Hindu temples had been destroyed by medieval Muslim rulers. Whether it was largely driven by political considerations or Islamic iconoclasm is a valid intellectual debate. But when that debate spills into the public culture and demands the dilution of constitutional safeguards in the service of correcting ‘historical wrongs’ to the extent that something akin to a Truth and Reconciliation Commission is seriously presented as the only solution to salve Hindu passions, we must pause and reflect on Renan’s idea of forgetting. After all, the Mughals no longer exist and (as the Sikhs clearly understand), present-day Muslims have little to do with the actions of emperors like Aurangzeb.

Moreover, the truth is that the art of forgetting is far from alien to our public culture. Within this generation, we have seen the massacre of over a thousand people, mostly Muslims, relayed on our television screens during the Gujarat riots. And the people allegedly responsible for that brutality, whether through acts of commission or omission, are not long dead kings but those who are at the top echelons of power in the country today. Yet, it has become almost imprudent to state this fact in polite society, lest one be accused of dredging up the past.

Hindu nationalist ideologues love the term ‘Balkanisation’, associating it with any tendency they deem secessionist or ‘anti-national’. Balkanisation refers to the breakup of multicultural Yugoslavia in the 1990s, following the outbreak of wars, into seven distinct states. In an essay, the Serbian historian, Dubravka Stojanovic, argued that the implosion of Yugoslavia was preceded by the breakup of a constructed shared historical memory — what she described as the “Balkanization of memory”. In erstwhile Yugoslavia, the Eastern Orthodox Serbs, Muslim Bosniaks and Roman Catholic Croats had been living side by side in relative harmony. However, soon after the collapse of communism, these different groups became convulsed in the worst bloodletting in Europe since the Second World War, including the calculated massacre of 8,000 Bosniak men and boys in a single episode at Srebrenica. How did this come about? It started with right-wing Serbian nationalists, such as Slobodan Milosevic, refocusing Serbian memory to accounts of subjugation and humiliation at the hands of the Ottoman empire. A centrepiece of the trauma was a 1389 battle at the Field of Blackbirds in Kosovo, where an army of Muslim Turks defeated Christian Serbs, thus heralding the five-centuries-long Ottoman domination of the region. In 1989, Milosevic descended to the Field of Blackbirds to mark the 600th anniversary of the battle and delivered an incendiary speech with the theme of humiliation, suffering, treason and shame. The seeds of the coming genocidal campaign were by this time firmly planted.

It is worth quoting Stojanovic extensively on how Serbian nationalists dismantled the “fundamental myth” of brotherhood and unity that stitched together ethnically mixed Yugoslavians and in its place exalted a “memory of difference”. “Changes in the interpretation of history began several years before the war because hostility needed to be created. A new interpretation of the past was offered as a revelation, final realization, and liberation from earlier platitudes imposed on us by ‘enemies’. Historians suddenly became superstars, appearing on prime-time TV shows and revealing to millions of viewers the injustices we had suffered... that it was ‘us’ who were the real victims of all historical events: misunderstood, used, pushed aside, subjugated... This collective feeling is the best psychological groundwork for aggression presented as self-defence. The victim receives an indulgence for all future actions, being freed from moral responsibility. A victim cannot be a perpetrator.”

The more ‘respectable’ of Hindutva ideologues would tell you that all they want is an honest reckoning with history. That this has nothing to do with persecuting present-day Muslims, or furthering the ideological project of Hindu rashtra. Do not believe them.