Advertisement
Home / Opinion / Up for grabs 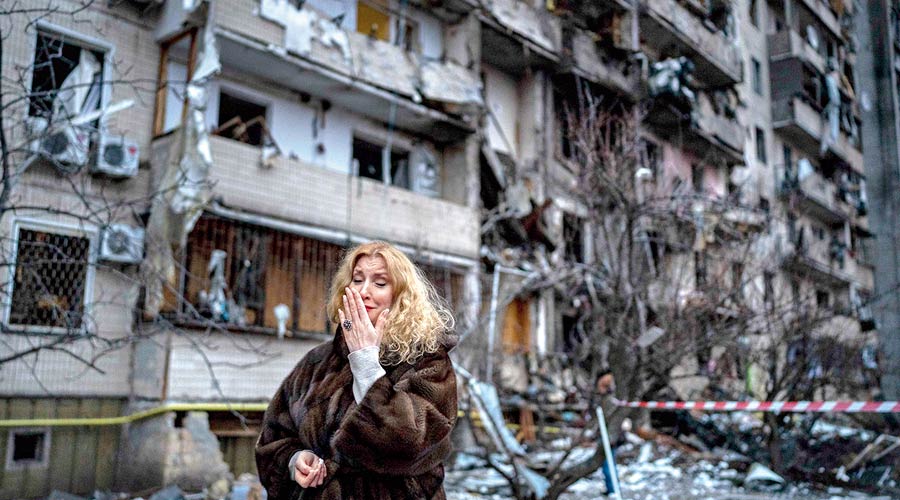 Natali Sevriukova reacts next to her house following a rocket attack on the city of Kyiv, Ukraine.
File picture
Mukul Kesavan   |   Published 27.02.22, 12:46 AM

Vladimir Putin anticipated Russia’s invasion of Ukraine by writing screeds about the essential one-ness of Russians and Ukrainians, united as they were, in his view, by a common origin in the medieval principalities of Kievan Rus. Putin insisted that Ukraine had no real tradition of independent statehood and blamed Lenin and the Bolsheviks for inventing a Ukrainian nation by designating eastern Ukraine as one of the fifteen republics that constituted the USSR after the 1917 revolution.

Before the revolution, Lenin’s fellow revolutionary, Joseph Stalin, had written an essay in 1913 in which he defined the nation state and tried to distinguish it from other kinds of States and solidarities. Stalin was keen to emphasize that nations weren’t based on racial or religious communities. He argued that “A nation is a historically constituted, stable community of people, formed on the basis of a common language, territory, economic life, and psychological make-up manifested in a common culture.”

Stalin’s definition is important not on account of its accuracy (many modern nations, including India, don’t fit every term of this definition) but because it captures the way in which most people think a nation should be defined: serial commonalities consolidated by an independent State into a political community of citizens.

Stalin wrote this essay partly because Marxists and communists, dedicated as they were to the cause of world revolution brought about by an internationalist proletariat, had a fraught relationship with nationalism. Nationalist loyalties constantly overrode working class solidarity and Stalin was trying to understand the nation state and its grip on the popular imagination. This was one reason why the Soviet Union defined itself not as a nation state but as a union of socialist republics, each republic being a nation state in its own right.

The USSR was a fraternal union of republics in name only. The Russian heartland of the empire that the Soviet Union had inherited from the Czars remained hegemonic and every republic in this union was systematically Russified, including Ukraine. The Ukraine that became a constituent republic of
the Soviet Union in 1922 was only the eastern part of modern Ukraine. This had formerly been a part of imperial Russia; western Ukraine had been historically ruled by Poland and Austria. Western Ukraine was annexed by the Soviet Union during the Second World War. This explains why eastern Ukraine has substantial Russian-speaking populations as also why the nursery of Ukrainian nationalism lies in western Ukraine.

Like all nationalisms, Ukrainian nationalism can be an unlovely thing. Stepan Bandera collaborated with Nazi Germany and its invading armies in the name of the Ukrainian nation and his fascist militias participated in the massacre of Polish civilians and Jews in Ukraine. Given the devastation wrought by Hitler’s invasion of the Soviet Union, it is understandable that Russia is outraged by modern Ukrainian governments memorializing Bandera as a Hero of Ukraine. The recent integration of an explicitly fascist militia like the Azov battalion into the Ukrainian armed forces doesn’t help Ukraine’s cause.

But Putin’s designs on Ukraine have very little to do with the influence of the extremist Right in that country. Putin wants Ukraine partly because he wants a buffer state between Russia and the threat of NATO encroachment and partly because he believes Ukraine is historically a part of the Russian empire. The Russian Federation’s national identity under Putin has defaulted to its Czarist past. Russian identity was, paradoxically, both hegemonic and suppressed through the life of the Soviet Union. Benedict Anderson tells us that nations are imagined communities whose citizens learn to identify with their State and their fellow citizens, and where political legitimacy comes to depend on the invocation of popular consent. The citizens and leaders of the post-Soviet Russian Federation didn’t have the time to dream up a communion of their own; they defaulted, instead, to the Russian imperium of their Czarist past.

As an Indian, whose national identity is defined in part by subcontinental borders inherited from an empire, one way of understanding the struggle for Ukraine is to see it as a contest between two transnational entities, the Russian Federation on the one side and the European Union on the other.

To look at the 27 nations that constitute the EU from Delhi is to see a strange confederal avatar of India: a multi-lingual behemoth housed in a peninsular extension of the Asian land mass, just as India is. The crucial difference is that the EU is a confederation of sovereign nations built from the bottom up on the foundation of an economic union. The EU has any number of defects: it has a currency union without a fiscal union, it is dominated by Germany and France, it has federal ambitions without the democratic federal structures to match them and its rhetoric about shared European values is constantly shown up by the unreconstructed chauvinism of member states like Poland and Hungary. But the reason why it has grown is that it offers the promise of uncoerced membership of a relatively prosperous multi-national community. Even Britain’s tortured but peaceful departure can be read as a tribute to the extraordinary suppleness of this experimental union.

To look at Russia is to see a revanchist nation that has inherited both its power and its identity from not one but two dead empires. Where the EU has to put nations on hold while it processes their applications to join, Putin’s Russia has spent the 21st century trying to hold on to nations that have left.
Russia has no model of inclusion except Putin’s invocations of historical ownership. As a political home, it’s a dead end, a small nation in a big body, a runt with a rocket launcher. It’s hard to believe that even the Russian-speaking regions of east Ukraine would, given a choice, choose a Russian fatherland over the EU’s more temperate embrace.

The real tragedy here is Europe’s total failure to detach its military security from NATO’s dead hand. A European Union that fended militarily for itself, whose strategic intentions could be distinguished from those of the United States of America, whose expansion eastwards mightn’t necessarily have been read by Russia as transatlantic, Western encroachment, might have been a better, less provocative, godmother to Ukraine than an obsolete Cold War alliance that should have died with the Soviet Union.