The US President's visit, in its booming emptiness, shows that the Indian PM's grasp of symbols is inadequate 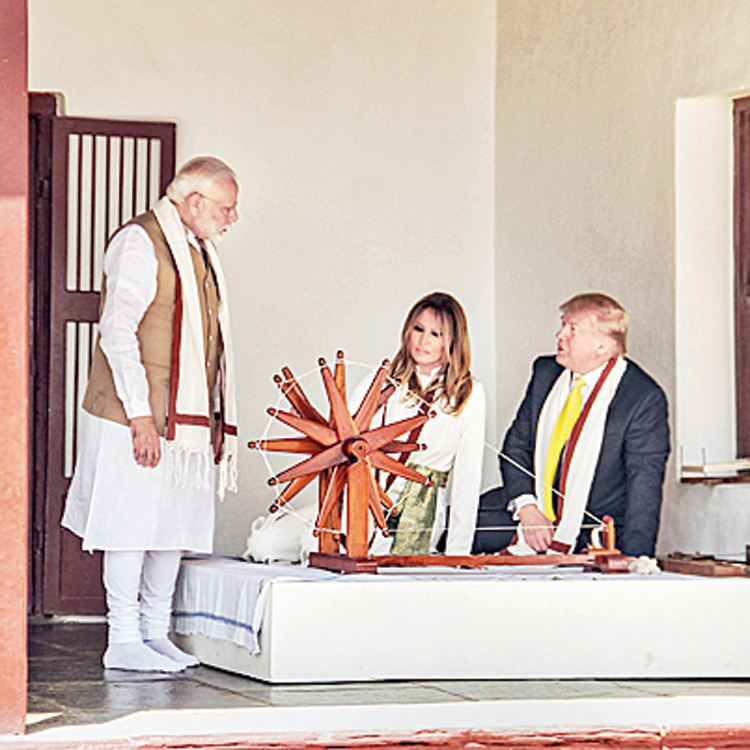 The symbolic power of a regime is a test of its durability. Unfortunately, symbols are too often the domain of the mass media in today’s society. It is a strange world where the media define the stage, set the stage and then set out the rites of performance. The Modi-Trump encounter is seen as a trendsetting victory for the two leaders, a victory of populism in both countries. The visit creates its brilliant mix of nostalgia and populism, a tremendous sense of the spectacle which makes the consumer feel an awe for politics. The media seem to be suggesting that Donald Trump and Narendra Modi tower over all figures like Sardar Patel’s statue, which is an ode to his role in history. While joining the celebration of triumph and solidarity, the sociologist, for one, feels a sense of scepticism. Is this narrative really true? Does it work or is this the media’s attempt to create a sense of hysteria as history around the visit?

Think of Modi first. Modi is the first Indian leader to be a complete media construct. He began his media life as a mask, graduated to a hologram after playing the hoarding. He creates a new digital imprint every day. He may not be memorable but leaves behind a media footprint every day. The success of Modi cannot be evaluated in political or ideological or policy terms. His future pivots on his success as a media creation. One realizes Modi as a symbol is labour and capital intensive. He demands repeated effort to sustain himself. Modi, like other media creations, is subject to entropy. He can self-destruct with ease.

The power of Modi stems from his potency as a spectacle. Spectacles are not easy to create. They are no longer spontaneous outgrowths, religious or efflorescences but pieces of synthetic, symbolic manufacture. Without the media, both Modi and Trump would be symbolic dwarfs, caricatures of their current normalcy. Modi is clearly a symbolic costume ball, a Stakhanovite performance, rushing to Davos, pretending to woo the G-7, playing the Israeli double. He exaggerates his statesmanlike role by playing good cop to Amit Shah’s bad cop. He presents himself as hard working, a man holding a nation state together. It is clear that Modi and Trump need each other. Trump needs Modi to woo the NRI electorate, temper India’s demands and play out an international role which mutes the muddiness of the Congressional enquiry. The very dynamism portrays the image of a dedicated monastic being harassed by unemployed politicians. But once one slows down the pitch and the power of scale and watches him in slow motion, one realizes he has no real message.

M.K. Gandhi had a message, which surged in memory. He made us rethink and invent new paradigms. Modi is repeating old slogans. Gandhi could work at the levels of folk tale, myth and the unconscious. He ruled the everyday regimes of gossip. The myth of Gandhi still flows, one story cascading into another. One senses the inventiveness of his moral imagination. His symbolic power is effortless in combining the aesthetic and the ascetic. Next to him, Modi is a laborious construct, overdressed and overplayed. One’s interest drops as one watches repeated replays. He suddenly sounds like a TV serial demanding new life, fresh ideas, or a script that has some sense of context.

One witnessed this in an everyday sense as three events in Delhi suddenly cut him to symbolic size. The youth movement in Jamia showed that while Modi had mastered consumerist aspirations, he was dull on the plural power of citizenship. His patriotic-style dancing to security’s beat was empty before the drama of Shaheen Bagh whose folkloric power made the Modi roadshow sound empty. Thirdly, Modi’s brand of democracy had few takers before Arvind Kejriwal’s concrete sense of welfare. One senses that both symbolically and context-wise Modi appears to have lost his way. His message lacks a political verve, sounding more like an empty catechism of words.

The Modi-Trump jugalbandi does little to redeem the situation. It makes it clear that both leaders love body counts and count achievements in terms of the Guinness book of records. Yet the Modi-Trump display sounds like a replay, echoing more original breakthroughs. Suddenly, for all his sense of gargantuanism, Trump sounds like a replay of Carter. The presence of NRIs, pretending India is an extension of themselves, adds a certain arrogance. Trump attempts to play NRI while Modi plays aspiring American. The aspirational game is clear, but democracy dims in this display of hoardings. The attempt to extract human-interest stories invoking nostalgia or solidarity verges on an empty sentimentality. Somehow, Lyndon Johnson and Jimmy Carter provided better mnemonics. Gujarat serves as a double constituency being an extension of both Rutgers and Modi’s home constituency. Somehow, the very idiom of the event shrinks it to a local game. It is like watching a twinning of populisms that do not quite work together.

Yet, symbolic failures are difficult to understand. What seemed epic in character and quality for a decade suddenly stumbles into a spoof. The Modi-Trump attempt to play brothers under the skin/costume does not quite work. One would have preferred a Punch and Judy confrontation. It would have blended better into the current of North-South politics. Modi’s attempt to play a superpower equal does not work. The shadow of China haunts the spectacle, casting a bigger shadow. In a strange way, the Trump-Modi global roadshow is defeated twice. It is not convincing in terms of global politics as spectacle, or strategy. It is also defeated at a local level by the street theatre called Shaheen Bagh. Shaheen Bagh’s sheer spontaneity makes the Trump-Modi show look laboured. It survives better in terms of mnemonics. More importantly, it tells demagogues that people think differently, that marginals and minorities are not automatic hard hats but beings with compassion and cosmopolitanism, who offer an alternative imagination to the sheer jingoism of the nation state. The Muslim women standing witness as a satyagrahi erases the portrayal of the Muslim as proponent of the axis of evil. Shaheen Bagh as a narrative and mnemonic of oral memory survives the epidemic of photographs displayed to glamorize the Trump trip. Years ago, Joseph Stalin, in typical bully-boy rhetorical style, had asked, “How many battalions does the Pope have?” Stalin believed in raw power, the pageant of militarism like Trump and Modi. But Shaheen Bagh shows that the satyagrahis survive the Stalins of our time. Attempts to trigger violence to muddy the situation at the street level may not be so convincing.

The little theatres of politics actually reveal that nation state and media for all their resources do not understand the dynamics of symbols. A semiotic analysis of Modi as an arranger of spectacles shows that the Modi regime is becoming symbolically inadequate. Brand Modi may work in the short-run, especially when it competes with the current Opposition. But politics reveals today that people get tired of brands which in their display of arrogance reveal a superficial authenticity, a prefabricated rhetoric, which makes little sense of the changing events. Modi shamelessly and shamefacedly offered India as a spectacle for Trump. Yet, Modi forgot that the Indian unconscious has a way of delivering its own messages. India telegraphed that Sabarmati is where non-violence is. Trump-Modi reduced Sabarmati momentarily to a tourist site at the very moment Shaheen Bagh became a place of pilgrimage. A lot of it happened inadvertently but that logic added to its effectiveness. The Trump visit, in its booming emptiness, shows that Modi’s grasp of the symbol is inadequate. Whether he and his confused regime grasps this or not, only the future will tell.

The rising at Shaheen Bagh