Titli's trail of destruction in Odisha and AP 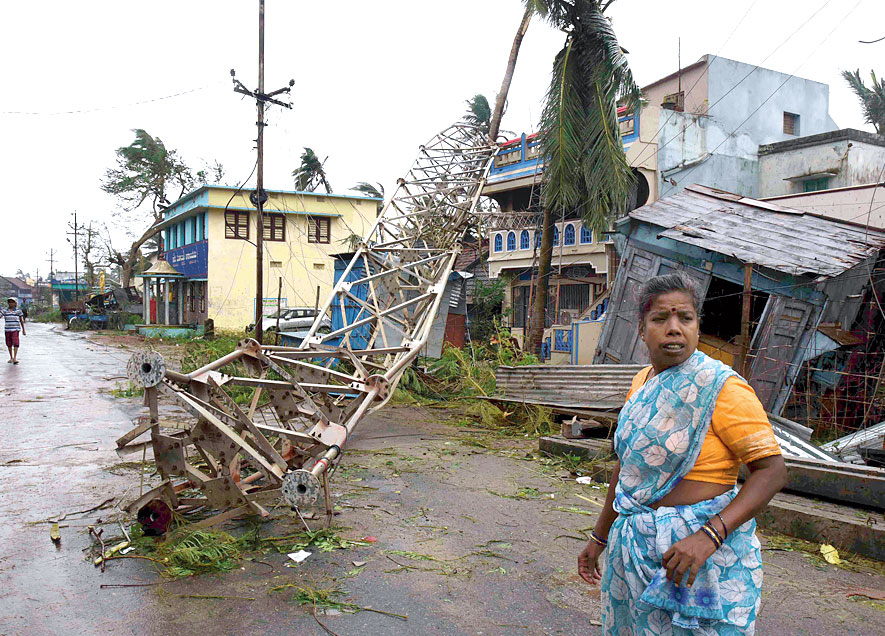 A woman stands next to a damaged communication tower after cyclone Titli hit in Srikakulam district
Reuters
The Telegraph   |   Published 18.10.18, 12:34 AM

Sir — Cyclone Titli, which clocked wind speed up to 165 kilometre per hour, left behind a trail of destruction in parts of coastal Andhra Pradesh and Odisha. Over 20 people are dead owing to the cyclone and the subsequent floods in Odisha alone. Titli also extensively disrupted power supply in the two states. The people are yet to recover fully from the effects of the tropical cyclone.

Given the situation, it is the responsibility of the Union government to provide any help that the two state governments might require.

Sir — It was quite distressing to learn that a primary school in Delhi segregated its students based on their religion (“Championing vegetarianism is discriminatory”, Oct 12). Sowing the seeds of division in young minds is a reprehensible act. Such steps can spell disaster for a pluralist nation like India. One wonders when will we truly realize the import of the old adage — ‘united we stand, divided we fall’. Society will not progress unless we shake off our prejudices. If only we treat another human being with respect and help them without bias, the world will be a much better place for everyone to live in.

Sir — The editorial, “Daily hate”, raised a pertinent issue. It has become important to ask why the founding principles of the republic, such as secularism, are increasingly being subverted under the current dispensation at the Centre. However, it is also true that even non-political, educated individuals are quick to judge a person based on his or her religion, race or community.

Ironically, our country has a long tradition of fostering communal harmony. Moreover, every Indian should have faith in the Constitution that guarantees liberty and equality to all. The citizens should join hands to rein in the evil forces that are promoting prejudice and parochialism in the country before it gets too late.

Sir — The news report, “IIT seer dies on Ganga fast” (Oct 12), and the accompanying picture were heart-wrenching. Swami Gyan Swaroop Sanand, whose original name was G.D. Agrawal, passed away at the age of 86 at the AIIMS, Rishikesh after a 111-day fast. He was demanding a halt to illegal sand mining activities on the Ganga riverbed and better efforts to clean the river. Sanand was not just a seer and an environmental activist but had also been a professor at the Indian Institute of Technology, Kanpur for 17 years.

Some ministers and representatives of the ruling Bharatiya Janata Party tried to dissuade Sanand from fasting, but they failed in their attempts. The BJP and the larger sangh parivar must realize that Sanand and his followers do not subscribe to any divisive ideology. Their concern at the deterioration of the water quality of the Ganga river is genuine and not part of a strategy to meet narrow political goals.

If the ruling party is concerned about the Ganga at all, it should accept every demand put forward by Sanand without any further delay. Otherwise, it should prepare itself to face the wrath of the public in the forthcoming Lok Sabha elections.

Sir — The death of Swami Gyan Swaroop Sanand is a matter of immense grief.

He was on an indefinite fast since June 22 this year demanding a clean Ganga. Sanand had been seeking the government’s intervention to nurse the river back to health, but the administration turned a deaf ear to his demands. Now, although Sanand is no more amongus, the government should not think that it will get any respite. The movement seeking a clean Ganga will continue until the demands are met.

Sir — The death of the seer, Swami Gyan Swaroop Sanand, should serve as an eye-opener to the indifferent Union government. Sanand had sought a law banning the construction of any new hydropower project on the Ganga and its tributaries. In spite of the rejuvenation of Ganga being a pet electoral theme of the BJP, nothing significant has happened in this regard since the saffron party came to power in the summer of 2014. It seems that the government dithered to accept Sanand’s demand, as it would then have had to put a stop to many ongoing projects.

The Centre should at least now review its policy and bring in a strong legislation to prevent any further damage to the river’s ecosystem.