Thousands join climate marches across America and the world 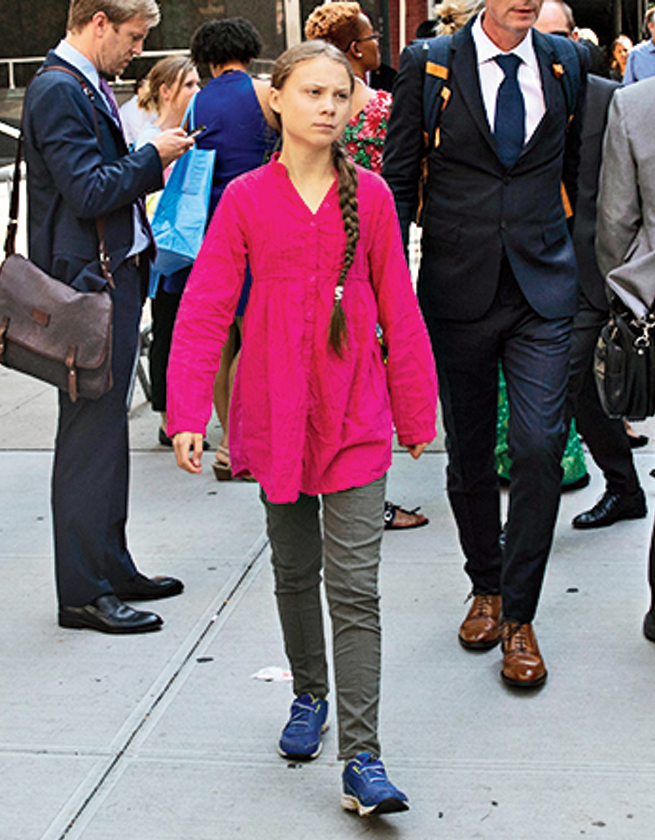 Thunberg arrived in New York City to give a speech to loud cheers at Battery Park. Hundreds of Amazon workers walked out of their offices in Seattle. Thousands joined in marches in NYC, Chicago, Denver and other cities across the United States of America.

In Los Angeles, the mayor, Eric Garcetti, thanked the hundreds of protesters for “supporting the Green New Deal, right here”. He had reportedly announced earlier that he would be setting up a youth council on climate action that would comprise 17 high school and college students. Some students walked out of school to take part in the event in spite of the Los Angeles Unified School District officials discouraging students from leaving campuses mid-day. The former housing secretary, Julián Castro, attended a march outside Linn-Mar High School in the Cedar Rapids area, and the former Congressman, Beto O’Rourke, joined the Denver climate march. Castro and O’Rourke — both Democratic presidential candidates — have released climate change proposals.

The new Downton Abbey feature film released on September 20. It was created after the highly popular television drama of the same name came to a close. Even though the series ended four years ago, the fans of the show cannot get enough of it. In Europe, there have been tours playing off the series alongside visits to the United Kingdom’s Highclere Castle which was the ‘Downton Abbey’ estate on the show.

People can also get their fill at Downton Abbey: The Exhibition. After an extended stint in NYC, and a stop in Florida, it is now in Boston until September 30. It then moves to the US’s largest private home, the Vanderbilt-owned Biltmore estate in Asheville, North Carolina, on November 8. And while LA tried to escape a heat wave, a Downton Abbey Grand High Tea Party was thrown in the city. The garden party was complete with staff and actors dressed in period attire and doling out high-tea treats. There were scones, biscuits and tea sandwiches, among other treats. One could even take part in a few of the Crawleys’ favourite Downton-estate pastimes, including croquet.

Moving offshore, Viking River Cruises in the US has organized a post-cruise, five-day extension based on the series. On the ‘Great Homes, Gardens & Gin’ extension, you can imagine the suited men of Downton Abbey while on your Highclere stop in Hampshire.

Over 140 people were crawling on the streets of New York on their bellies as fellow New Yorkers cheered them on. But this was not some sort of self-flagellation. It was a performance piece orchestrated by the multi-media artist, Pope.L. Known as Conquest, this performance is part of a series of crawls that Pope.L has undertaken over his 40-year-long career. To conduct it, the artist recruited participants who reflected the cultural and demographic diversity of NYC and agreed to “abandoning their physical privilege, embracing their vulnerability and expressing the power of collective expression”.

The participants, on their hands and knees, followed a 1.5-mile-long route that stretched from the Corporal John A Seravalli Playground in the West Village to the south steps of Union Square. The relay aspect of the crawl highlighted the interconnectedness of all people. The performance was meant to draw attention to power dynamics, privilege and cultural representation in the city. Moreover, each participant crawled with props, including a blindfold and flashlight. They was even a crawling with only one shoe, emphasizing each of their personal struggles. Pope.L will walked alongside, giving support where needed yet allowing the focus to remain on the power of the collective.

“We had to avoid the typical taste of a chai latte... and wanted to highlight the way it’s prepared back home with fresh ginger, cardamom and spices,” said the owner, Ayan. They hope to dispel the Westernized idea of ‘chai’ — a thickly sweet, milky tea latte doused in the flavour of cinnamon that barely resembles the actual roadside cha we are used to. The team is also trying to challenge the romanticized visions of India by creating a kind of place that is true to its roots. “Creating a depiction of chai that directly feeds into the ‘Western conception of the exotic, unknown, East’... doesn’t reflect our first-generation experience and seems like a shortcut to getting cheap Instagram love,” said the team on its website’s blog.

There is another crop of modern dating terms. First up is ‘benching’. In keeping with the sports reference, it means you have been benched or put on the sidelines until the other person wants you again. ‘Bread crumbing’ is what happens when someone throws ‘crumbs’ your way, such as random flirty text messages, in order to string you along. ‘Cushioning’ is when you keep a few potential suitors around to ‘cushion’ the blow in case your relationship doesn’t work out.