Democracy needs the therapeutics of care, concern and clarity 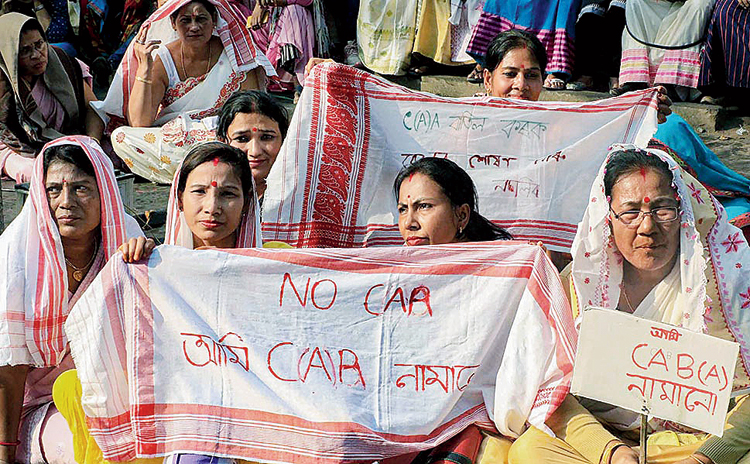 An activist noticed that the sadness increases when we realize that Assam becomes a pretext for ruining democracy
(PTI photo)
Shiv Visvanathan   |   Published 18.12.19, 07:00 PM

Sometimes the most innocent of conversations create a new depth of insight. I was talking to a group of professionals in Chennai who were experts in weaving, who could speak for hours on the sensuality of cloth. One of them, a young student, spoke about the nature of words, of how a protean possibility becomes a procrustean grid. She was talking of the word, ethnic. Ethnic to me is a sense of the self, it is second skin, an identity. Ethnicity is the world of colour and playfulness. Ethnicity allows self and other, giving it a multiplicity of ‘tints’. Then she switched lives and said, “You can freeze ethnic to mean the Other. The term, ethnic, others everything as in politics. Think of Amit Shah. He hates the word, ethnic. He thinks citizenship is a uniform, emptied of ethnicity. Citizenship and uniformity go together, while ethnicity is a conversation with the Other, face meeting face.” The group around her agreed, sensing they had made a deeper move from dyeing to politics. One of them added, “Assam haunts all of us today. What we do in Assam will determine us. The joy of ethnicity has turned into the tragedy of ethnic cleansing. Words have switched gestalts.”

I was moved by the conversation because it captured the tragedy of Assam. Today, I think it is time we assembled the common wisdom expressing the apprehensions around Assam, collecting bits from conversations I have had over the last few months.

I remember a sociologist friend of mine telling me this regime is classic Foucault — it dreams liberation and invents nightmare. It promises citizenship and transforms it into enclosure and Panopticon. It transforms the transparency of democracy into a surveillance State.

An academic, a student of violence, said, “India is, probably never was, a confident democracy. Our elite sees it as a growing weakness, creating the roots of a soft State. We envy Pakistan and China; we want to be a national security State like them. The Chinese have, no doubt, interned a million tribals. We suddenly want that machismo. If the Chinese can confine a million as an aspirational authoritarianism, we can intern four million.” Another added, “Think of the bureaucrats dreaming of the software for a national register getting a high from the technologies of control. One has to see the link between nation states and corporations dreaming control. One of the biggest beneficiaries of the Assam crisis will be IT firms. It is a Dostoevskian paradise. Dostoevsky said, give me a moment of freedom and I can sense the imminence of authoritarianism. Similarly, give me a sense of information and I can build a national security State around it.” Technocracies seem to make politics antiseptically evil.

A philosopher added, “Language, classification and tyranny go together. When you classify, you cage. Identity gives way to identification. Citizenship is no longer a belonging, a dwelling, a lifeworld in the Heideggerian sense. It becomes a cage, a label, a form of certification. It destroys identity to identify you. Citizenship becomes a flat land; a uniform you wear than a form of being. The Indian regime creates the most colourless forms of citizenship.”

Another added, “We are the real mimics of authoritarian Israel. The CAA does to Muslims and Bangladeshis what the Israelis did to Palestine. The Holocaust is no longer Nazi. The irony is, it is used and reinvented by the Israelis. It is one of the ironies of history. We want to repeat a genocide by creating the new gulags of Partition. The sadness is we have neither a Gandhi nor a Solzhenitsyn to combat it!”

A psychologist associate of mine wrote to me that the illiteracy of political theory haunts our regime. Shah and Modi might think they are the Jefferson and de Tocqueville of this regime, but they are not enlightenment thinkers linking nationality and freedom. They are bureaucrats creating new forms of order to minimize liberty. They are obsessed with law and order. This leads to security, not justice. NRC and CAA become two violations of democracy.

An activist noticed that the sadness increases when we realize that Assam becomes a pretext for ruining democracy. Now we can hardly appeal to the Supreme Court or to Parliament. The parties and their ideologies are supreme, and their hegemony defines the politics of the future.

While collecting this ethnography of observations, I realized that Assam was no longer a localized problem, a distant event at the frontier. Assam had quietly become a model for how middle-class India thinks. Delhi and Guwahati had merged in a way Kashmir and Delhi had not. Two students of mine who had studied public policy also added interesting observations. One noted that Assam had created a new politics of anxiety. Hindus felt intact in their identities but minorities, especially Muslims and even Christians, felt that minority and margin carried the sense of stigma and the perpetual promise of segregation with them. The brutality against protesters in the campuses and on the streets is a clear indication that this regime is merging minority, margin and dissent into a disposable category, erasing any claim to membership or citizenship. Diversity as a rhythm of citizenship is now alien. It is as if in creating a theocratic idea of citizenship by focusing around the idea of Hindu, the secular enlightenment idea of citizenship had been emasculated in the CAA. The activist claimed that the regime suffers from a failure of political theory by turning citizenship into a demographic study. The regime has created a dismal science of citizenship which no Malthus could match. The logic of bad theory eventually leads to genocide.

Her friend commented, “Watching Amit Shah and others on the CAA, I am reminded of a piece of Auden that you often quote in class; ‘Thou shalt not commit a social science, nor submit to questionnaire.’ The role of the social sciences in creating tyranny needs to be examined. The survey is not such an innocent act of information gathering. Gandhi and J.C. Kumarappa also conducted surveys. Yet their act never created the climate of threat and expulsion we face today.” The methodologies of social science have a hint of totalitarianism that we need to reflect on. Concepts linked unthinkingly to global methodologies can turn genocidal in the name of order. Law and order linked to surveys have become a frightening term in India. One needs an Indian Auden to challenge it.

A colleague of mine listening to these students provided a supplement. “It is the pollution of language, concepts and politics which has adulterated democracy. If the Congress bumbled its way into politics, the piety of the BJP is more lethal. If the Congress was confused, the certainties of the current regime need a hearing aid. It is as if the languages of pain, the vernaculars of suffering, are not able to dent the majoritarian mentality.” Assam becomes a symptom of a larger process of thought, a middle-class authoritarianism, which desperately needs to be psychoanalysed. This is more than, to use an inept word, an Israelification of India. My colleague had the last word; “Assam is a violation of constitutional morality. It has defiled the sanctity, the hospitality around terms like nation, citizenship, identity. Ethnic cleansing begins by polluting words which democracy heeds sacrosanct.”

Listening to the various viewpoints, one senses two things. One, Assam is no longer an Assamese problem and, two, it has become a test case for democracy, as critical as Kashmir or the AFSPA. There is a desperate need for dialogue, critique and concern. Indians must care for each other to nurture democracy. Democracy desperately needs the therapeutics of care, concern and clarity. The symptoms of disaster loom large today.