The present generation is leaving behind a broken planet 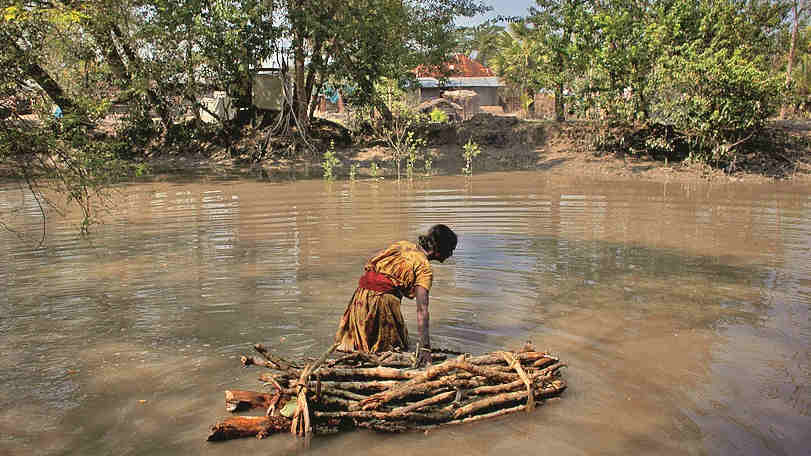 The United Nations’ Intergovernmental Panel on Climate Change has released a draft of the first volume of its Sixth Assessment Report. This report focuses exclusively on the latest scientific research on climate change. The next two volumes, due next year, will focus on the human impact and how societies can adapt to irreversible changes and, finally, on how to mitigate future global warming. This periodic set of reports puts together the latest developments in evidence available, knowledge inferred, and options open to humankind to save the planet from irreparable damage. The report is a joint effort by 234 scientists and other experts from 195 countries based on 14,000 scientific papers. Every time new results are published by the IPCC, the data and conclusions drawn from them look worse and more perilous. The last four decades have witnessed a continuous rise in average temperatures of the earth’s surface. Carbon dioxide and other greenhouse gas emissions have continued to increase. There are protests and debates and conferences by the dozens; yet nothing very concrete and enforceable is being done globally to tackle, what scientists are now referring to as, a climate emergency. The latest Assessment Report carries strong language that scientists normally refrain from using: so instead of claiming things with “moderate confidence”, the report has used words like “unequivocally true”. The UN has described the situation as a “code red” level of danger.

There are two aspects of climate change that are important to understand and keep in mind. The first is that it is part of an even bigger problem of environmental degradation and destruction. The second is that since the natural environment is a shared resource for all inhabitants of the planet, it constitutes a global problem which requires global solutions. Hence, knowing the extent of the problem and acting collectively towards a solution are of the essence. According to the Sixth Assessment Report, the carbon dioxide concentration in the atmosphere is now at the highest level in at least two million years. The sea level has been rising at the fastest rate in at least 3,000 years. The Arctic sea ice area is the lowest in at least 1,000 years. Glaciers have been retreating at an unprecedented speed not seen in at least 2,000 years. These time scales are not hyperboles; they are based on  the latest scientific methods and models of estimation. It is indisputable that the activities of human beings are the root cause of extreme climate events, including heavy rainfalls, severe droughts, intense heat waves and massive wildfires. The oceans have been warming too. Since carbon dioxide is soluble in water, the seas are becoming more acidic and losing oxygen content. Clearly, not only are human beings at risk of being adversely affected, all forms of life on land, air and in the water are threatened. According to biologists, we are going through the sixth mass extinction of biological species. The point to note is that the earlier five took place before Homo sapiens ruled the earth. It is also estimated that the sixth one induced by human development is also the biggest known to biologists.

The Sixth Assessment Report has many new features to make the technical report more accessible to general readers. For instance, there is an interactive world atlas, which allows one to navigate to the area where one resides and see the extent of measured climate change, the extent of damage according to various parameters, and a peek into the near future. South Asia remains extremely vulnerable. Even within South Asia, the Sunderbans area off the Bay of Bengal is especially threatened. The water level is rising and within the next one or two decades this part of the world could get completely submerged. Imagine the economic distress that it would cause to millions of poor people and the political conflict it could engender as millions travel as environmental refugees, competing for scarce resources with equally poor people, say, for instance, in North Bengal, Jharkhand or Bihar. India, like many other parts of the world, will be vulnerable to compound extreme events rarely seen before with increased intensity, durations, frequency and spatial extents. For example, extreme heat waves could be observed simultaneously with unusual flooding. Or there could be bitter cold spells with prolonged droughts.

Although the problem appears to be complex and alarming, the solution, at least on paper, is patently obvious. Carbon dioxide emissions have to be reduced swiftly and decisively. Emissions have already gone beyond safety limits. However, despite many attempts at getting the global community of nations to reduce fossil-fuel use, success has not been attained. Some countries, like the rich nations, had contributed during the nineteenth and twentieth centuries large doses of carbon dioxide now hanging in the atmosphere. Relatively poorer countries, now beginning to aspire to the material development standards of Europe and North America — like China or India — are burning large amounts of fossil fuels to grow faster and attain higher material standards of living. China is the biggest polluter of carbon; India being a distant third. The second place goes to the United States of America. However, in terms of per capita emissions, the US is the largest with China a middling second (amongst these three nations) and India the last. India and China have claimed that the major burden of reduction of carbon emissions will have to be borne by the rich nations while other countries use more fossil fuels to catch up with them.

That is the position of the Global South. India’s environment minister has claimed, after the Sixth Assessment Report was published, that it vindicates India’s stand that climate change is mainly caused by the cumulative emissions of the rich nations. The minister pointed out that India’s cumulative and current emissions are low. The developed nations argue that it is the total amount of greenhouse gases in the atmosphere that matters, not per capita emissions. There is an ethical issue too. If India and China are allowed to pollute more as an opportunity to catch up, it might happen that 20 years from now some of the poorest countries of Africa start polluting much faster than they are doing now. The situation could get much worse. Would India and China then have the moral authority to request these countries to reduce pollution?

India’s real position is even more fragile than what the IPCC claims. India has comprehensive policies on paper but they are not implemented in most cases. The nation has been increasing its forest cover but decides to clear forests to mine diamonds; it has ambitious plans for expanding solar power usage but has enormously inefficient electricity infrastructure. Whatever might be the official rhetoric, when it comes to a crunch, the environment is always given short shrift when the alternative is commercial exploitation. There is a myopic vision of development, beginning with making large dams to paving wide highways; from extensive use of hydropower to mining in forest areas. Doublespeak and near-sightedness can be a lethal combination.

The Sixth Assessment Report is, arguably, one final warning about the urgency of appropriate global action. In not being able to change our lifestyles and consumption patterns, human beings will be behaving irresponsibly toward future generations, yet unborn, who cannot vote against us, or sue us in a court of law. Our generation may leave behind an environmentally broken planet for the future. If, indeed, we do so, it will not be on account of ignorance; rather it will be a matter of deliberate choice.