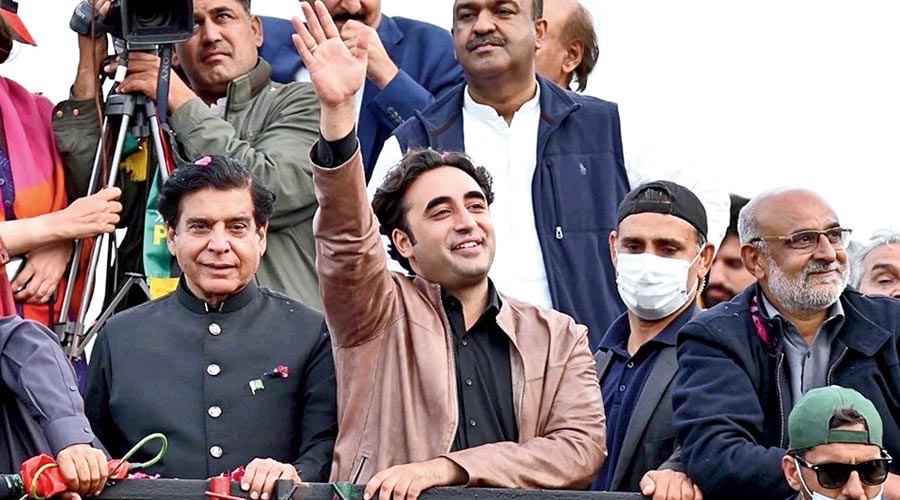 Bilawal Bhutto’s ‘Long March’ began in Karachi and terminated in Islamabad on March 7 with a call for a motion of no confidence against Prime Minister Imran Khan. The rest of the Opposition has rallied around, including the principal leader in exile, Nawaz Sharif. The pieces are, therefore, now in place for another political confrontation, perhaps even a crisis, in Pakistan.

Crises in Pakistan are not unusual. There was a major terrorist attack by the Islamic State on a Shia mosque in Peshawar recently, underlining that the organization’s capacity to strike on either side of the Durand Line is intact. The dire state of the economy has been a standard talking point for months. The uncertainties posed by the conflict in Ukraine and the wider implications of sanctions on Russia provide the  general context.

Perhaps a deeper worry, as yet largely unstated, relates to Afghanistan. The triumphalism of last year following the Taliban comeback in Kabul is now tempered by growing Western disinterest in Afghanistan and, consequently, tighter purse strings. Ukraine will be sucking out all the oxygen around in the foreseeable future. Deeply embedded in Pakistani political memory is a similar situation in the 1990s when the end of the Cold War meant US and Western indifference in Afghanistan just a few years after a decisive victory against the Soviet Union. Perhaps the apprehension now is that as a new Cold War sets in across the Atlantic and Europe, an older history will repeat itself again.

Yet, notwithstanding all this, Pakistan today is wholly absorbed in the political drama playing out over the future of the prime minister, Imran Khan. Although the motion of no confidence was tabled on the culmination of the Long March, the situation has been brewing for some time. There have been enough missteps by the government to galvanize the Opposition into coming together on the single-point agenda of bringing to an end Imran Khan’s incumbency as prime minister.

Much more is involved than the underperformance of Imran Khan’s government or his own mistakes. The key operative factor is the view that the military and, in particular, the Pakistan army would take of a serious attempt to dislodge Imran Khan. He is, after all, their chosen candidate and was the preferred instrument to wrest office from Nawaz Sharif and push his party into the Opposition. But over the course of 2021, as the Taliban clawed their way back to power in Kabul, a largely but not entirely silent civil-military drama had unfolded in Islamabad. Its outcome was not announced; indeed, it is not even categorical. But a considerable consensus among tea-leaf readers gravitated to the view that the protective cloak of the army that had so far enveloped Imran Khan was being pulled away. To his opponents, this was tantamount to the emperor having no clothes.

The army’s neutrality means a level playing field but it also amounts to a significant shift in Imran Khan’s political horoscope. His allies now appear just that less reliable and the disgruntled in his own party more demanding and recalcitrant.

In this background, Bilawal Bhutto’s Long March to Islamabad is an indication that the Pakistan Peoples Party is now convinced that a final push will bring down Imran Khan’s edifice. The rest of the Opposition concurs. A Long March is an oft-used device in a longer context of protest and conflict in Pakistan’s political culture. Its roots go back all the way to Zulfikar Ali Bhutto in 1970. It was used by Benazir Bhutto in the early 1990s as part of her protests against the then prime minister, Nawaz Sharif, and then again, with greater effect, in 2007 against the then president and military dictator, Pervez Musharraf. Nawaz Sharif was to employ the Long March against President Asif Ali Zardari in 2009. The term essentially means a long rally through a large swath of Pakistan to conclude in the capital — in brief, a show of street power and grassroots strength. As an instrument of protest to bring normal life to a standstill, there has, however, been a shift in gears in the concept of the Long March in 2014. This was when Imran Khan and the Canadian Barelvi preacher, Muhammad Tahir-ul-Qadri, joined hands against Nawaz Sharif with the army’s complicit support. The marchers then congregated in the heart of Islamabad, blocking roads with empty containers, and refused to move for some months. That was how Imran Khan emerged as ‘Container Khan’.

The vote on the no confidence motion is not confirmed but is likely to take place on March 28. As Imran Khan has raised the art of political protest in Pakistan to a new high (or, say his detractors, an all-time low), it is unlikely to be just a staid vote. A giant rally has been called by the ruling party on the day before the vote — a show of strength but also an implied threat to those party colleagues or allies who may be tempted to stray when it comes to the voting. The Opposition has also announced another Long March to culminate on the very same day at the same location. Clearly the stakes have been raised by both sides. In the meantime, invective and polemic ricochet of each other with no holds barred. Imran Khan has, in addition, assailed the United States of America, the West, and India and said that the Opposition is powerless against this troika.

The next few days will see a huge outpouring of political passion in Pakistan. Much speculation will also therefore devolve on the military’s role and whether its protective cloak will somehow descend again on the prime minister.  On a broader canvas, two issues stand out. First, a motion of no confidence against a sitting prime minister has never been successful. Usually, they have been removed by other tactics. If Imran Khan survives, that part of Pakistan’s history will repeat itself. Second, no prime minister has ever completed a full term. If Imran Khan falls, that history too will be repeating itself.

T.C.A Raghavan is a former Indian High Commissioner to Pakistan