The new acceptance of autonomous Muslim parties is welcome 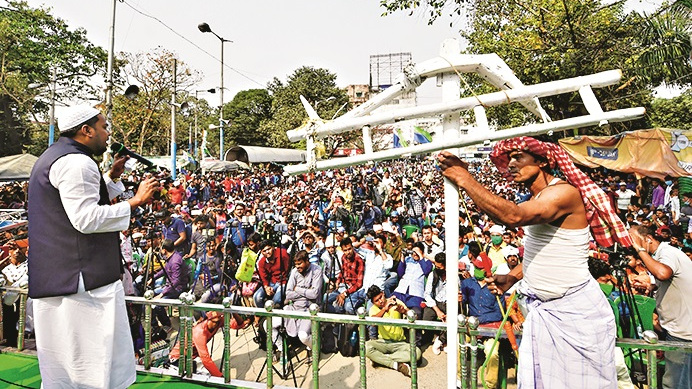 In three of the five states going for polls in the latest round of elections, a Muslim party would be contesting a large chunk of seats as part of a larger secular alliance. In Assam (the Congress-Left-AIUDF alliance) and West Bengal (the Congress-Left-ISF alliance), this represents an entirely new pattern of political configuration, while in Kerala (the Congress-IUML alliance) this is part of the long-established political norm. We are witnessing an interesting paradox of an unprecedented acceptance of autonomous Muslim political parties at the height of the Hindutva dominance of India.

What are the driving forces of the diverse Muslim political parties of India? At the outset, we can point to three fundamental political developments that have structured Muslim party politics over the last two decades.

One, the publication of the Sachar Committee report, which provided the political vocabulary for Muslim parties to launch an attack on their secular competitors. The damning picture of the social and economic backwardness of Muslims under secular regimes constructed the legitimating framework for the organizing of Muslims as a political bloc. It laid the rationale for a separate political identity that could be formed in the modern terms of social justice and derived itself from the constitutional promise of social and economic equality.

Two, the rise of Hindutva as the dominant political force in the country, and the concurrent decline in the political representation of Muslims. While Muslims are rarely, if ever, fielded by the Bharatiya Janata Party, even secular parties have cut down on their tickets to Muslims out of fear of Hindu consolidation. In the most recent instance, the Trinamul Congress has cut down its Muslim candidates by a third from 2016. Hindutva dominance has also created a shared consciousness of oppression among Muslims cutting across regional, caste, class and gender divides. This shared consciousness not just animated the nationwide anti-CAA movement  but has also helped a party like the AIMIM expand its national footprint, as was witnessed in Bihar and Gujarat. However, as the cold-blooded out-turfing of the AIMIM from the electoral arena of Bengal by the ISF has demonstrated, Muslim politics is still largely conducted through a regional idiom by state-based parties.

Three, the weakness of former dominant secular parties has pushed them into a more accommodationist stance with regard to autonomous political parties of the states. It would have been unthinkable a decade back to imagine the staunchly secular Left Front in alliance with a Muslim party in Bengal, or the Congress in Assam allying with the same AIUDF it ruthlessly attacked under Tarun Gogoi.

Within this analytically sprawling category of ‘Muslim parties’, we can draw out three distinct strands of Muslim politics, which can help us understand both the driving force of contemporary Muslim politics as well as gauge its possible future courses.

The first strand of Muslim politics is represented by the mainstream communitarian party which mobilizes on the provision of public goods by being part of the governing regime, exemplified by the Indian Union Muslim League. This form of Muslim politics has been facilitated by the consociationalism of the politics of Kerala, which integrates communitarian parties into two broad coalitions. The IUML has played a critical role in state politics since the formation of the state in 1956, being part of coalition governments of both the Left parties and the Congress. It has, in recent times, consistently won around twenty seats of the state legislature with the help of some additional support base of its allies. The resolute pragmatism of the IUML can be gauged from its stand on continuing with the Congress alliance in the heated post-Babri Masjid phase, despite facing an open rebellion by a faction which blamed the Congress for the demolition of the mosque. The appeal of the IUML thus depends on its bargaining power with the ruling alliance in providing Muslims with representation in all spheres of public life.

The second strand of Muslim politics is represented by the isolationist identity-based party which mobilizes in opposition to the existing political system. The All India United Democratic Front led by Badruddin Ajmal is a good example. The party arose in the aftermath of the Supreme Court order in 2005 overturning the Illegal Migrants (Determination by Tribunals) Act, 1983. The reversal of this instrument — which lent a layer of legal protection to Bengali Muslims — fuelled the anxieties of this community that the Congress could no longer protect them, either from the violence of Assamese ethno-nationalists or from the harassment of state officials. This type of party builds its popular base by attacking its secular competitor and weaning away their support base. In its first election in 2006, the AIUDF wrested ten Muslim-dominated assembly seats from the Congress.

However, there are limits to this exclusive identity-based mobilization. One, in the absence of coalition partners, the party is susceptible to reverse communal polarization of Hindu votes. The performance of the AIUDF in the 2016 assembly elections and the 2019 Lok Sabha elections showed a marked downward trajectory as the BJP ascended to pole position on the back of Hindu consolidation. Second, the AIUDF is unable to present itself as a viable party of government that can effectively bargain for public goods on behalf of its constituents. This is particularly important for Muslim-dominated areas of lower Assam which are marred by poverty, lack of educational facilities and under-development. The coalition with the Congress indicates that the AIUDF is attempting a transition from an isolationist identity-based mobilization to an IUML-like political bargaining-based mobilization.

The third strand of Muslim politics is represented by a new class of political parties which have emerged against the backdrop of the Sachar Committee report. These parties’ articulate Muslim identity in terms of socio-economic backwardness, allying with other backward groups, and moving beyond the issues of security and cultural recognition that formed the core of an earlier generation of Muslim parties. The Uttar Pradesh-based Peace Party of India is a quintessential exemplar of this politics, taking birth in 2008 just in the aftermath of the release of the Sachar report. It quickly established a base among the backward Ansari weavers of eastern UP, bagging four seats in the 2012 elections. Its surgeon founder, Mohammad Ayub, blasted secular parties for ignoring the material needs of Muslims since Independence, claiming that the Congress-led United Progressive Alliance “avoids even discussing the Justice Sachar Committee report”. Meanwhile, he accused the Samajwadi Party leader, Mulayam Singh, of mobilizing Muslims by giving “inflammatory speeches in favour of the Muslims” and provoking them into conflict. However, the eclipse of the Peace Party post 2014 exposes the vulnerability of such parties to extreme communal polarization. Recently, its leadership and support base in UP has been appropriated by the more strident AIMIM.

The newly formed Indian Secular Front can also be broadly seen as the lagged outcome of this post-Sachar mobilization. The publication of the Sachar Committee report had perhaps the greatest political ramifications in Bengal as it contributed to the decisive shift of the Muslim vote away from the Left Front to the TMC. Despite the careful nurturing of this Muslim vote by Mamata Banerjee, Bengali Muslims continue to lag behind in social and economic indicators compared to Muslims of other states. It is this opening that has been exploited by Pirzada Abbas Siddiqui, whose focal point of attack on the TMC government remains the socio-economic backwardness of Muslims. In order to underline its inclusive credentials of social justice, the ISF has given ten out of its 21 seats to backward-caste Hindus and adivasis.

The All India Majlis-e-Ittehadul Muslimeen, which generates the most headlines of any Muslim party, is a hybrid of all these three types of Muslim parties. In its home state of Telangana, it enters a bargaining alliance with the ruling Telangana Rashtra Samithi; in Parliament and other national forums, it predominantly employs a Sachar Committee-derived vocabulary of social justice; while in its election rallies in greenfield states it often falls back on hot-button identity-based issues to outflank competing secular parties. Being the only Muslim party to nurture national ambitions, it is extremely fleet-footed and aware of different political contexts.

The argument between secular and Muslim parties on the matter of who constitutes the true representatives of Muslim citizens has been encoded in the very foundation of our Republic. After all, the genesis of the Partition lay in the unrelenting refusal of the Congress to legitimize an increasingly separatist Muslim League as the voice and protector of the Muslims of British India. The Congress, notwithstanding its overwhelmingly Hindu leadership, never conceded on its cherished ideological principle of representing Indians of all religions and ethnicities. The newly-found acceptance of autonomous Muslim parties within an enlarged (and more nuanced) secular framework is thus a welcome signal of the maturing of our secular imagination. It couldn’t have come at a more urgent time.