Advertisement
Home / Opinion / The myth of war on terror

The myth of war on terror

US will always find itself vulnerable in its engagements with the Islamic world, its exit will hardly normalise Afghanistan 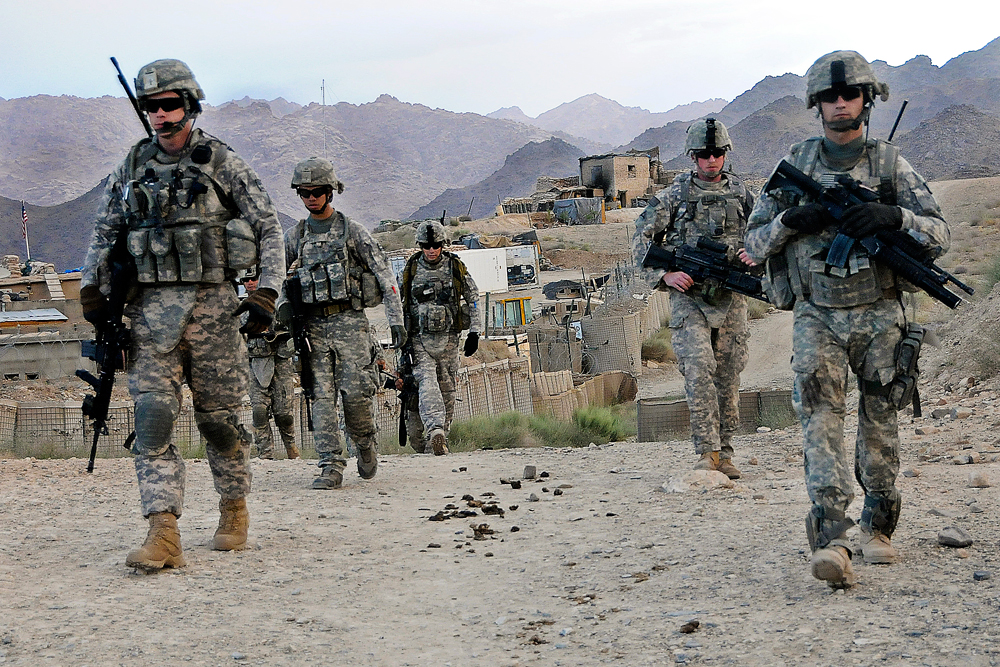 US soldiers at a remote Afghan base. The lessons of World War II and the Korean and Vietnam Wars were never applied to Afghanistan
(Wikimedia Commons)
N.V. Subramanian   |   Published 19.03.20, 08:43 PM

War should not be confused with counter-terrorism or with counter-insurgency. War needs definite and doable political objectives to succeed. Counter-terrorism and counter-insurgency themselves are political objectives; they cannot be classified as war. States frequently fail to make the distinction and land their militaries in a quagmire. The United States of America in Afghanistan has been a notorious example of this failure for 19 years.

Wars are directed against states. The 9/11 attacks were not Afghanistan’s war directed against the US. The Taliban government in Afghanistan gave refuge to Osama bin Laden in lieu of al Qaida funding its regime facing sanctions and international notoriety. Al Qaida’s presence in Afghanistan encouraged Middle Eastern states, charities and individuals to pour funds to be deployed against a common enemy, the US. Saudi Arabia and other Arab monarchies also kept the Taliban afloat as a hardline constituency to attract their own radicalized youth for peace at home. If Afghanistan was responsible for 9/11, Saudi Arabia, the United Arab Emirates and Pakistan, the only countries to recognize the Taliban regime, are also implicated.

A war cannot be launched to seek revenge. When revenge becomes the political objective, wars are reduced to a costly and bloody stalemate. This should be clear from a study of World War II. The Allies wanted Germany and Japan’s “unconditional surrender”. By then, the Soviet Union had become a threat to a post-war, liberal democratic future. The Allied demand strengthened Adolf Hitler’s hands. The Nazis who wanted rapprochement with the West found their ways barred. If the West had dithered, there was every likelihood that Joseph Stalin would have opened a door for the Nazis. The absence of ambiguity made the war winnable. Definite political objectives were set and met. Revenge is emotional. It rarely lasts. It wouldn’t have lasted the 2,174 days of World War II.

Compare this with the Vietnam War. Its tragedy has psychological roots in the Korean War. The US found itself surprised and challenged by the Korean War. Two communist giants (the USSR and the People’s Republic of China) and a small, but vicious, revanchist communist state (North Korea) suddenly came to threaten its post-World War II superpower status. In the absence of a nuclear strike which was ruled out by two US presidents in the terrifying aftermath of Hiroshima and Nagasaki, gritty battles had to be fought against massed Chinese attacks but even the brilliant leadership of General Douglas MacArthur could not forestall the stalemate. The informal end of hostilities came only after Stalin died. You might say the war ended when the aggressors wanted it to end.

The French transferred their Vietnam interests to the US against this historical background. An anti-colonial struggle was transformed by the Cold War into an ideological conflict. Muddled thinking in Washington led to counter-insurgency becoming a political objective. It was bound to fail. The US expanded the war to Laos and Cambodia but the inevitable happened. War made sense if Vietnam had invaded Cambodia, as it did later, and balance had to be restored. North and South Vietnam were artificial constructs. A war to keep them divided or alter the nature of the government of the North was never going to succeed.

Sadly, the lessons of World War II and the Korean and Vietnam Wars were never applied to Afghanistan. Avenging 9/11 should not have been ‘dignified’ as war. Nine-eleven was terrorism. To prevent its repetition, counter-terrorism was necessary. Post-9/11 tightening of US homeland security achieved that for America in good measure.The invasion of Afghanistan in response to 9/11 is a grey area. While 9/11 was planned there by al Qaida and Osama bin Laden, the Taliban were probably only guilty as accessories. If their complicity was greater, the peace deal with the US is unthinkable. The question is this. If the Taliban are to be tolerated in power henceforth, why did it take 19 years to reach the settlement?

The problem lies in embellishing counter-terrorism as war. Counter-terrorism ended when al Qaida were evicted from Afghanistan. In invading Afghanistan, the US also overlooked the significance of 15 of the 19 9/11 attackers being of Saudi origin. The 9/11 plan originated in Afghanistan but the Saudi causation was never dealt with. Counter-terrorism in Afghanistan became an emotional ‘War against terror’ with questionable political objectives. This anomaly produced two entirely expected results. The US military got stuck in a quagmire. The more intractable the situation became, the greater became US exertions to justify its presence to the American people and to the Congress.

Leaving Afghanistan will hardly normalize Afghanistan. Nine-eleven has its roots in US policy in the Middle East. Without a resolution of the Palestinian question, encouragement of democracy in the region regardless of its pitfalls, nudging the Saudi rulers towards constitutional monarchy and ceasing the persecution of Iran, the US will always find itself vulnerable in its engagements with the Islamic world.