Advertisement
Home / Opinion / The long shadow of the Ottoman decline

The long shadow of the Ottoman decline 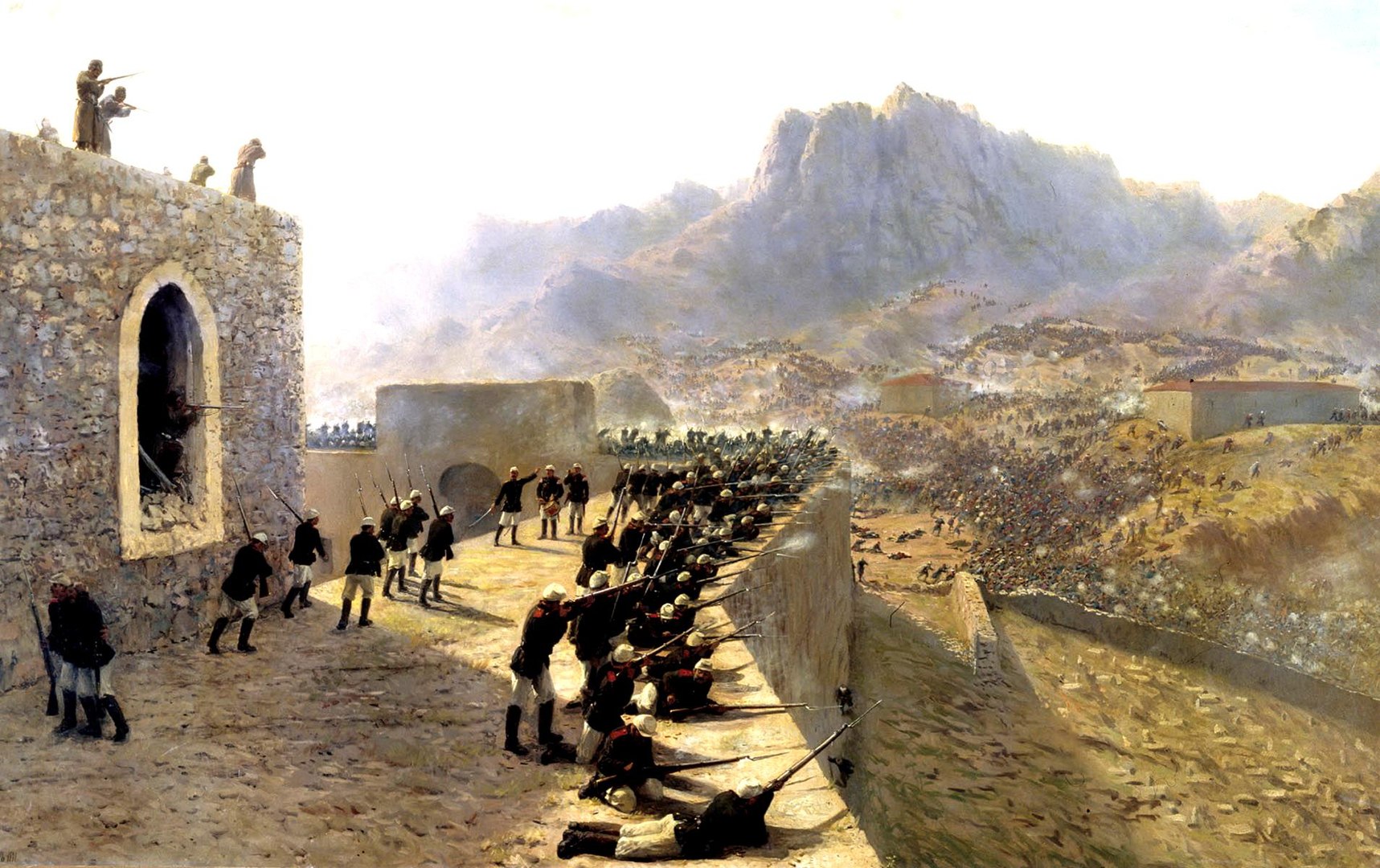 An 1891 oil painting by Lev Feliksovich Lagorio depicting Russian troops repulsing a Turkish assault against the fortress of Beyazid on June 8, 1877. In the early 20th century, Ottoman decline became the subject of a great deal of interest in India
(Image: Wikipedia)
T.C.A. Raghavan   |   Published 14.11.19, 09:40 PM

Turkey’s stand in favour of Pakistan on Jammu and Kashmir and Article 370 attracted much commentary in India. But Turkey has been in the news internationally for other reasons. These predate Kashmir considerably and relate to its past and current difficulties of addressing the aspirations of its ethnic minorities. The origins of these difficulties go back a century to the time when the multi-ethnic Ottoman empire collapsed in the late 19th and early 20th century and modern Turkey emerged.

In the second decade of the 20th century, Ottoman decline was also the subject of a great deal of interest in India. Many were then surprised — because this was the political mainstreaming of an issue far removed from India — at the Indian National Congress’s adoption of the Khilafat platform. The 1919 Khilafat movement had meant the forging of a joint front by the Congress with some Muslim leaders in an agitation to preserve the Ottoman Sultan and the Caliphate as the titular head of Muslim communities elsewhere. This strategy left many unconvinced. The historian, Jadunath Sarkar, replying to a query from his friend and fellow historian, G.S. Sardesai, wrote in 1921: “You are quite right in your view of the Khilafat question in Muhammadan India. The Sultan of Turkey was never recognized as the Khalif by any Muhammadan ruler of India, as every such ruler, according to the strict theory of Muhammadan Law, called himself the Khalif of the Age.”

Concern over the decline of the Ottomans, however, had deep roots amongst Islamic intellectuals in India and possibly this had much to do with Muslim self-perception of their own status in post-1857 north India. The Russo-Turkey war of the 1870s and the defeat in it of the Ottoman empire, therefore, was an element in the backdrop to Altaf Hussain Hali’s (1837-1914) celebrated poem, “Musaddas”, which had as its theme “The Flow and Ebb of Islam”.

Issues concerning the status of Kurdish and Armenian minorities had also emerged during the death throes of the Ottoman empire. Another important writer and thinker in India, Shibli Nomani, went to considerable lengths in the 1890s to defend the Turks against the charge of major pogroms against the Armenians within the Ottoman empire. Shibli was dead by the time an even more intense pogrom directed against the Armenians took place in 1915-16 in the midst of another Russia-Turkish conflict. If this was only one more front in the First World War, its consequences for the Armenians of Turkey were horrific. Accused of support to the Russians, the Armenians faced the full onslaught of a declining power that believed it was embarking on a policy of forced deportation and large-scale massacres out of military necessity for national defence. There are varying estimates of the death toll, but it was possibly well over a million. In some estimates, by the early 1920s in the Republic of Turkey only 10 per cent of the original Armenian population remained.

This was, by any standards, ethnic cleansing on a vast scale. It drew condemnation even then. A joint British, French and Russian demarche of 1915 was to use the term “crimes against humanity” to describe these events. The fact that these parties were then at war with the Ottomans does dent the credibility of this rhetoric. Nevertheless, this was the first ever use of this term and has, in the century that has elapsed, been accepted by many, barring of course the majority of Turks, as an accurate description of what transpired.

The Armenian question has never retreated since from discussions of 20th-century genocides. The dispersal of Turkey’s Armenian population in significant numbers to the United States of America and Europe meant the emergence of a diaspora deeply committed to preserving the memory of the wrong done to them. Individual acts of terrorism, especially against Turkish diplomats, thus also punctuated the chronology of the closing decades of the 20th century. Nevertheless, with Turkey being an important member of the Nato, Cold War realpolitik ruled and diasporic activism to secure acknowledgment of a genocide against Armenians gathered limited traction.

The breakup of the Soviet Union, the emergence from it of Armenia as a sovereign entity and the end of the Cold War provided new dimensions to the story. Alongside, Turkey, too was changing. With many believing that the country was on the threshold of membership of the EU, it too was prepared to acknowledge events of a century past to a greater extent than before. But this remained an acknowledgment well short of any use of the term ‘genocide’ against its Armenian population. In this narrative, what happened to the Armenians was the consequence of a larger conflict occasioned by a war in which Turks had also suffered. There were many Turks who dissented — including the Nobel laureate, Orhan Pamuk — and sought a more upfront acknowledgment. But confronting historical memory is not easy. Diplomatic efforts to bridge these gaps were made from time to time, yet the ‘G’ word proved a real impediment. The Armenian diaspora thus continued its activism especially in the US. Turkey and Armenia remained without diplomatic relations.

This unresolved contestation was inevitably destined to rise to the surface again. Last month, the US House of Representatives voted overwhelmingly to pass a bill recognizing the events of 1915 against the Armenians as genocide. How significant a change in US thinking this represents is illustrated by the fact that as recently as 2005, a US ambassador to Armenia was recalled and retired because he said “the Armenian genocide was the first genocide of the 20th century”.

Alongside the current resolution on the Armenian genocide, the US lower House also voted by a large majority on a bill imposing sanctions on Turkish officials over its military action against Kurdish forces in Syria. This was in part a response to Donald Trump’s announcement earlier in October of withdrawal of US forces from Syria, leaving the Kurds, hitherto its allies in the conflict against the Islamic State, in the lurch.

The complexities surrounding the Kurds are only another aspect of the fallout of the Ottoman decline. The civil war in Syria led to the real possibility of a Kurdish area of influence crystallizing around the border with Turkey. The US president’s decision to withdraw US forces stationed amongst the Kurds in Syria led to Turkish military action in Syria. Turkey, ever suspicious about Kurds in its own territory, saw a Kurdish controlled enclave in Syria as against its interest and having the potential of sparking similar demands within its territory.

The Turkish action against the Kurds may well have been a factor in tilting the political balance in the US and leading to the lower House terming the Armenian experience in 1915 a genocide. If this is a real, howsoever symbolic, victory for the diasporic Armenians in the US, it also reflects a wider geopolitical churn underway in the region. Politics in West Asia has evolved and alignments among Turkey, Russia and the US have shifted.

The Ottomans and Tsarist Russia were the dominant pre-modern dynasties in this region. A century earlier, both declined more or less simultaneously. That they are largely forgotten today is inevitable, yet it is surprising how many current geopolitical fault lines trace their origins back to the breakup of these older imperial entities. The issues confronting the Armenians — of acknowledgement of a genocide against them — and the Kurds — that they remain without political status — are inseparable from that history.

Kashmir effect on tourists to Turkey