The lethal half-life of toxic ideologies 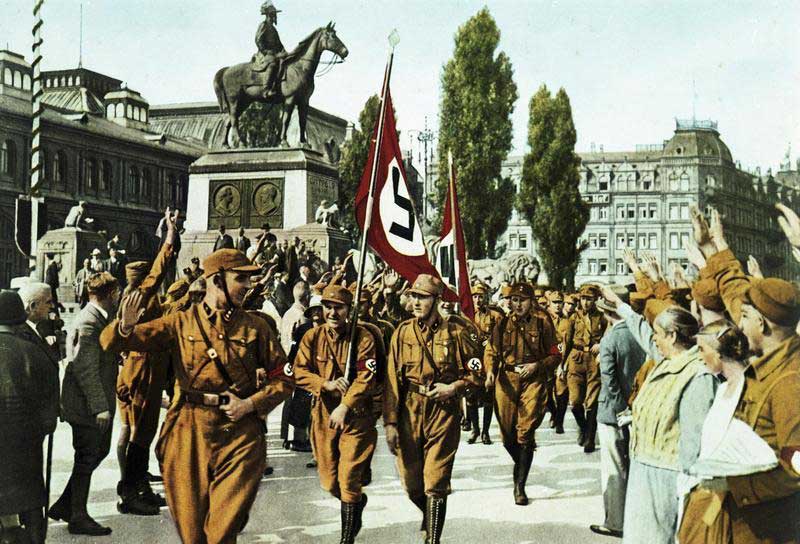 A parade of S.A. Stormtroopers, or 'brownshirts', in Nuremberg, Germany, 1929. The undoubtedly evil Nazis did not all die at the end of the war, nor were they all put in jail, nor did most of the ones in jail stay there for the rest of their lives
(Wikimedia Commons/German Federal Archive)
Ruchir Joshi   |     |   Published 30.04.19, 03:10 AM

Even if you become interested in history at a young age, you tend to view it in simple terms: so and so won, so and so lost, this war ended precisely on this date, that rule began at precisely that moment and so on. It takes a while before the weave of colours becomes more complex, before you can decipher the multiple, historical trompe l’oeil of a particular time or era. Growing up less than a couple of decades after the Second World War, the simple story of that conflict was first planted in my mind by English and American comics and films: the Nazis were evil people, the Japs were equally terrible, the Italians were nasty and cowardly; the French were ineffective and were defeated, the Soviets were poor and primitive; the Anglo-Americans were heroic, smart, handsome and won the war while, at the same time, helping the Russians to defeat the Germans. Visiting the Soviet Union as a pre-teen, I saw the simple narrative being inverted: the evil Nazis were the extreme example of capitalism, so extreme that the other great capitalist regimes were nearly destroyed by the Germans and the Japanese; but then the Germans made the mistake of attacking the Soviet Union and were defeated in the Great Patriotic War; the bravery, sacrifice and military brilliance of the Soviets thus saved the world from the abyss of global fascism.

It took a while to understand the deeper roots of the Second World War. There were colonialism and imperialism; there were racism and different kinds of nascent fascism in 19th-century Europe and the United States of America; there was widespread anti-semitism in no way confined to Germany — it was very much present in France, Russia, Poland and America to name just a few countries; there were the knock-on effects of the First World War (nary a mention in my growing-up years of the participation of lakhs of desi and African troops); there was the economic devastation of the Great Depression; there were the Nazi sympathizers at the highest levels of the British and American establishments.

It also took a while to get rid of the simplistic notion that when the war ended in 1945, all global conflict ended; that the good guys won and the bad guys were destroyed. The complex aftermath of the war continued to define our existence and is, in a sense, still unfolding 74 years after the fall of the Reichstag and the nuclear bombings of Hiroshima and Nagasaki. The Chinese war straddled the Second World War at both ends, starting in 1933 and ending only with the ascension of Mao in 1950. The undoubtedly evil Nazis who ruled Germany did not all die at the end of the war, nor were they all put in jail, nor did most of the ones in jail stay there for the rest of their lives. Many higher- ranking Nazis escaped through a ‘pipeline’ that led from Germany to Sweden to South America. Many were captured by the Allies and the Soviets and immediately put to use by their respective new masters in the Cold War that developed almost immediately after the 1939-45 conflict ended.

In 1945, Nazi Germany’s rocket programme was the most advanced in the world. Some of these scientists moved to America to help found the nuclear missile programme and Nasa; other German rocket specialists from the same programme found themselves working for Gamal Abdel Nasser in Egypt, trying to develop missiles to launch against Israel, while Israel itself, of course, developed missiles with help from the US. So, while Hitler himself died in 1945, was Hitlerism itself defeated? No. Just as his scientists provided technology to opposing warring sides, his models of fascism and dictatorship were used by both the Western powers and the Soviets all over the world.

Every regime or empire leaves a sting in the tail, even if the tail itself is dead. Likewise, many toxic ideologies have a lethal half-life way beyond the date by which they are supposed to have become extinct. Where did all the millions of Nazis go? Where did all the brutal, murderous divisions of Tojo’s Imperial Army go? Where did the hundreds of thousands who manned the huge Soviet security apparatus go? What happened to South Africa’s Apartheid apparatus? They didn’t go anywhere. Either they deftly exchanged bosses and continued what they had been doing or they were subsumed back into ‘normal’ society, their ideology now underground, many of their acts unpunished, un-atoned.

Closer home, we can ask the same question: what happened to all the Indira and Sanjay worshippers after the Emergency? Where did the CPI(M)’s harmad bahini go? And what about the bureaucrats? Like certain insects and rodents that survive devastating infernos, it is often the tainted bureaucrats who best manage to make the survival leap from the shore of one regime to another, a fact that is unlikely to change anytime soon.

At the halfway point of these elections, there are several possible outcomes. The thing to remember is that one mustn’t allow too much optimism to cloud the view. If the BJP-RSS hold on to power on their own, we are in for several more years of simply the most disastrous government that has befallen this Republic of ours. If they manage to stay in power, they will have no choice but to continue and expand their cruel, anti-Indian policies, because an allegedly sectarian mind cannot do course corrections that go against a one-point agenda. If the BJP-RSS have to go into a hostage-coalition with other parties, then we will still have Hindutva metastasizing all over. Its growth may slow, but with regionalist viruses being added. And if by chance we get a Mahagathbandhan government of some denomination, do not expect any sudden fountain-burst of secularism: everybody loves power and everybody notes what the competition has successfully pulled off previously to get into power or stay in power.

No matter which line-up of politicians takes the oath at Rashtrapati Bhavan in late May, if you care about certain things to do with this country — democracy, equality, human rights, freedom of speech, women’s rights, the right of Indian citizens to practise any religion they choose or none — if you care about climate change and the environmental meltdown we are already facing, then be prepared that this long, slow, clustered struggle is your lot for many coming years. There will be many setbacks that will ambush us from different corners, some predictable, some unexpected. Such victories as there are will be small, incremental, almost imperceptible, and we will need to be alert in order to spot them and tell them apart from false, superficial or fleeting triumphs.

History is a wicked jester. It dangles attractive simplifications before us. It offers to drape our shivering anxieties in patchwork capes of bright, broad colours. It teases us our desires with trinkets of easy understanding. It pushes us back into being the child that’s giving a history exam who grabs at dates and one-line answers memorized by rote. At a moment like this, a time of great crisis and jeopardy, we have to prove ourselves smarter, prove ourselves cleverer and more perseverant and with a much sharper memory than that bored, lazy, forgetful, know-nothing child.