Advertisement
Home / Opinion / The art of deceit: the BJP's before and after menus

We are being offered a retroactive menu that explains what we've eaten after the meal is over, even as we’re throwing up 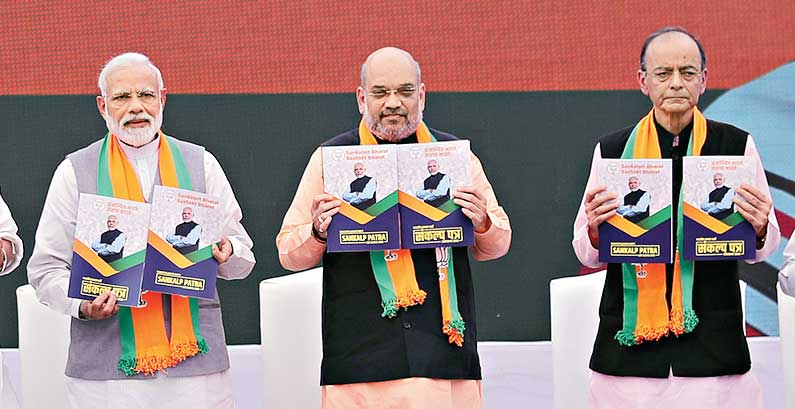 In the run up to the last Lok Sabha elections, the propagandists of the BJP-RSS began projecting a cluster of reasonably well thought out lies. The set menu these waiters of deceit proffered went like this: Narendra Modi is an honest, incorruptible man; Modi, new in the job, did his best to contain the anti-minority pogrom in Gujarat in 2002, but things ‘got a bit out of hand’; Modi did better with this Gujarat violence than the Congress did with the anti-Sikh mass murders of 1984, but a bent and biased media gave Modi an unfairly bad rap; Modi, honest and incorruptible as he is, then showed what he could really do by becoming the tough foreman under whom Gujarat Inc progressed in leaps and bounds; Modi may be a bit rough and uncouth in his manner, not great at speaking English, so not exactly to the taste of the snooty, Westernized, upper-middle class elite, but that is exactly his great plus point: what you see is what you get, and what you get is a no-nonsense ace-administrator who is indefatigable in pursuing his goals of economic progress.

The list of dishes about to be served continued: Lutyens’ Delhi aristos who stand to lose their corrupt hold on power are indulging in gross fear-mongering when they warn that Modi will aim for a quasi-dictatorship based on an agenda of Hindutva and oligarchic profit; Modi will do nothing of the sort, he will be a gruff, sleeves rolled-up administrator-in-chief under whom the government will become an efficient, non-corrupt, almost behind-the-scenes machine dedicated to the welfare of the people; all that will change is that the venal and corrupt Congress-led elite of Lutyens’ Delhi will be ejected from their long-held positions of privilege; all that will happen is ease of doing business will go up; all that will happen is that there will be a bias towards a robust, free-market economy which will provide a fillip to the masses so long held down under the yoke of Nehruvian socialism disguised as capitalism-lite; there will be no attacks on the minorities, don’t be silly, of course there won’t; there will be no attacks on the freedom of expression, what a crazy fantasy; Modi is coming, it will be good, relax and prepare to enjoy the good days.

Well, after five years we can remember the details of this fraudulent menu, even as we retch from the deliberate food-poisoning.

Leave aside everything else, the first indicators for me are my Gujarati businessmen acquaintances. For these people the only thing that really matters is the bottom line, and the economy in which that bottom line is ensconced and nourished. Being Gujarati, these friends are parsimonious about everything to do with business and the parsimony stretches to opinionizing as well. To be more accurate, there was no dearth of triumphalist celebration when the Modi-led BJP-RSS came into power in 2014. From last year, however, the tone has been different, the small concessions becoming ever more regular, ‘you were kind of right, this guy has not turned out to be what we hoped’, ‘I don’t like the Congress or anything but this guy has been a disaster’, the word demonetization doesn’t come up to often, but GST does, as do the economic figures, as do Raghuram Rajan and Urjit Patel, as does the fact that really only two business oligarchies have benefited under Namo-nepotism. Checking the grapevine in south Bombay it gets worse: the business community there is famously and ruthlessly unsentimental; they don’t care about minority lynchings or how humanities departments are being subverted by the BJP-RSS, but they do care about how India looks to the international business community from the Gulf to Wall Street; they do care about a stable society which produces jobs which, emphatically, is not India right now.

Next, the 2014 promises of the orange pom-poms about freedom of expression being protected and the continuation of a free media: leave aside for a moment the toxicity that spreads in our society from the proliferation of channels and newspapers that are nakedly publicity tools for the government, our media is now the laughing stock of the world because rarely has such sycophancy and twisted ‘reporting’ been seen in the TV and press of countries other than banana republics. One of the important things that differentiated us from our neighbours and China was our relatively free press and TV — over the last five years that reputation has been seriously damaged and this will have long-term repercussions. Rather than differentiate ourselves from Pakistan, say, or Myanmar, this ‘Ji-Ji and Jio Government’ has made us more and more similar to what the right-wingers like to label as ‘a failed state’.

As for the self-entitled elite in the Capital being replaced, the only real replacement of note has been the recent one of the two old denizens of Lutyens’ Delhi, a certain Mr L.K. Advani and one M.M. Joshi. Other than this, over the last five years a new elite has taken over the bungalows and the background levers of power, a new Hindutva elite which is engorged with both the old monetary corruptions as well as the strains of Agent Orange majoritarianism.

So then, which promised delicacies from the 2014 menu remain to be examined? Oh, the minor side-dishes, the Gujarat pogrom that would never ever be repeated, even though it never happened in the first place, the minorities who would thrive under the new vikas, the caste-oppression that would be done way with, the daughters who would be given a hand up, the environment that would be protected because, of course, for us Hindus nature is divine, the river (that is a deity with its own riverine rights) which would be cleansed. All lies, all deliberate, calculated lies, untruths that are now in tatters, falsehoods that every BJP-RSS candidate is desperate to slide into some hiding place out of sight.

What is now being dangled in front of us is the new, re-designed menu even though the kitchen is the same hellishly dirty cockpit, with the same nefarious cooks fanning the flames. But now, suddenly, the menu has changed its core nature. Instead of promising amazing, mouth-watering dishes, it is a retroactive card, a menu that explains what you have eaten after the meal is over, even as you’re bent over, throwing up the ‘meal’. So the extortion racket that lies at the heart of the gau-rakshak-murderers’ operations is termed ‘stray incidents’, the general and regular lynchings of people from Dalit and religious minority communities are shoved under the claim of ‘improved law and order’, the evisceration of various institutions of higher education is seen as ‘corrective measures against urban naxalism’, the wanton destruction of the unorganized sector through demonetization is touted as a great leap forward, the destabilization of our military’s response spectrum is seen as a great martial triumph.

It’s instructive to remember the patently false promises trotted out by the Agent Orange intellectuals and king-praisers five years ago. Many of us laughed out loud when we read them at the time, but many voters actually bought this snake-oil, this poisonous food. Likewise, the new retroactive menu with its post-facto false claims and definitions may actually fool enough voters to bring back this regime with however small or big a majority. However, if, like me, you are desperate for this Modi government to be terminated by the wheel of democracy you just have to hope that wide sections of the voting public find this second list of explanations and promises equally risible, equally dangerous to their best interests.