The flag must fly high

Ideas are vulnerable to corruption. Hence, the republic's fate rests on its ability to reclaim the Idea of India 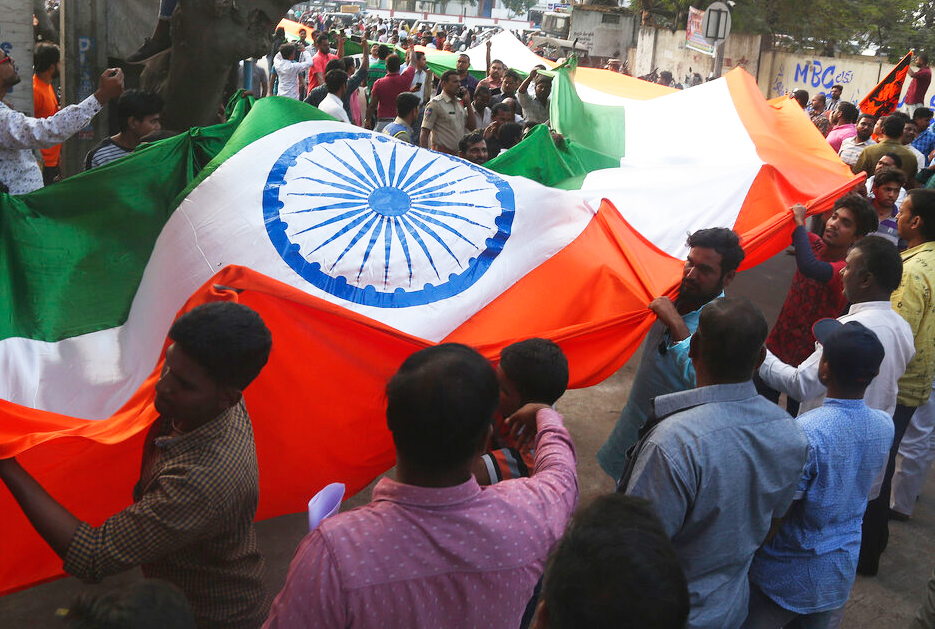 Supporters of Akhand Bharat Sangarsh Samithi carry a 75 meters long national flag during a rally supporting the implementation of the Citizenship Amendment Act in Hyderabad, Sunday, February 2, 2020.
(AP)
The Editorial Board   |     |   Published 07.02.20, 08:30 PM

Are symbols eternal? Emblems defy time because they represent ideas, and ideas, history has shown, can endure in spite of such adversaries as time and tyrants. Indeed, the march of human civilization has been predicated on the timelessness of all that is represented by ideas. The discussion on the deathlessness of ideas and, consequently, symbolism has been invigorated in present-day India, which has been a witness to spontaneous public protests across large swathes of the country against the Citizenship (Amendment) Act, which has sought to, in violation of constitutional imperatives, grant selective citizenship to specific constituencies on the basis of religious identity. Most of these demonstrations have been marked by the joyous display of symbols that are, in fact, codes for India’s pluralist ethic. Thus, the Tricolour, has been omnipresent at these sites of protest against a legislation that threatens the inclusive fabric of India. The national flag is, however, only one element in this inventory of bona fide nationalism. Texts signifying the original idea of the republic — the Constitution and its Preamble — and songs and poetry rich in pluralist symbolism — Rabindranath Tagore’s “Jana Gana Mana”, a shorter version of which is India’s national anthem, Muhammad Iqbal’s “Saare Jahan se Achha”, the verses of Faiz Ahmed Faiz’s “Hum Dekhenge” — have lent to this collective condemnation of a discriminatory law a degree of poignancy as well as potency.

The public invocation of the content of ideas is of immense importance. This is because while it is true that ideas are immortal, they are particularly vulnerable to erosion. In other words, ideas and symbols can be corrupted in the hands of regimes and New India, being built one brick at a time by the Bharatiya Janata Party, bears ample evidence of such a transgression. The body of an accused in a case of lynching was draped in the Tricolour after his death in police custody. A right-wing outfit also flew the national flag while taking out a march in support of a man accused of raping and killing an eight-year-old girl. These acts can no longer be seen in isolation. They represent the devious stratagem of bestowing honour and legitimacy to diverse violations of the body and the spirit of a nation which, at the hour of its birth, had pledged to remain equal. T.M. Krishna, an exponent of classical music, said recently that there is an urgent need to “recapture” the national anthem. The wisdom of this observation cannot be dismissed. A singular threat to the Idea of India is the the inversion of the idea itself at the hands of a vigorous, majoritarian force. Even the sanctity of the Constitution has been brought under a cloud. Shrill nationalism has succeeded — almost — in hammering the old, humane republic out of shape. The fightback against this manipulation must use ideas as weapons. But for that to take place, ideas and emblems advocating the republic’s original charter must be nursed back to health. Their healing would enable India to rid itself of the toxin of sectarianism.