The government has become a spur to disruption and chaos 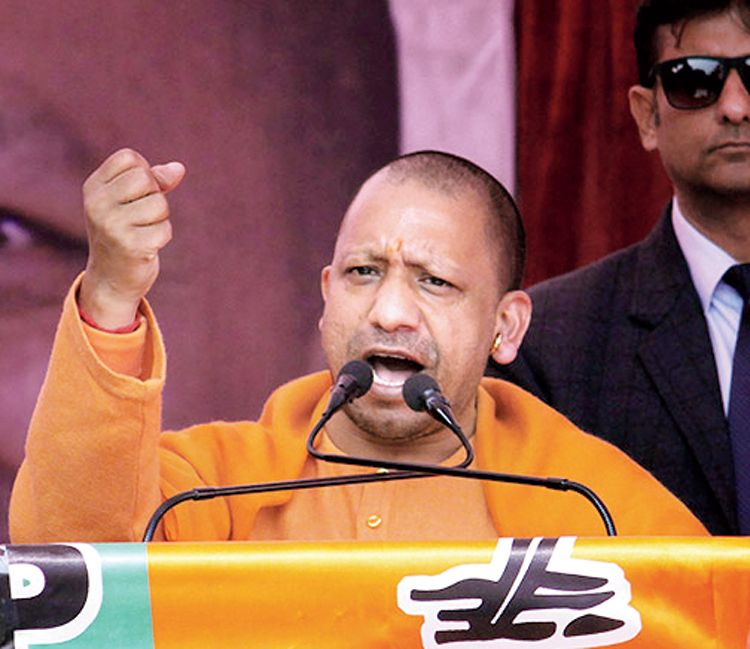 A fair lot has happened in the six months since India’s crown was sundered, downgraded and hammered into a prison-house sans parallel. Today is six months since the hobnailed silencing of Jammu and Kashmir. That silence has since flown the imposed suffocations of the Valley and become an uproar ringing across the nation: Aazaadi! It’s not a cry seeking secession, it is a cry seeking riddance of what is palpably cold and hard-hearted. Like tiny tots in a school being hectored in and out of police interrogation rooms by a State that has skewered them on the needle of sedition. Or grandmothers out shivering on a justice picket jabbed with daily insult and invective. Like a young scholar bashed to bleeding by a mob, then handed a ticket for violence. Like a pacifist shot at close range by a fanatic, then told his oozing blood was pretence: tomato juice. That cry echoing all around is a denunciation of such prejudice and excess and an assertion of what’s rightful. It’s a cry provoked by the agonies of calculated intimidation under the triple-antigen of CAA-NPR-NRC. It’s a cry bemoaning the fundamentals of this nation being thrown to the bonfires. It’s a cry leaping off the Preamble to the Constitution, it is being fanned by the Tricolour. It refuses to die because it is sought to be killed. The nation has these past six months been subjected to recurrent ugly whiffs of the Kashmiri condition.

Never has a government, the custodian entity of the nation, turned so menacing and merciless on its people. It has turned into a bully State that will gleefully torment and torture. Its chief actors are dog-whistlers and gas-lighters, they are inspiring marauders — a lone-wolf here, a choleric mob there — to medieval ways of settling medieval scores. Let there be little doubt about this: a government recently and resoundingly entrusted with the safekeeping of the national contract is actively tearing it to shreds. It has become a spur to disruption and chaos. It has tossed away sanity as a thing of repugnance. Notice the number of pleas and petitions written out these past weeks piled up discarded in the bin. Read through the list of signatories — teachers, writers, poets, artists, jurists, diplomats, bureaucrats, scientists, historians, economists, some of the finest observers and interpreters of society, the learned and the educated.

But education is ‘elite’ and therefore effete. Education isn’t what we need, what we need is eradication. “When you decide to paint your house anew, the first thing you do is scratch out the walls and cast the old away.” That was the prime minister, Narendra Modi, at an election rally in Delhi this week. It’s the kind of diabolical metaphor that Modi excels in. It is also, on the evidence of what has transpired since 2013, spectacularly effective; it has caught the populace in a reckless hypnosis. It is a hypnosis that will readily prompt a delirious scratching of the house walls in the quest of the new one Modiji has promised. That hypnosis is the womb of the “goli maaro saalon ko...” clamour. That hypnosis is what twists young men like Rambhakt Gopal and Kapil Gujjar to fits of violent lunacy.

In Modi’s house of hypnosis, it no longer sounds odd or objectionable that the prime minister demonizes a whole section of people, India’s largest minority, by calling them out for what they wear and how they look. It appears only normal for Amit Shah, the home minister of the country, to refer to opponents of his divisive project as termites, or rodents and reptiles. It has also become a thing of applause that he prescribes electrocution of the adversarial electorate. It is just fine that Anurag Thakur whips up frenzies of “goli maaro saalon ko...” from the election stage, then preens up with slicked hair and crisp jacket and assumes the chair as junior finance minister for an explanation of the Union budget — schizophrenia personified, you couldn’t connect one Anurag Thakur with the other. Nor do these acts of hypnosis seem ever complete without the appearance on stage of Adityanath, the man who has turned India’s largest state into a blistered showcase of chauvinism.

When he was handed reins of Uttar Pradesh, it was clear Modi had brought the D word to Uttar Pradesh’s centre stage — not development, as he had promised, but divisiveness, as he had always threatened. Few can match the unwavering sectarian virulence Adityanath drags into the public discourse.

About the only institution Adityanath, aka Ajay Singh Bisht, originally from Garhwal, had ever presided over before becoming chief minister was Gorakhpur’s Gorakhnath Math. As mahant of the Math, he had become used to wielding unquestioned authority and expecting blind obeisance. Such, that he often brooked no restraint from the law and flagrantly violated it. Jailed once in 2007 for encouraging Hindutva rioters and flouting prohibitory orders, Adityanath has often not been ashamed to play outlaw. He hasn’t baulked at bringing peril to social peace. He has shared a stage with hate preachers and those that have made open exhorts to violence against minorities. Much of what Adityanath has to say from the public stage probably deserves no repetition because it is patently violative of constitutional values, the law and good sense. But for those that might seek a sense, social media sites store an abundance.

Adityanath has, in the past, compared Shah Rukh Khan to the JuD chief and terror patron, Hafiz Saeed. He had pejoratively labelled Kairana, a Muslim-dominated pocket in western Uttar Pradesh, as Kashmir, a “hub of anti-nationals”. He is the one who inspired the “love jihad” campaign a few years ago, blaming upon the minority community a civilizational conspiracy to gain ascendancy of numbers. Later, using “love jihad” as leitmotif, he played militant proselytiser, peppering the heartland with aggressive calls for a counterblast — “We must do the same with their girls, I will celebrate each one of their girls that comes into our homes, each one that becomes a Hindu and enhances our national pride!” Asked during the run for Uttar Pradesh if he believed India was for Hindus alone, he batted not an eyelid and said: “India and Hindus are two sides of the same coin. India belongs to Hindus, the time has now come for everyone to accept and follow this.”

When Adityanath is commissioned to come campaign for the Modi-Shah bid to grab Delhi from the Aam Aadmi Party, his opening gambit is: “Boli se nahin maanega to goli se to maan hi jaayega... (If they will not be persuaded by words, they will be persuaded by bullets...)”

But if it can be unembarrassed about its bigotry, the Modi cast is capable of an unashamed vulgarity as well. When photographs emerged recently of a robustly bearded Omar Abdullah serving incarceration in Kashmir, Giriraj Singh, another eminence in the Modi government, tweeted: “We have abolished Article 370, not razor blades.” The Tamil Nadu chapter of Modi’s party, perhaps on cue, couriered to Abdullah’s address a whole set. It’s those razors whose edge they’ve put this nation on.

The shadows that dropped on Kashmir six months ago have only just begun to darken.

The sacred vision of our Constitution