The BJP needs a robust agenda to address local concerns

Unless its national vision is complemented by such an agenda, the party is bound to experience slippages 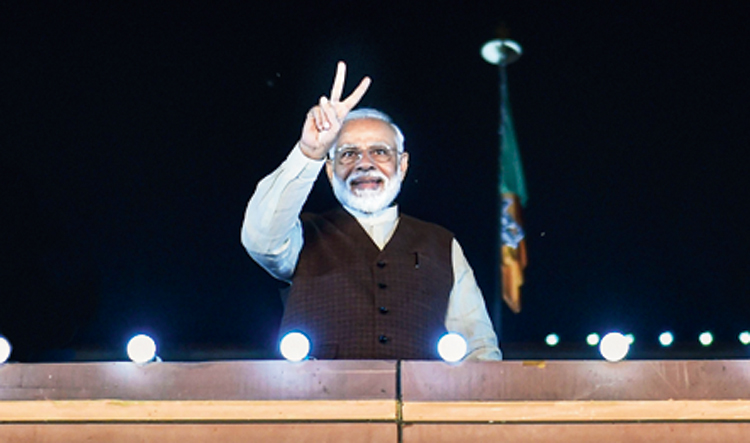 Prime Minister Narendra Modi arrives to address his supporters after his party's victory in both Haryana and Maharashtra Assembly polls, at the BJP headquarters in New Delhi on Thursday, October 24, 2019.
(PTI)
Swapan Dasgupta   |     |   Published 30.10.19, 07:27 PM

It is a measure of the fractious times we live in that even something relatively straightforward as an election outcome prompts sharply divergent interpretations. Some of this is inescapable. After the results were declared, it was perfectly legitimate for pundits to ask whether the glass of the dominant party — in this case, the Bharatiya Janata Party — was half-full or half-empty.

Credible arguments were possible from both perspectives. In the evening rally at the BJP’s huge central office in Delhi, both Prime Minister Narendra Modi and the party president, Amit Shah, flashed V signs and spoke about improved vote shares in the two states hitherto not considered traditional strongholds of the party. That the BJP and its ally, the Shiv Sena, had secured a re-endorsement was clear. In Haryana, where the popular vote for the party rose, it was a small step away from securing a majority. While this suggested quite emphatically that the vote for the Lok Sabha isn’t automatically carried over into assembly elections, it also indicated that the BJP had consolidated its presence in a state where its tally of MLAs seldom reached double figures prior to 2014. True, the total polarization of the non-Jat vote the BJP had managed in 2014 and twinned with anti-incumbency against the Congress government of B.S. Hooda was less marked in 2019. At the same time, it was strong enough to secure its candidates victories in 40 of the 90 assembly seats.

Against this pat in the back for Devendra Fadnavis and Manohar Lal Khattar, there was a counter-narrative that suggested the political tide was turning. It was argued that the BJP had emerged from this round of assembly elections bruised. It was sufficiently clear that the attempts to demoralize the Congress and the Nationalist Congress Party through a series of high-profile defections had been counterproductive. Equally, the attempts to put national issues over local concerns had yielded mixed results. The opponents of the Modi government stressed that if only the Congress had put more of its heart into the fight, the outcome would have been seriously damaging to the BJP. In any case, the Opposition is certain to approach the forthcoming session of Parliament in a more aggressive mood having put its poor showing in the general elections behind it.

While both these contrasting narratives have their takers, there is a non-political input that has quite definitely shaped perceptions. The counting of votes on October 24 was preceded by a series of exit polls that — one exception apart — suggested that the BJP and its allies were heading for a landslide win in both Maharashtra and Haryana. These exit polls set the benchmark of expectations and when the BJP underperformed in relation to the exit polls, the media had a field day rubbishing its lofty pretensions. That some of the media outpouring stemmed from its own loss of face over the flawed exit polls is irrelevant. What matters is that the BJP has been brought down a few notches from the heights it had climbed after Modi’s re-election. All eyes will now be on December’s assembly election in Jharkhand. A poor or indifferent BJP performance will have an impact on the party’s standing nationally.

Viewed dispassionately and regardless of some of the dodgy new entrants into the party, the most significant political contribution of the BJP both at the level of the Centre and the states has been its ability to provide largely non-corrupt administrations. It is this ability to look beyond personal aggrandizement and manage its welfare programmes efficiently and without leakages that has facilitated the loyalty of voters and transformed it into the dominant party, overtaking the Congress. When this has been blended into the party’s nationalist narrative — such as over terrorism, Pakistan and the abrogation of Article 370 in Jammu and Kashmir — the effects have been electorally devastating. Where this narrative has been undermined, it is due to either economic distress — drought and floods are often the trigger — or some deficiencies at the local level. The economic downturn — some call it widespread joblessness and the collapse of consumer demand — that economists suggest is bringing the country down has, as yet, not had direct political consequences.

Before the assembly election results, the critics of Modi taunted him for his success in detaching livelihood concerns from the political discourse. In what amounted to an indictment of the people’s mentalities, they suggested that popular attention had become focussed on sectarian concerns. Although this line of argument has been peremptorily junked after the BJP failed to meet the exit poll targets, there is a grain of truth in this belief. Had the economic distress been as marked as the pundits suggest, the BJP’s performance would have been truly disastrous. It was not. Moreover, in the urban centres where the downturn should have had catastrophic consequences, the BJP performed remarkably well. Mumbai city stands out as an example, as does Pune and Gurugram.

What this suggests is not that the Opposition was guilty of dereliction of its political duties by not putting the economy on top of its attack agenda but that the economic crisis has still not dented the popular imagination. In any case, it has not been able to overwhelm the larger sense of relief over the decline in governmental corruption. If this holds true in Jharkhand, a state once notorious for corruption but where there has been no hint of scandals over the past five years, there will be an important lesson for the BJP in states such as West Bengal where it is aspiring to upstage entrenched regional parties.

However, at the same time, the BJP must take note of the defeat of many of its ministers in Maharashtra and Haryana. Select ministers often fall by the wayside even when their party wins. This is often due to the fact that constituents nurture exaggerated expectations from ministers and punish them electorally when confronted with disappointment. Presumably this may have happened, particularly in Haryana. However, it would be instructive for the BJP to take a closer look at this phenomenon and probe the extent to which perceived deficiencies in the personal behaviour of the ministers contributed to their defeats. Such an inquiry, apart from streamlining ticket distribution in Jharkhand, should also guide the conduct of the BJP in a place such as West Bengal where the rise from political obscurity to self-importance has happened in a remarkably short time.

Finally, the recent assembly elections suggest the need to create an appropriate mix of local and national concerns. The Opposition made some gains by highlighting local grievances, apart from invoking identity, but its gains were limited. Could the absence of a national narrative be a contributory factor? There are no definitive answers but again, keeping the 2021 West Bengal election in mind, there is an issue the BJP must address: to what extent can anti-incumbency alone suffice in propelling the Opposition to power?

The real strength of the BJP lies in its energetic national vision that marks Modi out from his predecessors. However, unless this is complemented by sufficiently robust agenda — including performance in places where it is the incumbent government — that addresses local concerns, the party is bound to experience slippages. As chief minister of Gujarat, it was Modi who managed the right balance between nationalist ideology and local aspirations. The BJP needs to resurrect that experience and more so now that the central leadership has endorsed the principle of strong regional leaders bolstering its national icon.

A difficult time for the economy