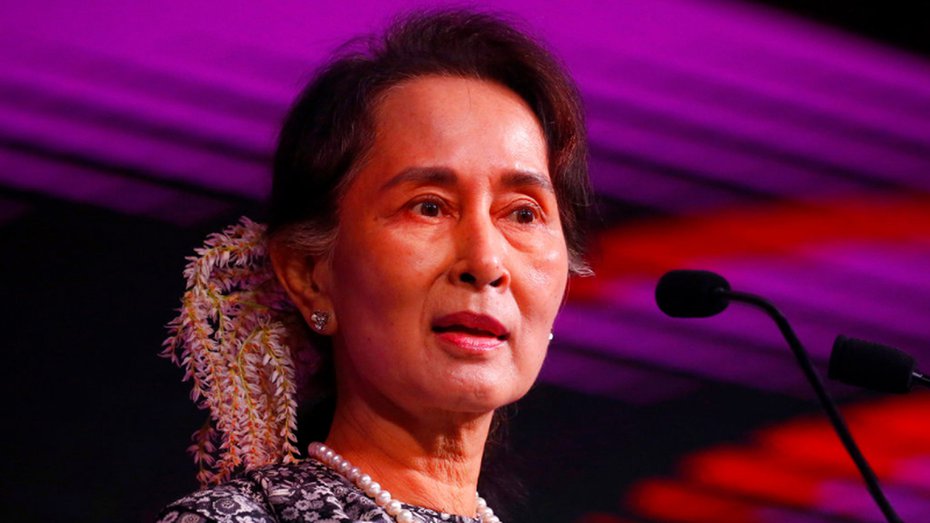 The Red Cross display in the mall graphically gave the lie to Suu Kyi’s claim that the Myanmar government had not engaged in any “armed clashes or clearance operations” targeting the Rohingya.
AP file photo
Sunanda K. Datta-Ray   |   Published 24.08.19, 04:04 AM

If Aung San Suu Kyi had been in London last week, a visit to the sprawling Westfield shopping mall in unfashionable Stratford might have reiterated for her the truism that England is indeed the home of lost causes. A trip to the other Westfield, the older and seemingly somewhat smaller mall in equally insalubrious Shepherd’s Bush, might have shown that hope, like love, still flourishes among the ruins.

Myanmar’s Nobel laureate State Counsellor, the equivalent of a prime minister, should at once have realized that both malls portray variants of the trauma suffered by Manchester United’s French-born, ethnic Guinean midfielder, Paul Pogba. The anti-racism body, Kick It Out, is currently investigating the racist abuse aimed at Pogba on social media. The Red Cross’s modest eight-day interactive exhibition in the Stratford Westfield depicted the plight of the darker-skinned Rohingyas whom Myanmar treats with the utmost cruelty. Gurinder Chadha’s film, Blinded by the Light, at the Shepherd’s Bush Westfield, shows how Javed, a young British-born Pakistani, triumphed over what used to be called the ‘colour bar’ in the British industrial town of Luton in the Eighties.

Neither Chadha nor the Red Cross explicitly mentioned this aspect of discrimination. But although it’s easy to see the film as an exuberant and sentimental offering to the legend and lyrics of Bruce Springsteen, it assures Britain’s six million South Asians at a time when racism stalks the European and American landscape that ‘Paki’ need not be a four-letter word. Without uttering a word about politics, the Red Cross display graphically gave the lie to Suu Kyi’s claim that the Myanmar government had not engaged in any “armed clashes or clearance operations”. There was no mention of the Tatmadaw, the all-powerful military founded by Suu Kyi’s revered father, which maintains its grip on the government through the home, defence and border affairs ministries, 25 per cent of parliamentary seats and a vice-president. The Tatmadaw’s beatings, killings, evacuations, organized gang rape and arson have driven more than 900,000 Rohingyas into exile in Bangladesh. More than 100,000 are virtual prisoners in domestic camps. Others have fled to Thailand, Malaysia, Indonesia, Pakistan and even Saudi Arabia. India was the main hope but today’s India is unlikely to set morality above pragmatism or sympathize with Muslim victims of racism.

The exhibition’s little mock-up of the Kutupalong refugee camp — said to be the world’s biggest — in Cox’s Bazar conveyed little of the squalor and despair that haunt such habitations. The young British boys and girls on duty were amiable but not very knowledgeable. Yet, the taped narration of three survivors brought home to the shoppers who wandered in casually something of the perils of the Rohingya’s 14-day trek to freedom. A pitiful display of household goods moved visitors to pull out wallets and credit cards.

Despite England’s imperial past, the English individually respond humanely to perceived injustice. I learnt yesterday of a Punjabi woman without a word of English who flew in claiming persecution and, not content with £70 a week and a flat, is suing the government for a house. A Second World War legend claimed that when the American military insisted on segregated pubs, defiant Lancashire landlords put up ‘Black Troops Only’ signs. Hungary and Czechoslovakia caused as much anguish as apartheid and Vietnam. ‘Stop Killing Tamils’ read an obscure notice in London’s Portobello Road long before Sri Lanka’s civil war made headlines. I remember a solitary black man holding a placard amidst the swirling Saturday evening crowds in Manchester’s St Peter’s Square, scene of the Peterloo massacre 200 years ago, pleading for Jimmy Wilson who awaited the electric chair for petty theft in a southern American state. His name meant nothing to the merrymakers who stopped to sign the petition for a reprieve for the same reason that people gave money for the Rohingyas.

It is assumed Suu Kyi dare not speak up for them lest the Tatmadaw deprive her of whatever authority she enjoys. An even less flattering explanation for her silence on what UN officials call a crime against humanity would be that she probably shares her countrymen’s aversion to the darker-skinned Rohingya whom Myanmarese call Indian. Maurice Collis, a perceptive and kindly member of the Indian Civil Service who spent 22 years in Burma (as the country was then called), courageously braving British and Burmese wrath, mentions public rejoicing when Indians were massacred on May 26, 1930. “They had shown the Indians their place... Well, they had been taught a lesson! Short of violence to the Indians, these views were shared by upper class Burmans, the clerks, the officials, the graduates, and the landowners.” Jumping to the present, the State Counsellor may be at one with the rest of Myanmar’s elite.

“I didn’t think that there was any objection to killing Indians,” a young Burmese told Collis in 1930. “The government is against them.” Adding that the Burmese “believed” the British were “on their side”, Collis admits that some British officers had no time for Indian settlers whom “the Burmese regarded as little better than rats, which had swarmed into the country to the detriment of the working classes of the native population”. At least 500 Indians were slaughtered in the 1930 riots, their homes vandalized and looted; 7,000 others cowered in terror in accommodation meant for just 500 in Rangoon’s old lunatic asylum. Well might they fear for their lives for Indians “had been hunted around the town like vermin and their women ripped up”.

Rohingyas trace their history to the eighth century. But the Tatmadaw stripped most of them of citizenship in 1982. Human Rights Watch reckons that the 1982 laws “effectively deny” them “the possibility of acquiring a nationality”. They are not one of Myanmar’s “national indigenous races”. They can’t move about freely, and are denied access to education and civil service jobs. Their legal subjugation has been compared to South Africa’s abhorrent apartheid. Regarded as illegal Indian immigrants, they are the last reminder of the Indian labourers, clerks, teachers, lawyers and officials who were evicted when Burma became independent.

According to W.E.B. Du Bois, the radical African-American scholar and founder of the National Association for the Advancement of Colored People, the problem of the 21st century is the problem of colour lines. That is certainly at the heart of young Javed’s dilemma. The film based on Sarfraz Manzoor’s memoir, Greetings From Bury Park, can be treated as any young British-Pakistani’s search for himself in an adopted environment. It mirrors Chadha’s highly successful Bend It Like Beckham, released in 2002, with boy instead of girl and Muslim replacing Sikh. There, football was the catalyst and solution; here it’s Springsteen’s music. Paternal authoritarianism and the clash of cultures are common themes. The incipient racism of Bend It Like Beckham is developed in Blinded by the Light into a full-blown confrontation with violent episodes and a marked difference between how Javed and his father (and father’s friends) respond to discrimination. The other generational difference in both films is in the attitude to sex: kissing across the colour bar is the mark of both liberation and achievement.

The ultimate message is of hope as footballer and writer conquer disability to set out on the road to success. Where does that leave the Rohingya? The memorandum of understanding Myanmar and Bangladesh signed in November 2017 didn’t achieve much in the absence of convincing guarantees and honest supervision. To enable their return with dignity is a role that awaits Aung San Suu Kyi if she wishes to justify the honours that have been heaped on her. Only by ensuring that the refugee’s is not a one-way trail can she convince the world that colour doesn’t determine her humanity.