The pandemic holds out big challenges to the entire political class 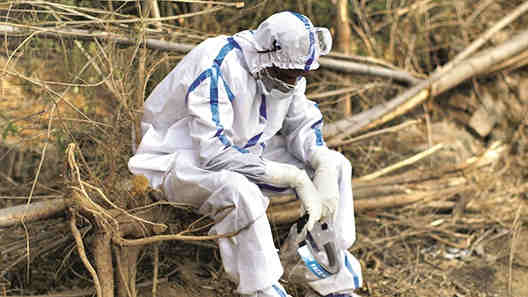 In its initial phase, the second wave of the Covid-19 pandemic left a trail of devastation across India, leading to the Narendra Modi government being at the receiving end of international media outrage and charges that the authorities had taken their eye off the ball. However, the discomfiture proved remarkably short-lived. Starting with the mass vaccination programme that was initiated in mid-June, the government regained its old sense of purposefulness and this paid handsome political dividends in the district body elections in Uttar Pradesh — interpreted in some political circles as an important pointer to the state assembly elections next year.

The confidence of the Modi government was on full display in the Rajya Sabha debate on Wednesday on the state of pandemic management in India. While there was all-round concern that the much-awaited third wave would hit India, it was also tempered by the optimism that the hiccups witnessed during the initial stages of the second wave wouldn’t be repeated. Compared to, say, the United Kingdom, where there are alarmist suggestions that the Covid-19 tally in the third wave would be as high as 200,000 new infections each day, the official reaction in India was one of quiet confidence — an approach that shouldn’t be equated with denial.

The confidence appears to be based primarily on the progress of the vaccination programme that began in mid-June. According to official figures released by the Union ministry of health and family welfare, the total number of people vaccinated (by either a single jab or both) was 41.18 crore as of July 20, with more than 50 lakh people being added each day. Without necessarily falling back on Boris Johnson’s evocative imagery of vaccines being the “cavalry over the hill”, it would seem that India, too, is confident that the third wave will be met by a human wall of the vaccinated. Certainly, without specifying a date by which India could be declared safe from the killer effects of a constantly mutating coronavirus, the new minister, Mansukh L. Mandaviya, reeled off data to suggest that India’s vaccine production capacity would be able to considerably narrow the existing gap between supply and demand.

The Modi government is also understandably proud of the Pradhan Mantri Garib Kalyan Package that provides free basic rations of five kilogrammes of wheat or rice and a kilo of pulses to nearly 80 crore individuals or nearly two-thirds of India’s population. In addition, there have been direct cash transfers of varying amounts to farmers, women with Jan Dhan bank accounts, senior citizens and the disabled. The comprehensive relief package of Rs 1.70 lakh crore has certainly been a significant welfare cushion for large numbers of people who have seen their lives adversely affected by the pandemic and the enforced restrictions on normal life. Although criticized by some economists and Opposition parties for not favouring more cash transfers that can accommodate individual priorities, the Garib Kalyan package can be said to broadly correspond to an observation by the economist, Abhijit Banerjee, that: “The goal of social policy, in these times of change and anxiety, is to help people absorb the shocks that affect them without allowing those shocks to affect their view of themselves.”

The government’s ability to hold a nation’s nerve is likely to be of some importance in the coming days. With the second wave having spread to rural India — nearly 50 per cent of all new cases are being reported from villages — and vaccine hesitancy being the most pronounced outside urban clusters, there is concern over what form the third wave will take in India. Additionally, the long-term after-effects of Covid on the health of individuals may pose problems for the overall health of the country. All in all, there is a growing concern that a virulent third wave could have a more serious effect on the country’s health and economy than the previous two waves of the pandemic. As the virus tries to keep a few steps ahead of the human determination to survive, the projection among Western optimists that post-vaccination, “Covid-19 has been downgraded as a nasty bug which is now no more lethal than viruses such as influenza” may not necessarily be applicable in the Orient.

All this is in the realm of conjecture since clarity on the third wave hasn’t been forthcoming. This makes it imperative that in the political sphere at least, India bolsters its defences and irons out the rough edges that have either plagued the political class elsewhere or been exposed at different times since the big lockdown of March 2020.

The first is flexibility and open-mindedness, particularly in the realm of health policy. In theory, all governments claim to be guided by the advice of scientists and other domain experts. The first lockdown, for example, was dictated by the need to ‘flatten the curve’ by trying to minimize interaction between people. It was meant as a short, sharp, shock treatment and was part of an international trend stretching from Europe to China. The results were mixed, although in the case of India, the national freeze provided the breathing space for upgrading medical facilities and developing capacities in basic medical equipment. However, there was never any unanimity among the experts, and this discord extended to the treatment of Covid patients and the choice of vaccines. Since medical science itself evolved rapidly and often in conflicting directions, policymakers had to be open-minded and guided by flexibility. Certitudes ran the risk of travelling in a completely wrong direction.

Secondly, the management of a pandemic has involved revitalizing the State and putting it at the forefront of social and political interventions. The efficiency and integrity of the public distribution system and public health bodies have been tested and, of course, need further improvements. At the heart of the matter is the need to enhance public trust in the State. The two principles that should determine the way forward are transparency and fairness.

The pandemic holds out big challenges to the entire political class. The integrity of public reporting has been imperfectly established. Only too often, particularly in the initial days of the pandemic, Covid deaths were seriously under-reported. Again, in the management of containment measures, there has been a tendency to be discriminatory and even use provisions of the Disaster Management Act to settle political scores. There have been accusations, not least in West Bengal, of people being excluded from the vaccination programme on account of their political preferences. Partisan conduct affects the standing of the State for fairness and, ultimately, affects public trust in the State and its institutions. This needs to change.

Finally, the Constitution has stipulated that health is a state subject. However, it has always been clear that state governments with limited monetary and human resources were never going to be successful in meeting the Covid-19 challenge by upholding regional autonomy. The insistence of, say, the West Bengal government to purchase vaccines globally turned out to be an empty boast and had to be quickly abandoned. The challenge has necessitated a growing dependence on the Centre. Yet, the shift has been grudging and even graceless. Consequently, the absence of coordination and mutual reliance has been evident. The seriousness of the threat confronting the nation and, indeed, all of humankind means that petty one-upmanship must be eschewed — at least until this war on the virus lasts — and replaced by an inclination to march to a common tune. This again demands a mindset transformation.