Bloodshed is all but certain, and tension with Pakistan will soar 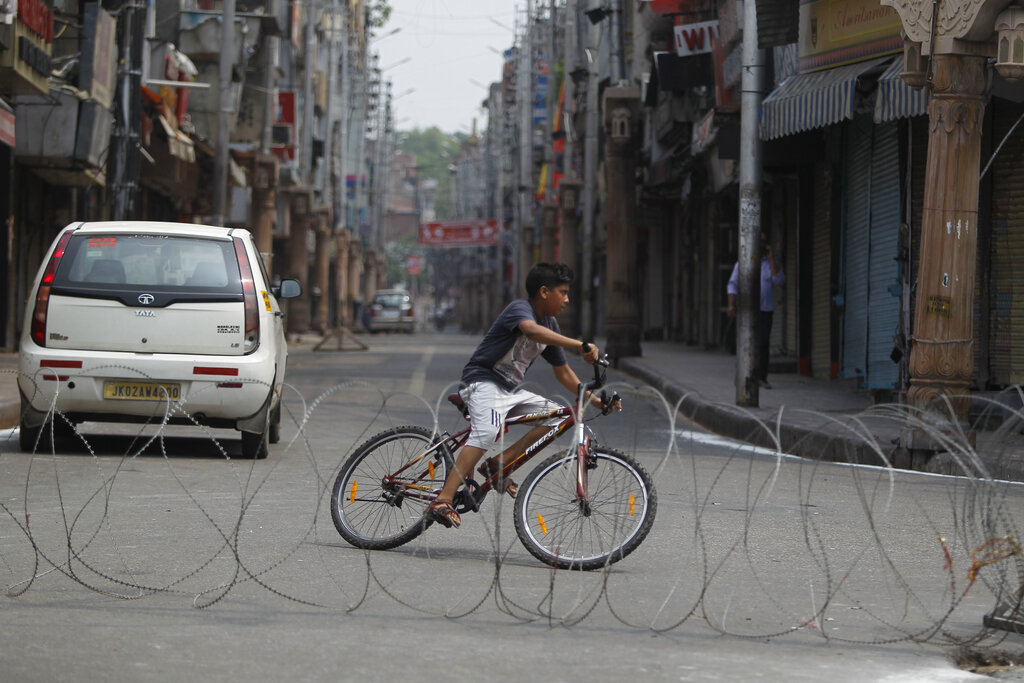 A boy cycles past barbed wire erected as part of security restrictions in Jammu, on Tuesday, August 6, 2019. The Lok Sabha was set to ratify a bill on Tuesday that would downgrade the governance of the Muslim-majority state of Jammu and Kashmir amid an indefinite security lockdown
(AP Photo)
The New York Times Editorial Board   |   Published 06.08.19, 09:59 AM

The Indian government’s decision to revoke the semiautonomous status of Kashmir, accompanied by a huge security clampdown, is dangerous and wrong. Bloodshed is all but certain, and tension with Pakistan will soar.

The Himalayan territory of Kashmir has long been the central source of friction between India and Pakistan and a hotbed of separatist aspirations. Rival claims to Kashmir have led to two wars and frequent eruptions of violence and terrorism over the past seven decades, made all the more menacing by the nuclear arsenals of India and Pakistan. Only in February, a Kashmiri suicide bomber struck an Indian military convoy, prompting a tense military standoff and aerial dogfights between India and Pakistan. After an earlier such incident, former president Bill Clinton dubbed Kashmir “the most dangerous place in the world.”

The Indian government knows how incendiary its actions are, which is why, before making the announcement Monday, it ordered tens of thousands more troops into Kashmir, put major political figures under house arrest, ordered tourists to leave, closed schools and cut off internet services.

The government claimed it was acting to prevent a planned terrorist attack. But Prime Minister Narendra Modi and his governing Bharatiya Janata Party, deeply rooted in Hindu nationalist ideology, have long made no secret of their intention to revoke the articles in the Indian Constitution granting the predominantly Muslim Kashmir a special status — a move the BJP sees as “correcting a historical blunder.”

Article 370: What are the legal questions

That “blunder” began with Britain’s 1947 partition of its Indian colony into a Hindu-majority India and a Muslim-majority Pakistan. The status of what was then the principality of Jammu and Kashmir was left undecided. India and Pakistan soon fell to blows over it, which ended with Pakistan occupying roughly a third and India two-thirds, divided by a heavily armed and bullet-riddled “line of control.” India’s side was granted a relative degree of autonomy in exchange for accepting Indian rule.

The United Nations recommended holding a referendum to let Kashmiris decide their fate, but that never happened. In later years, Muslim militants, often backed by Pakistan, joined the fray, striking at Indian troops in Kashmir and at targets deep inside India, including a multi-day killing rampage in Mumbai in 2008 that left more than 160 people dead.

In this volatile stew, India’s latest action provoked instant vows of resistance. The Kashmiris are especially incensed by the lifting of a ban they had long imposed on the purchase of land by nonresidents, to prevent their land from being bought up by Indians. “There will be chaos if our identity is compromised,” vowed Mehbooba Mufti, a former chief minister of Jammu and Kashmir. In neighboring Pakistan the sabres were quick to rattle. “Pakistan will exercise all possible options to counter the illegal steps,” declared the Pakistan foreign ministry, while Shahbaz Sharif, the leader of the political opposition, thundered that “Kashmir is the jugular vein of Pakistan, and anyone laying a hand on our jugular vein will meet a frightful end.”

The fray is not without global implications. Under President Donald Trump, the United States has shifted its favours from Pakistan, a long-time recipient of U.S. aid, to India, which the administration perceives as a bulwark against China. China, meanwhile, has become an ally and financial patron of Pakistan.

There is still a good chance that the changes to the constitution will end up before India’s Supreme Court. But the fires are lit. The United States and China must not allow Kashmir to become a pawn in their ongoing disputes; on the contrary, the United States, China, the United Nations and other powers with influence over India and Pakistan must urgently do what they can to prevent India’s folly from escalating into a perilous and unpredictable regional crisis.