Releasing women prisoners must be a priority during Covid-19 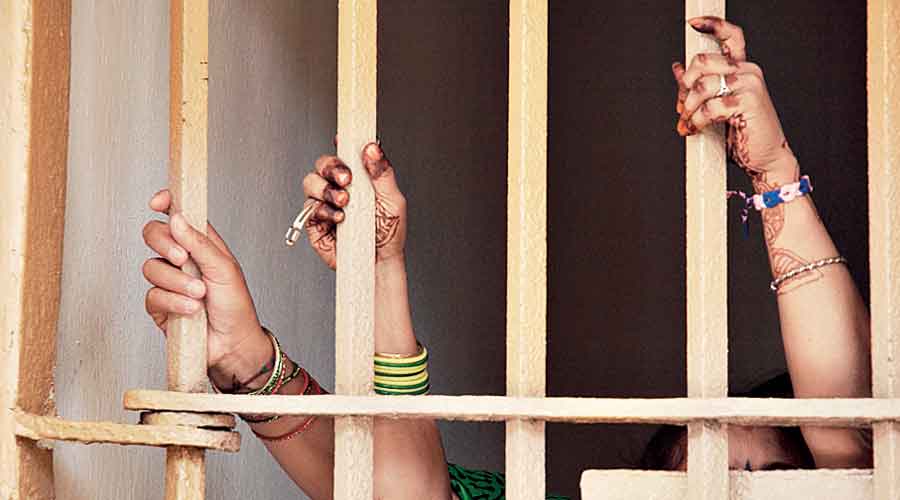 Is it right, is it fair, is it even legal to distinguish women prisoners from men prisoners?
File picture
Gopalkrishna Gandhi   |   Published 19.07.20, 12:25 AM

Last month, I wrote in these columns on the need to decongest our prisons in our Covid-19 times. And I pointed to the number of undertrial prisoners in our prisons with whose monitored and urgent release the process can start. I write today about another category of prisoners most of whom are also UTPs. I write about women in prison, proposing that their release be seen as a priority within the urgency of releasing the larger population of UTPs.

I can hear, at once, in my mind an objection being raised (in a chorus of male voices, needless to say): crime is crime; a prisoner is a prisoner. Is it right, is it fair, is it even legal to distinguish women prisoners from men prisoners?

In the abstract, no. It is not right. The law is blind to gender. It knows only guilty and not guilty. And yet a tiny window is open for the law to adopt a different way, shall we call it, with women accused. A proviso to Section 437 (1) (ii) of the CrPC provides for special dispensation to women and children below the age of 16 years in the matter of granting of bail. That proviso is, in my view, a little shaft of oxygen that gives hope of some life to my argument.

Next, going beyond the abstract to the real, the fiery world of India’s social realities. I can imagine being asked (this time in many male with a few female voices, in unison): is it not true that a number of women — mothers-in-law and sisters-in-law — have been found guilty and convicted for bride-murder over the hideous custom of dowry?

This is true. In prison visits I have had the occasion to meet and speak to women convicts serving terms for abetting, instigating and perpetrating bride-burning over dowry. They were stony-hearted, impenitent.

And yet, I would say with every emphasis I can command that a distinction needs to be made. A distinction that is not in the nature of affirmative discrimination but in recognition of biological, sociological and ideological truths.

The Supreme Court of India, in a salutary and most welcome move in ‘Contagion of Covid 19 Virus in Prisons’, has directed the constitution of high power committees under each high court to oversee the decongestion of prisons during the pandemic. Pratiksha Baxi and Navsaran Singh, in an incisive article in The India Forum (updated July 10, 2020), tell us that the court noted that “prisons can be fertile breeding grounds for incubation of Covid-19.”

The Supreme Court be blessed for stating this important truth simply and strongly!

But the wheels of implementation  — even of a Supreme Court directive — move slowly.

The principle of equality is not offended in what I am suggesting. Equality is not about uniformity. It is about justice, and it is justice in and through equality that makes me propose that prisons faced with the grim prospect of the pandemic seeping into their congested spaces should release their UTPs under the amended CrPC with women prisoners being given an absolute and immediate priority.

The first reason can, for sheer simplification of argument, be called ‘biological’. Though crime is crime and a prisoner is a prisoner, the woman does happen to be different from the man just ‘in the way she is’. I am not attempting a biomedical stance here, nor entering some arcane zone of biochemistry. And I am not portraying her as the ‘weaker sex’, the quintessential abala. Women are in a sense less strong than men but they are not weaklings, or less ‘abled’ than men. I am only adverting to the norm of civility that makes men in a sinking ship or a crash-landed aircraft have the evacuation principle of ‘women and children first’. The norm of women (and inseparable from them, their children) being given the privilege of monitored release for obviating Covid-19 priority continues the same norm. And this has to have stemmed from the fact that women menstruate, can become pregnant, lactate, undergo menopause. And in all those recurrent and inescapable conditions are inherently enfeebled and vulnerable to physical distress including, very specifically, emotional distress. Her physical and emotional constitution entitles the female of the species to a level of care above that of the male.

The second reason is about us as a society. Our commonly shared spaces are the field of an essentially male psyche. I do not refer to the architecture of these areas but to the ethos of their control mechanisms, their sociological ecology. Prisons, thanas, detention centres are the most shining examples of this. To quote Baxi and Singh again: “Women inmates in male-defined prisons governed by male rules of incarceration experience specific forms of discrimination, deprivation and violence. Their dignity is stripped as women — menstruating bodies are made to leak and vaginal infections allowed to fester. Their souls broken as women, with strip searches and cavity probes. All women in prisons without distinction of charge, crime or sentence, whether pregnant, lactating, menstruating or menopausal, differently abled or ailing may be thought of as ‘custodial’ minorities.” I might add that they also form a minority in which there is a complete absence of other majority-minority dynamics. In prison, a woman’s first identity is that of a woman and only thereafter any other.

The third reason is ideological. And if that word is regarded as being overloaded, I would use ‘ideational’. And it is as follows: the United Nations Organization has given us the United Nations Rules for the Treatment of Women Prisoners and Non-custodial Measures for Women Offenders. I must confess I did not know of this text until I read Baxi and Singh. But that is not surprising in a no-expert like me. But how well known are these rules to our criminal investigation system, to the law departments at the Centre and states, to advocates and advocates-general? Known also as the Bangkok Rules, these have lifted women prisoners up and out of the ‘general pool’ of prisoners and placed them conceptually at a level that is distinct and deserving of positive discrimination. Women prisoners are prisoners but they are women first and prisoners only thereafter. This principle has been accepted by the world body. It is an ideational stance, a conceptual statement, a credo.

As on June 20, 2020 there are 22,927 women inmates in all prisons in India. The Maharashtra Department of Prisons and Correctional Services needs to be lauded for putting in place ‘the process of decarceration and decongestion aiming to release 17,000 inmates’. This needs to be replicated elsewhere and Covid-19 challenged at the doorsteps of India’s imprisoned population by letting its women and, I would add, transgender inmates out on non-custodial accountability to the law.

In 1914, Valliamma, a young Tamil satyagrahi, died, weakened and ill, shortly after being released from Maritzburg jail in South Africa. She had joined the Great March organized by Gandhi against the iniquitous Pounds 3 poll tax and the odious law, which had derecognized marriages outside the Christian protocol. She lies buried in Johannesburg, a martyr to prison callousness about a woman prisoner’s well-being. Kasturba Gandhi was among the Indian women who were in that jail with Valliamma undergoing a sentence for three months with hard labour. Laundry work was part of what they were required to do. Ill health dogged them. Kasturba herself emerged looking a ghost of her former self. She survived the Maritzburg ordeal and lived to die in another jail 30 years later, in Poona, once again a political prisoner.

An initiative deriving inspiration from the hallowed example of Valliamma needs to be launched without any delay to save women prisoners from becoming martyrs — not to Covid-19 but to male sluggishness about a duty screaming to be performed.