The other side of the Kashmir tragedy 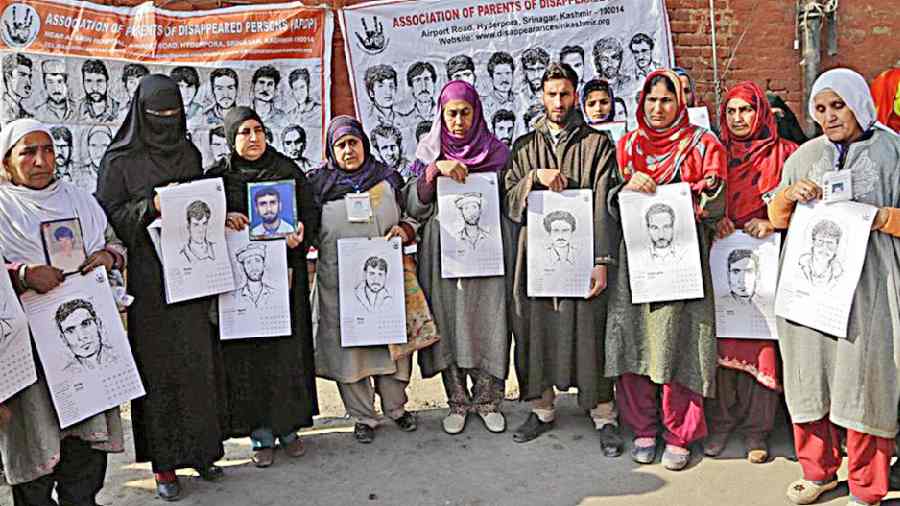 A demonstration by the Association of Parents of Disappeared Persons, Srinagar
File picture
Luv Puri   |   Published 05.07.22, 03:37 AM

The commotion that accompanied the release of the film, The Kashmir Files, is a signifier that the past never leaves the present. While being fully sympathetic to the tragic migration from the Valley, the political context that led to the events of 1990 requires an unbiased and nuanced understanding as it has implications for the future, particularly in the context of regional peace and security.

In his first term as chief minister, Farooq Abdullah, had organised an Opposition enclave in 1983. N.T. Rama Rao, the former Andhra Pradesh chief minister, Jyoti Basu, the then West Bengal chief minister, and others participated in it. The then prime minister, Indira Gandhi, took this as a personal affront that was reflected in a high-voltage campaign by her in the 1983 assembly elections. Another point of tension was the Jammu and Kashmir Grant of Permit for Resettlement in (or Permanent Return to) the State Act, 1982, which was passed by the assembly just days before Sheikh Abdullah died to facilitate the return of former J&K residents and their descendants who had migrated to Pakistan between March 1, 1947 and May 14, 1954.

Indira Gandhi called the Act anti-national although it was considered to be a political gimmick. As residents of J&K who had migrated to Pakistan became citizens of Pakistan, they ceased to be citizens of India and could, therefore, be granted citizenship by the Central government only. In the backdrop of religious polarisation, the National Conference won 46 seats whereas the Congress won 26 seats, 24 of them in Hindu-majority assembly segments.

An obituary of the former J&K governor, B.K. Nehru, who was holding the post at the time, in The New York Times on November 9, 2001 said that Nehru had quarreled with his cousin, the prime minister, Indira Gandhi, over Kashmir. It said, “The quarrel was over Indira Gandhi’s reported demands from B.K. Nehru to facilitate dismissal of duly elected government of Farooq Abdullah. When Mr. Nehru didn’t comply he was sent in 1984 to govern Gujarat.” His replacement was the late Jagmohan Malhotra who had worked with the late Sanjay Gandhi, Indira’s son, during the Emergency in 1975 that resulted in the imprisonment of several Opposition leaders such as the socialist, Jayaprakash Narayan, as well as Jan Sangh stalwarts like A.B. Vajpayee and L.K. Advani.

A few of the NC MLAs were reportedly bribed, allegedly with the blessings of the Congress-ruled Centre, to support Farooq’s brother-in-law, Shah, who rebelled against Farooq within the NC. The Congress with 26 legislators gave outside support to the rebel, Shah, who had 12 legislators to form the government. The next two years of Shah’s tenure were infamously called ‘curfew raj’. After the death of his mother, Rajiv Gandhi made a fresh start with Farooq by signing an accord with him that brought the latter back to power.

The late Balraj Puri had presciently remarked in a newspaper article that the net result of the accord will be that Farooq will go the Surjit Singh Barnala way and Kashmir the Punjab way. His reasoning was that just like what had happened in Punjab a few years ago, the sympathy that Farooq enjoyed after his unceremonious removal on July 2, 1984 had been squandered by him by his capitulation before the Centre.

Internationally, the Soviet Union, India’s main defender at the United Nations on J&K-related resolutions, was defeated in Afghanistan and, later, got disintegrated into various nation states. With mass alienation in the Kashmir Valley and cataclysmic changes in world politics, hundreds of Kashmiri youth crossed the Line of Control for arms-training and returned.

The NC worker, Mohammad Yusuf Halwai, was killed on August 21, 1989. There was a series of targeted assassinations. With the change in government at the Centre in 1989, Farooq’s rival, Mufti Mohammad Sayeed, who had left the Congress to join V.P. Singh’s Janata Dal, became the home minister of the National Front coalition government, which was supported by the Bharatiya Janata Party as well as the Left. Decisionmaking fell victim to personal rivalries among Kashmiri politicians. This was reflected when Rubaiya Sayeed, the daughter of Mufti Mohammad Sayeed, got abducted in 1989. Farooq opposed the decision to release Kashmiri militants — the demand of the abductors for the release of Rubaiya — while the Centre conceded. This boosted the morale of the militants.

The NC saw the appointment of Governor Jagmohan Malhotra as the personal initiative of Mufti Mohammad Sayeed to settle personal scores. As envisaged, Farooq resigned and Jagmohan took oath on the morning of January 19, 1990 in Jammu, which was the winter capital. The same evening, in downtown Srinagar, door-to-door searches were initiated by the security forces. Subsequently, massive protests broke out in Srinagar and there were slogans against the Pandits.

In the midst of fear psychosis, the next day, the migration of Kashmiri Hindu communities began en masse from Srinagar and other places followed. A number of other incidents, in which many Kashmiri Muslims died during protests and demonstrations, intensified the situation. Things continued to worsen in the first quarter of 1990. By the end of Jagmohan’s four-month tenure, the majority of Kashmiri Hindus in the Valley had migrated. As per the 1981 census, there were about 124,078 Hindus in the Valley. The bulk of them were Kashmiri Pandits followed by the Punjabi Khatri community. This was about 4.42 per cent of the Valley’s population. Officially, 219 Kashmiri Pandits were killed in the state from 1989 to 2004. This included the post-1995 massacres of Pandits in Nadimarg, Sangrama, and Wandhama in the Valley in which 54 Kashmiri Pandits died overall. The scale of J&K’s tragedy that has impacted all religions, regions and ethnicities must be put in perspective. S.S. Kapur, the former chief secretary of J&K, as per a Reuters report on November 21, 2008, had informed that more than 20,000 civilians and 7,000 police personnel had lost their lives while 20,000 militants have also been killed.

By the mid-1990s, militancy engulfed the non-Kashmiri-speaking areas. The toll comprised nearly 45 per cent of civilian killings in the first two decade, including massacres in Doda, Rajouri and Poonch. These victims were not as well-connected, well-educated or articulate. Consequently, they have not been able to access public spaces where they can be seen, much less heard.

Knowledge of past turbulence is important. But there is a danger of learning partial or, at times, wrong lessons if one were ignorant of or insensitive to the wider context.

Luv Puri is the author of two books on Jammu and Kashmir, including Across the LoC