Vandals at the Gate 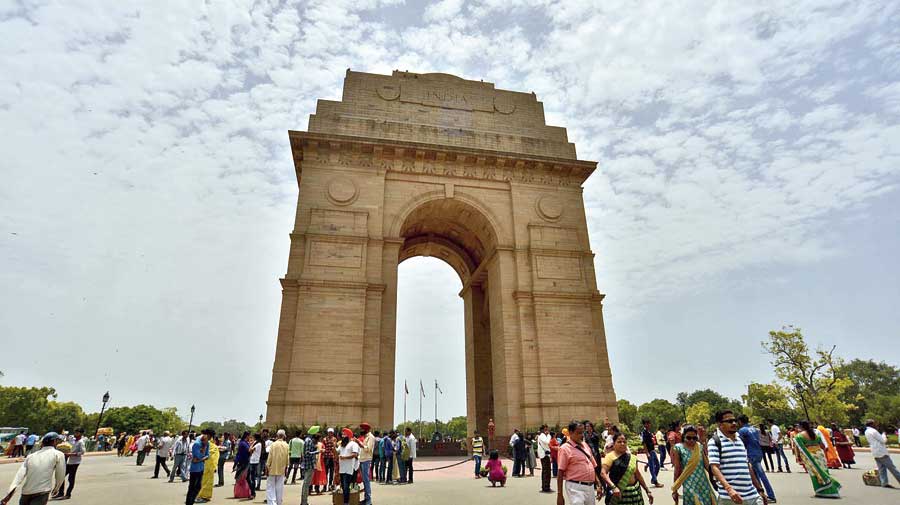 The stretch of road (and the stuff on either side of it) that starts at Rashtrapati Bhavan and ends at the National Stadium is not the Central Vista. It’s just Rajpath and if you’re looking for a shorthand way of referring to it, try ‘India Gate’. Unless you’re an urban historian or an annoyingly knowing person, ‘the Central Vista’ means nothing. Nobody you or I know has ever said to the family, “let’s drive off and have an ice-cream on the Central Vista”. On the other hand, “let’s go to India Gate for an ice-cream” has been the cue for a stock outing for generations of Dilliwallahs.

“Chalo, let’s go to India Gate and go boating.” Boating? Flat-bottomed tubs with oars plied smoothly in a foot-and-a-half of water in a long, shallow channel on one side of Rajpath. You could rent them in half-hour slots which was long enough to feel energetically outdoorsy for a rupee at a time. Four annas afterwards would buy you an orange bar at the Caryhom or Kwality ice-cream cart. Twelve annas fetched a Chocobar. Old people ordered vanilla ‘cups’ and jabbed at them genteelly with flat wooden spoons that looked like tiny oars.

If you lived nearby and had a cycle, there was an amazing straight run from the top of Raisina Hill all the way down to the National Stadium. Just after Baker’s secretariat buildings, Rajpath dipped sharply down to Vijay Chowk and if you approached the slope pedalling fast then freewheeled down it, it felt like the downswing of a Ferris wheel, the breathless high of leaving your stomach behind. This was Delhi in the 1960s, so you could do this safely early in the morning before the office rush or what passed for an office rush in that sedate Ambassador-Fiat time.

The lawns of the hexagon around India Gate were tended but useful. They swarmed with kids playing cricket on the weekend. One section was fenced off for children to play in. Not ordinary play like football or cricket but a special kind of recreation that involved outdoor apparatus — uncommon then — like twisty slides and whirling platforms and jungle gyms. There was a slide with a hump in the middle which was unique and sort of dangerous.

The gate to Children’s Park was made up of two metal doors decorated with two large cartoon rabbits (or hares) facing each other in profile and a sign outside that said adults were only allowed if they were accompanied by children. We were too young to be cynical about this sort of cuteness, so we genuinely thought it was a special place where the natural order of things was turned upside-down.

Sarkari New Delhi was a small place then and most of it was no more than a 20-minute cycle ride from India Gate. My brother and I ended up cycling on Rajpath a lot because it was on the way to useful places. Mostly we turned right on to Rafi Marg because it led to the All India Fine Arts & Crafts Society building, or AIFACS. We had no interest in arts or crafts but the British Council Library was located there. We loved the frigidness of its air-conditioning and its electrically cooled water dispenser. Sometimes my brother and I (riding pillion) would turn right and keep going past the AIFACS building, then turn left on to Parliament Street till we reached the General Post Office. We did this to queue up and buy freshly issued First Day Covers which we collected because others did.

You almost never turned left off Rajpath unless you wanted to voluntarily visit the National Museum, which no one in his right mind did. Outside the building there was a discouragingly ugly sculpture of an Ancient Indian Woman standing with her hand on her knee and a pot balanced on her hip and inside, the premises smelt of phenyl and lavatories.

For all the grandness of this imperial vista, no one was impressed. George V stood under his canopy looking absurd on account of his vandalized nose till he was extracted and exiled to Coronation Park. The gravitas of the War Memorial was lost on us because we didn’t know it was called that. We thought it was some sort of republican portal. In less than 20 years after decolonization, the republic had erased the colonial provenance of the arch and everything around it by assimilating it to Bharat, that was India. If we thought about the ‘central vista’ at all, it seemed to us like a permanent set, purpose-built for hosting the Republic Day parade.

During the jamun season, the parkland on either side of Rajpath felt like an orchard. Even as rows and rows of jamun trees dropped their fruit on the grass, you couldn’t just reach down and eat them because the produce had been pre-sold to contractors and their watchmen guarded their harvest with menaces to keep loafers like us away. The lovely thing about India Gate was that it was useful, accessible and given over to free (or cheap) public recreation.

Given the near-uniform awfulness of Delhi’s post-independence public architecture, it was a good thing that the open spaces on either side of Rajpath remained unbuilt. The newish building that houses the ministry of external affairs is a cautionary tale. It tries to blend in by aping Lutyens’ neo-classical idiom but its pustule dome and its brown-tinted glazing make it look like a shady encroacher.

The prime minister’s plans for Rajpath and India Gate are on another scale. When he’s finished with it, we’ll have two Parliaments for the price of one. One of his predecessors, Muhammad bin Tughlaq, ruined Delhi trying to transfer the capital to Daulatabad. His next brainwave was reforming the Delhi Sultanate’s currency; that didn’t go well either.

In his homage to Tughlaq, Narendra Modi cunningly reversed this catastrophic sequence; he started with the currency. Having purged the economy with his killer cure, demonetization, he has now, in a bold and original move, decided to wreck the capital without transferring it. By building a new Parliament in front of the old one, and building offices on either side of Rajpath, he plans to photo-bomb our collective memories. Planting babus and buildings where people used to gather and play, making Rajpath and India Gate unrecognizable, is his road map to immortality. To thwart him we should remember India Gate as it was and set it down. Here, as always, Kundera is our guide: “The struggle of man against power is the struggle of memory against forgetting.”