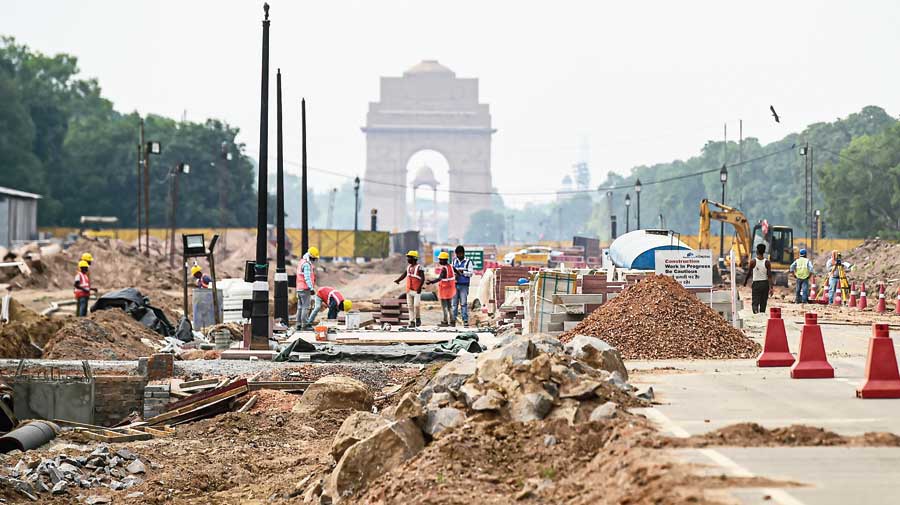 Central Vista construction going on in New Delhi on Thursday. The urgency accorded to the vanity project amid the pandemic has drawn widespread criticism.
PTI
Amit Roy   |   London   |   Published 07.05.21, 12:31 AM

A British newspaper has taken “India’s narcissistic Prime Minister” and “shameless demagogue” to task for building a Central Vista in New Delhi while “within a mile or two, people were still dying for lack of care in the dusty streets”.

On a two-page spread on Thursday, The Daily Mail wrote: “The monstrous monument to Narendra Modi’s ego: As millions suffer in pandemic, India’s narcissistic Prime Minister is building a vast folly at a cost that could fund 40 major hospitals. Now his nation is in uproar.”

It remains to be seen whether the Indian government responds to the article, especially with Modi expected to attend the G7 summit in Cornwall from June 11 to 13 as British Premier Boris Johnson’s guest.

The article, written in London by staffer David Jones with inputs from Delhi by Amrit Dhillon and Sanjay Jha, tells readers: “This week, as a disastrous second wave of the pandemic continues to sweep through India, demands for the project to be halted have become more strident, even though Modi, who tacitly controls much of the media, has largely succeeded in keeping cameras away from the vast site in central Delhi.

“Despite the death and despair all around him, however, this shameless demagogue — who on Tuesday agreed a £1 billion trade deal with Britain during a virtual summit with Boris Johnson — insists that the drive to complete the new building, derisorily dubbed ‘Modi’s Dream’, must continue apace.”

The article adds: “Ludicrously, having all too belatedly placed the rest of Delhi in lockdown, he has even decreed that erecting this monument to his colossal ego must be classed as an ‘essential service’. The huge construction site has thus been exempted from Covid restrictions along with supplying food and tending the sick.

“So, as Delhi’s 30 million desperate citizens beg for oxygen and hospital beds, and cremate their loved ones on makeshift funeral pyres in car parks, and as bodies lie in the potholed streets, some 2,000 workers continue to be bussed in each day to toil in a chaotic-looking crater bigger than 50 football stadiums.”

It goes on: “Modi is being held personally responsible for causing India’s catastrophic coronavirus second wave by encouraging — and personally addressing — mass political rallies, permitting crowds at cricket matches, and giving his blessing to a Hindu festival which drew nine million people to the banks of the Ganges.

“His reckless and ignorant pronouncement instilled disastrous complacency in the Indian people, compounded by the Delhi government’s utter lack of preparedness for the apocalyptic rebound.”

Some readers have challenged the article.

“What India does is India’s business,” was one comment. “More important is to trade with the world’s largest democracy and not China.”

“Well done Modi the current Parliament does not serve its purpose which was built in 1921 under the empire,” said another. “India has not asked for loan from GB even though you looted billions.”

Another reader wrote: “The new proposed building is required to accommodate larger number of MPs not far away once the delimitation exercise is complete. So, yes the timing and its optics are plain bad. One would have barely noticed this in normal times but alas we are living in a highly abnormal time and I guess in the next general election he will pay a high price for it.”

A fourth wrote: “Modi has done wonders for India — pretending otherwise is wrong.”

The article has to be set partly in the context of the “culture wars” raging in Britain for over a year. The Mail has opposed those who have sought to “rewrite” the history of the Empire to show it was entirely an evil enterprise.

The article expresses anger that the capital designed by the “Surrey-born architect Sir Edwin Lutyens, the centre-piece of which is a circular Parliament House combining classical and Mughal styles”, is being overshadowed.

It says: “The vainglorious man who now presides over the world’s biggest democracy, Prime Minister Narendra Modi, is determined to expunge this symbol of despised colonial rule and build its replacement far more quickly.

“In August 2022, when India celebrates its 75th year of independence, he aims to open a garish new Parliament resembling a triangular wedding cake, the enormous scale of which will obscure Lutyens’s masterwork. In a seemingly vengeful act, the magnificent chamber Lutyens created will become a mere museum.... However, the revamped Central Vista will become a symbol of Modi’s much-vaunted ‘New India’.

“To (sculptor) Anish Kapoor, the project is ‘Modi’s way of placing himself at the centre and cementing his legacy as the maker of a new Hindu India’. He claims the plans were passed ‘without due process’.”

Readers are told the project “will include futuristic offices for its political secretariats, an underground railway, and an opulent mansion for the 70-year-old Premier, which was quietly slipped into the plans after they had been approved”.

The article is unlikely to influence the British government’s policy towards India, which is always based on enlightened self-interest.

But apart from damaging Modi’s standing, it may make the British people, normally very generous, less willing to make donations to India in its hour of need.

“And the cost of this hideously ill-timed exercise?” the article asks. “Initial estimates suggested it would be an eye-watering £2 billion, but those familiar with India’s often corrupt and wasteful public building programmes suggest the final bill could be twice that amount. Even assuming it is ‘only’ £2 billion, it is a sum India sorely needs for other uses, as its health system collapses and it is forced to put pride aside by accepting international aid.

“If Mr Modi needs reminding how the funds for his Vanity Palace could be redirected, Derek O’Brien, an MP with the Indian Opposition party Trinamul Congress has done the maths for him.

‘You could have vaccinated 80 per cent of the population of India for what you’re spending on that project,’ he declared angrily a few days ago.”

The author adds his personal take: “By my own estimate, that £2 billion could also pay for 40 large, fully-equipped hospitals. The number of oxygen cylinders, PPE outfits and remedial drugs it could buy is vast.”

The article seeks to psychoanalyse Modi’s motives: “The big question, of course, is why Modi is risking his reputation, and indeed perhaps his position as leader, by continuing with this grandiose scheme. For whatever else he might be accused of, this charismatic populist is nobody’s fool.

“Even his enemies don’t suggest, then, that he is in power to line his bank account, like so many other Indian politicians. Nor that he is building the monstrosity in New Delhi because he hankers after its creature comforts. Materialistic he is not.

“According to expert India-watchers, however, what Modi has craved since his days as a youthful revolutionary is recognition. Further, they say, he harbours an almost messianic desire to assume a place in the pantheon of great Indian statesmen alongside Gandhi and Nehru.”

Vista: when vanity project is put above oxygen