Protesting farmers are reclaiming the idea of the nation 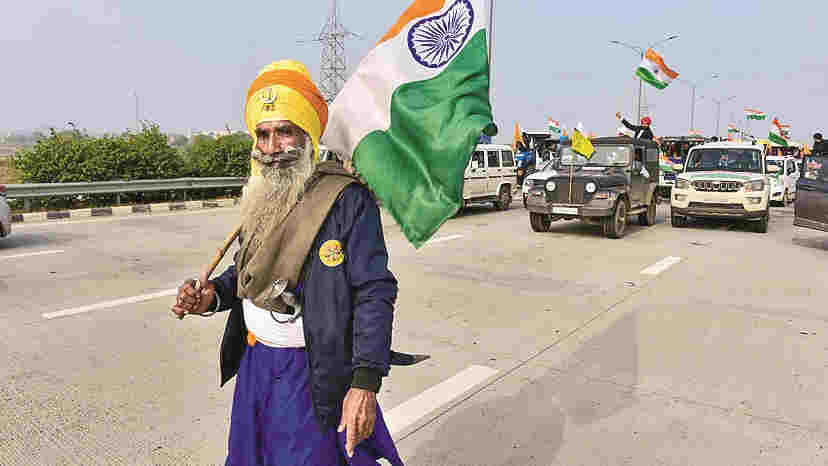 A 'Nihang' holds the Tricolor during farmers' tractor rally as part of their ongoing protest against the new farm laws, at Dankaur in Gautam Buddha Nagar District, Thursday, Jan. 07, 2021.
PTI
Prabhat Patnaik   |   Published 13.01.21, 01:04 AM

Such a shift is precisely what the agricultural legislations aim to bring about. Government economists defending the laws have been emphasizing the benefits of such a shift. The government here is not mediating in a conflict of interests among the people; it has, apparently, its own interest, which it is imposing on the people, on farmers and consumers alike, against which the farmers are agitating in the bitter cold of Delhi. It is a bizarre case of government versus the people at large, not people versus people.

But what could be its own interest? While it is obvious that its own interest coincides with the interest of corporates and international agribusiness, the government’s answer would be that it is upholding the ‘national interest’. Corporate interest is thus identified with ‘national interest’. This has been the hallmark of the Narendra Modi regime, and it is symptomatic of the Corporate-Hindutva alliance of which Modi is the architect and which keeps him in power.

The bizarreness of the situation is this: even right-wing governments justify their pro-corporate policies by claiming to defend the interest of some section of the people. Margaret Thatcher’s attack on trade unions was defended by her as a means of controlling inflation that trade unions allegedly caused and that hurt large masses of the people. But in India we are seeing the unilateral and gratuitous imposition of a set of measures that no segment of the people has ever demanded, measures that portend the dismantling of the public distribution system, which is opposed by people at large, and against which vast numbers are vehemently protesting; all this just to promote corporate interest. This is unprecedented in a democracy.

The government will claim that since it won the 2019 parliamentary elections, it has the mandate to bring in the ‘reforms’ it wants. But this is erroneous for several reasons. First, it is wrong in principle: winning an election does not give the government the mandate to do whatever it likes. Second, this is especially so because the 2019 elections were not fought on the issue of ‘agricultural reforms’. In fact, these reforms never figured in the ruling party’s electioneering, which focused on the Pulwama attack and the Balakot air-strikes. Third, there has been a commoditization of politics where even having a majority in the legislature has lost much significance.

Fighting elections itself has become extraordinarily expensive. Causing defections from the opponents before elections has become common and is also expensive. And no matter who wins the election, defections are engineered from other parties for a price to get the required majority to form the government. For all these reasons, the party with the largest amount of money has a clear edge over the others; and since the corporates are the main source of such money, forging an alliance with them becomes essential for coming to power for which they have to be offered a quid pro quo. Hindutva forces, with their communal-polarizing agenda and corporate financial backing, can exercise hegemony in such a world of commoditized politics. The quid pro quo offered to them includes, inter alia, control over peasant agriculture.

While corporates as a whole gain from such ascendancy, one segment among them, an upstart segment, usually gains more than the other, more established, segments. Daniel Guérin (Fascism and Big Business) had shown that in Germany in the 1930s, a segment of monopoly capital, engaged in producing armaments and producer goods, had become special beneficiaries of the corporate alliance with the Nazis compared to the older segment engaged in textiles and consumer goods. In Japan, new houses, the shinko zaibatsu, benefited more than older houses like Mitsui from the fascistic regime that came to power in 1931, with which the corporates had close relations. While contemporary India is different from 1930s Germany or Japan, a similar privileging of a segment of new corporate houses can be detected here too. This is attracting the special ire of the farmers.

Modi prepared the ground for identifying corporate interest, especially the interest of this nouveau segment, with the national interest by calling the corporates “wealth creators”. He meant the ‘nation’s’ wealth. By this description alone, he raised amassing private wealth into a national service, and those who amassed such wealth into privileged members of the ‘nation’ whose interest deserved the highest priority. It followed that all segments of the population must be made to accede to the demands of these upstart corporates; it is in the interest of the population itself, as wealth-amassing by these corporates supposedly benefits all.

This, however, constitutes a betrayal of our anti-colonial struggle. The concept of the ‘nation’ that had developed in Europe in the wake of the Westphalian Peace Treaties in the seventeenth century had been imperialist, non-inclusive (it had located an “internal enemy”), and, supposedly, deserving of apotheosis by the people who were only supposed to make sacrifices for it. By contrast, anti-colonial nationalism in countries like India was a very different sui generis, phenomenon. It saw the nation as being inclusive, of which secularism was an integral part; and it saw the raison d’être of the nation in improving the lives of the people. The concept of the nation implicit in the Modi government’s understanding is the very opposite of this and is closer to the aggrandizing concept of Europe whose logical culmination was fascism.

The peasants gathered around Delhi are opposing the Modi government’s world-view in every respect. They are upholding secularism, as is evident from the fact that Hindu, Sikh and Muslim peasants are standing shoulder to shoulder. They are, in their opposition to corporate encroachment on agriculture, denying the identification of the ‘nation’ with a bunch of corporate houses. By standing up for the public distribution system, they are seeing the raison d’être of the nation as consisting in serving the people. The peasant movement is reclaiming the concept of the nation from the Modi government that had hijacked it.